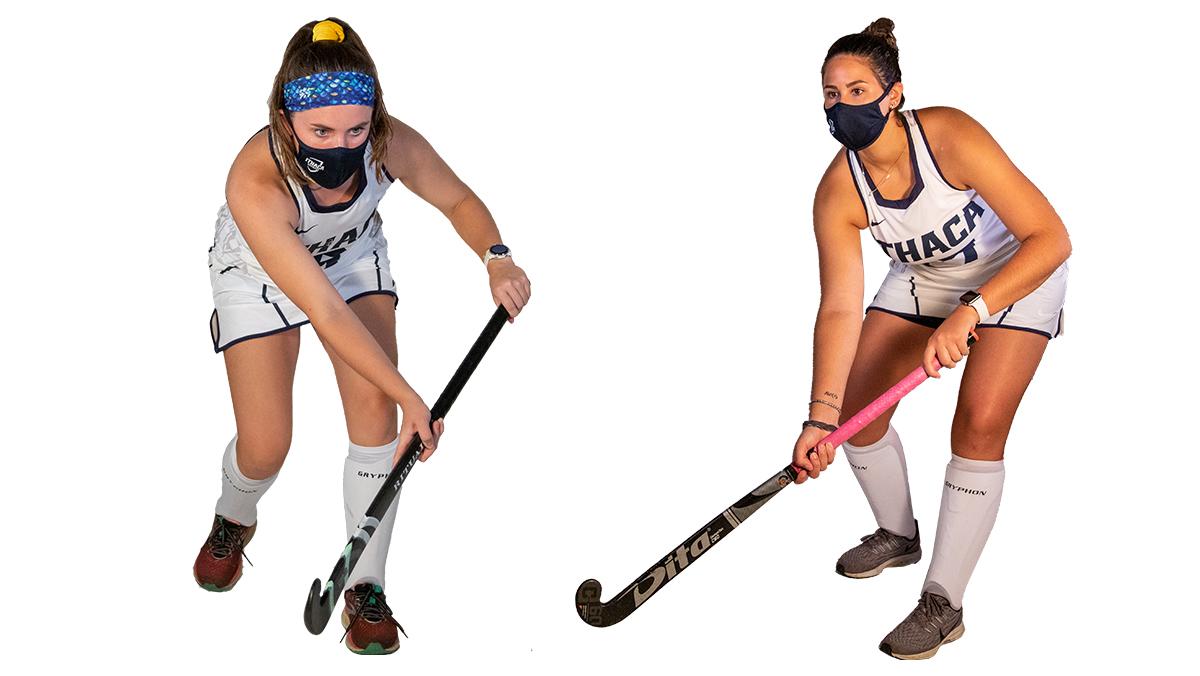 With the canceled 2020 season behind them, the Ithaca College field hockey team is looking ahead in preparation for the 2021 season.

Currently, the Bombers have a full season scheduled with their usual competitors from the Liberty League and other Division III teams in the area. Other than the fact that masks are required while indoors, this season is anticipated to be the same as any other prior to the COVID-19 pandemic. Head coach Kaitlyn Wahila said she is looking forward to returning to normalcy.

“We feel like we’re basically just going to be back to normal,” Wahila said. “We’ll be able to compete and play the game we all love.”

During the spring semester, the team took part in its usual spring training — practicing on the field. However, they had to work in smaller pods to follow COVID guidelines. The team competed in two scrimmages last spring, which gave the players an opportunity to work as a team. They won 7-0 against Elmira College and lost 2-0 against William Smith College.

Not having an official first season until sophomore year could be a challenge, but sophomore Kiley Sullivan said she thinks that the limited practices and scrimmages last spring gave her a sense of what to expect this season.

“That time gave us enough of that first year experience as an athlete that we feel prepared as sophomores to fill that role,” Sullivan said.

Losing a season means the roster will look different from the last game, which could impact the early success of the team. However, Wahila said the Bombers have a different perspective on the situation.

“I think the past is in the past and our team is focused on living in the moment,” Wahila said. “We tell [the team] to be where their feet are.”

With the loss of last season, the Bombers have had plenty of time to prepare for Fall 2021. During the remote semester, the team met over Zoom and took part in weekly “virtual game days” where they competed virtually against other teams in the league with competitions like “who can do the most burpees in three minutes.”

Senior backer Victoria Sestito said the team received summer training packets from Vic Brown, the strength and conditioning coach, that lasts from June to the start of preseason. The training typically included five days of conditioning with workouts like short distance sprints and lift days per week.

With the preseason coming to an end, the team is most looking forward to returning to game-action. Sestito said even for returning players, it has been such a long time since any of them have been able to play at the college level in competition.

“Win or lose, we’re all together and I think that’s what matters most in these times,” Sestito said.

From the suspension of competition in March 2020 to now, the Bombers have been preparing for a fall season for much longer than anticipated. Sullivan said she believes this experience will make them stronger.

With such a highly anticipated season, the team’s goals are not centered around success. Wahila said that after coming off of a successful campaign in 2019 and seeing the program change so much in the past year and a half, she just wants the team to enjoy playing.

Sestito’s goal for the team is to be connected and to support each other as reliable teammates on and off the field. Sullivan said she has a personal goal to grow as a player under the coaching staff.

“[The coaches] are fantastic,” Sullivan said. “Being one of their players is something I’m grateful for.”

Preparing themselves for the season, the Bombers need to consider which teams will be their toughest competition. Wahila mentioned the usual suspects like Ithaca College’s rival SUNY Cortland, as well as top contenders from the Liberty League like Skidmore College, University of Rochester and Vassar College. However, Sestito said the team does not care who is next on their schedule.

“I don’t like to think about any team as different from another,” Sestito said. “We show up ready to play no matter who it is… The Liberty League is tough, but we have great skill on our team and a great connection on the field.

The Bombers’ first competition of the season is at 5 p.m. Sept.1 against Utica College at Higgins Stadium in Ithaca.