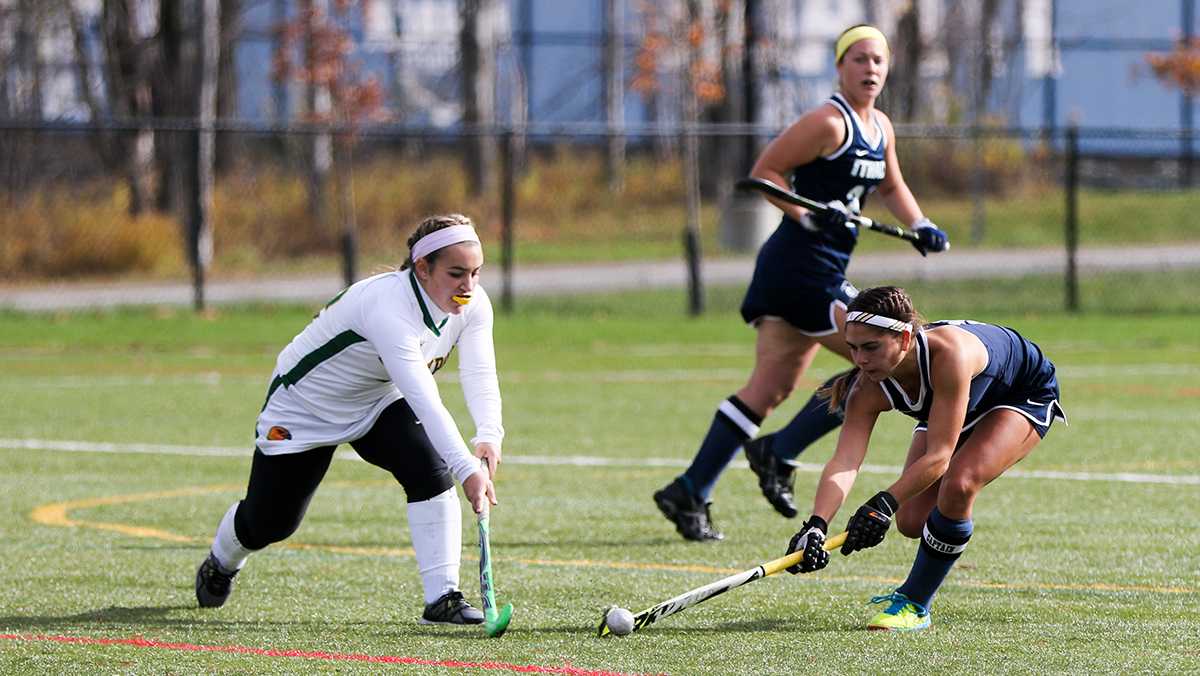 A playoff atmosphere will descend upon Higgins Stadium this weekend as the Bombers will host the Empire 8 field hockey tournament for the first time in the program’s history. The four-team playoff for the title of the Empire 8’s best will take place Nov. 6–7 with the St. John Fisher College Cardinals, the Stevens Institute of Technology Ducks, and the Washington and Jefferson College Presidents. Staff Writer Reed Keller previews all four teams before the tournament kicks off.

The Bombers had their most successful season in recent memory, tearing through a tough conference schedule, in which their only loss came to second-seeded St. John Fisher. The Blue and Gold also handled a challenging out-of-conference slate that featured three nationally ranked programs: William Smith College, University of Rochester and SUNY Cortland. The Bombers went 1–2 against those programs, but all three games were decided by one goal. The team’s strength is its lock-down defense, starting in goal with junior Katie Lass. Lass led the Empire 8 in goals against average with a .751 mark, shutouts with seven , allowed the fewest goals and was second in the conference with a remarkable .862 save percentage. The offense features potent weapons as well. Junior Colleen Keegan-Twombly finished the season with 14 goals, good for second in the conference. Sophomore Michaela Donohue and junior Cassie Schuttrumpf were second and third on the team with 21 and 14 points, respectively. Ithaca returns to the tournament for the first time since 2013. If the Bombers were to win, it would be their first ever Empire 8 tournament victory. They will face Washington and Jefferson in the first round at 3 p.m. Nov. 6. The Bombers bombarded the Presidents, 4–0, back on Sept. 12.

The St. John Fisher Cardinals come in to Ithaca as the second seed thanks to conference losses to Nazareth College and Washington and Jefferson. The Cardinals have been holed up in their nest for quite a while, as their last road game was against Elmira College on Oct. 17. Sophomore Emily Markarian is the catalyst for the Fisher offense. She led the Empire 8 in shot attempts with 107, an average of almost six  per contest, and netted 34 points, good for second in the conference. With Markarian’s breakout year, senior Elizabeth Cusak’s 13 goals and freshman Lauren Fazio’s 10 scores, the Cardinals are the highest scoring team in this tournament and the conference as a whole, with 48 goals on the year. The Cardinals lost in the Empire 8 final to Utica College last year, their second consecutive Finals loss. They will face Stevens in the first round at 6 p.m. Nov. 6. St. John Fisher won 3–1 in its regular season meeting with the Ducks back on Sept. 12.

The Stevens Ducks enter the Empire 8 tournament on a three-game winning streak and sit as the third seed. The Ducks were flying from Sept. 13–27, winning six straight games and holding a 7–2 record. They went into a tailspin, however, after falling to the nationally ranked No. 6 Montclair State Redhawks, finishing their season 5–3. Sophomore Victoria Alvarez led the way for Stevens this season with 11 goals. Her 29 points also led the team. Senior Dailyn Brook and junior Nolie Prouty contributed 26 and 25 points, respectively. Prouty’s 11 assists on the season was a conference best. Stevens lost to Utica in the semi-finals last season. They have captured three E8 titles in 2008, 2009 and 2010.

The final seed in this year’s Empire 8 Tournament is the Washington and Jefferson Presidents. W&J had a difficult start to the season, including a five-game losing skid from Sept. 23 to Oct. 10, dropping them to 4–7. Then came a complete turnaround as the Presidents won their last seven contests by a combined score of 31–3 with five shutouts over that span. Junior Amanda Steffey led W&J in goals with 13 and assists with seven. Steffey’s team-leading 33 points is almost double that of Allison Morrissey, the second leading scorer on the team. W&J lost in the semi-finals to St. John Fisher last season. They have appeared in five Empire 8 finals, with their lone win coming in 2011.