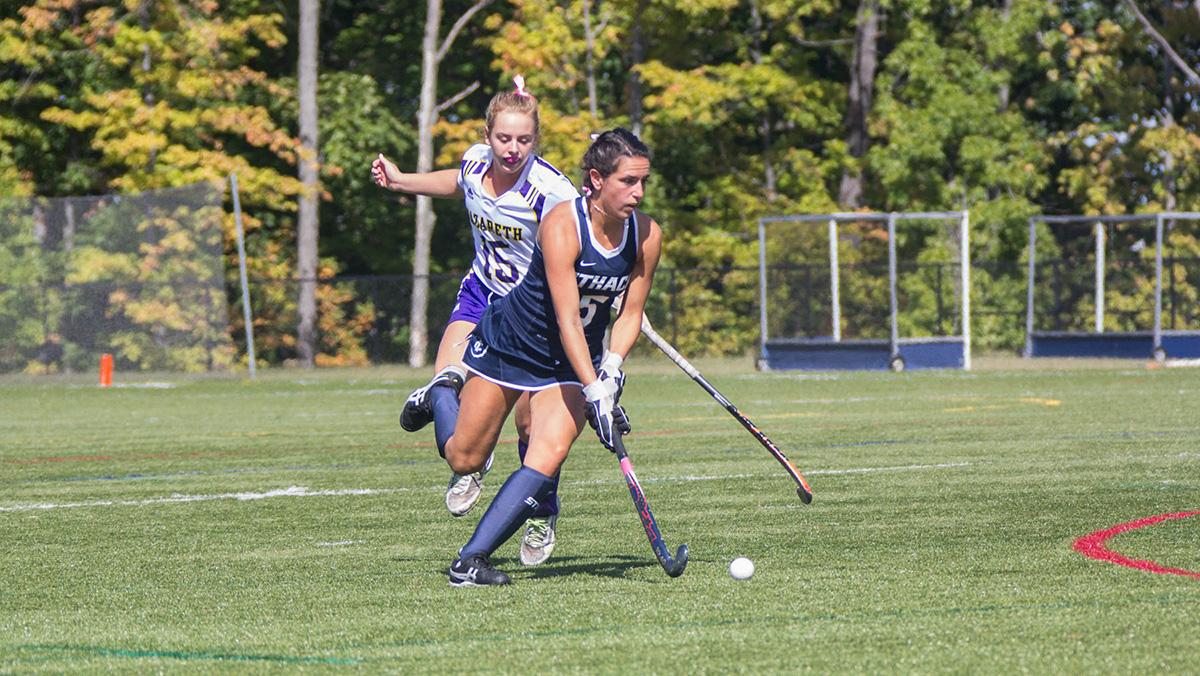 CAITIE IHRIG/THE ITHACAN
Junior Amanda Schell gets past a defender in the Bombers game against Nazareth College on Sept. 24 at Higgins Stadium. The Bombers defeated the Golden Flyers 7–0.
By Reed Keller — Staff Writer
Published: September 24, 2016

After shutting down Houghton College Sept. 21, the Bombers dominated Nazareth College 7–0 to earn a second-straight victory Sept. 24. With the win, the Bombers are back above .500 with a 4–3 record.

On South Hill, the Bombers came out firing, something they had struggled to do so far this season. The South Hill squad recorded the first five shots of the game before any goals were scored, barely allowing Nazareth to handle the ball. The Golden Flyers sophomore goalkeeper Kimber Nourse did all she could to weather the storm, but eventually the Bombers broke through in a big way.

With nine minutes gone in the first half, senior Lauren Delia was awarded the third penalty corner of the day for the Bombers. Delia started the action and fired the ball to the stick of fellow senior Cassie Schuttrumpf, who lobbed a shot up and over Nourse for the first goal of the day.

At about the halfway mark of the first half, the Bombers struck again. As Schuttrumpf directed her fourth shot of the day on net, the rebound bounced out and found senior Colleen Keegan-Twombly who scored the second Bomber goal of the day. That tally marked Keegan-Twombly’s fifth goal of the season.

Despite the two goal lead in the game, the Bombers’ offense was not done yet. Over the last five minutes of the opening half, the South Hill squad would tack on three more goals, one each from Schuttrumpf, Keegan-Twombly and Delia, increasing the lead to 5–0 at the break.

Delia would pick up her second goal of the game six minutes into the second half. After putting the ball in play after a penalty corner, Delia ran a give and go with sophomore Emily Vallee and fired home her sixth goal of the year for the sixth goal of the day. About five minutes later, sophomore Maria McGloin would cap the scoring with her first goal of the season, making it 7–0 Bombers.

The Bombers out-shot Nazareth 32–5 and 25–1 in shots on goal. After allowing 10 goals in their first five games, the Bombers have scored 10 and allowed none over their last two contests.

The Bombers look to continue their winning ways at 3:30 p.m. Sept. 27 when they travel to Aurora, New York for an out of conference matchup against Wells College.

The field hockey team lost in the final minute of its game against the Stevens Institute of Technology Ducks Sept. 17.

Field hockey falls in last minute of game against Stevens