Field hockey team sticks around for Empire 8 playoffs this year 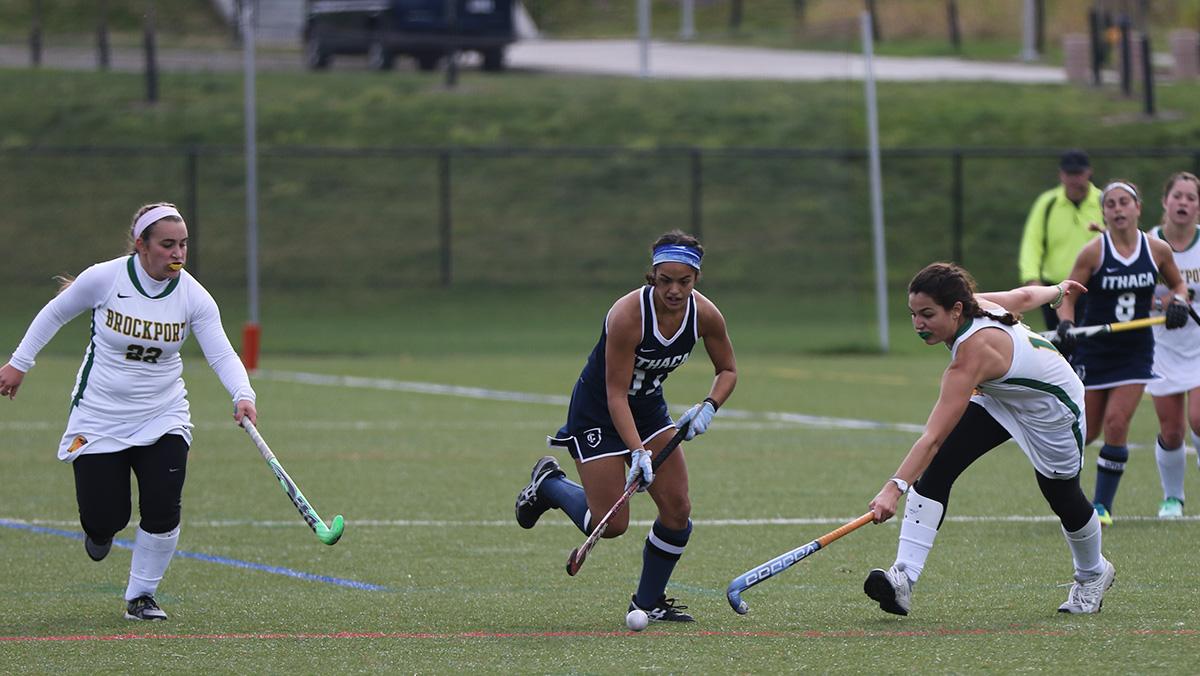 The Ithaca College field hockey team has had one of its most successful seasons in recent memory. The squad currently sits atop the conference with an overall record of 12–4 and holds the top seed by virtue of the Bombers’ 2–1 win over Utica College on Oct. 24. For the first time in the program’s history, the Bombers will be hosting the Empire 8 playoffs on Nov. 6 and 7. The squad will take on Washington & Jefferson College at 3 p.m. Nov. 6 in the first round of the tournament, while St. John Fisher College will square off against Stevens Institute of Technology at 6 p.m.

The last time the Bombers were in the tournament was 2013, when they lost 1–0 to Utica in the semifinals. The Blue and Gold haven’t won an Empire 8 crown since they split the title in 2006, ironically, with Utica.

Longtime head coach Tracey Houk said she expects big things from the team’s return to postseason play for the first time since 2013.

“It’s big for the returning players,” Houk said. “They were here when we had some tough times, and now their hard work is paying off.”

The squad has faced some tough competition throughout the year but only has one loss in the Empire 8, which came to second place St. John Fisher College on Sept. 19. The Blue and Gold’s other defeats have come at the hands of No. 5, nationally ranked, William Smith College, No. 19 rival SUNY Cortland and unranked SUNY Geneseo.

Houk said the Bombers have been working on both offense and defense, but she has really been impressed with the dominant defense and stellar goaltending her team has displayed. The Bombers have allowed only 12 goals during the season, and this has catapulted them to the top of the leader board in the Empire 8, which is something the team takes pride in, Houk said.

“When there’s a save or we force a turnover, it really demoralizes the other team,” she said. “Great defense prevents the opponent from getting anything going offensively, and that allows us to create more chances for ourselves.”

Nowhere is that more proven than in the goals department. The Bombers are averaging just over 2 1/2 goals per game. They have only allowed more than one goal three times on the season, holding their opponents to an average of .75 goals scored per game. Junior forward Colleen Keegan-Twombly leads the team with 14 goals and three assists, which are good for 31 points, also a team high.

Katie Lass, the third-year starting goaltender who has posted a career-high seven shutouts this season, agreed with Houk. Lass currently has 75 saves on the year — a season-high 10 in the matchup against William Smith — and has played 1,118 minutes in the net for the Bombers, starting every contest.

“The team is working well together,” Lass said. “We’re making sure we all see the ball … We trust each other, and we all have the same goal: We want to win.”

Houk also commended the leadership her team has displayed throughout the year, not only from the three senior captains — Olivia Salindong, Caitlin O’Brien and Laurel Shnider — but from the squad as a whole.

“Olivia is so skilled and embodies the three C’s — calm, cool and collected,” Houk said. “Caitlin brings serious intensity and a rocket of a shot. Laurel is the unsung hero of the team. She consistently draws the other team’s fastest forward and has done well with those assignments all year.”

Even though the seniors are the captains of the team, Houk said leadership is not a quality specifically reserved for those three. She said the team has found leadership in its sophomores and juniors as well, and the support the teammates have for one another has elevated the squad’s success.

The Bombers were 7–3 at home this season, which was their highest win total since 2008, when they were 7–1. The success on their home turf leads Lass to believe that hosting the tournament will give the Bombers an edge over the competition.

“I think that it’s definitely going to bring about more excitement for us,” Lass said. “It’s going to give us an edge. It’s nice not having to travel.”

O’Brien pointed out that the Bombers’ 3–2 win against conference foe Stevens Institute of Technology on Oct. 11 was also a win that catapulted them to the top spot. Trailing 1–0 at halftime, the Bombers scored three second–half goals in a frenzied comeback. They would go on to win three of their last four games and clinch the top seed in the Empire 8 after that game.

“We played a really good game in that one,” O’Brien said. “It showed us that we can come back and we’re never out of the game.”

With the Empire 8 Tournament looming, Shnider, Salindong and O’Brien all said they feel confident heading into this weekend. Salindong said she is not worried about who they will play host to.

“All of the teams are a pretty good match for us,” Salindong said. “We did pretty well against conference teams this year, so anyone will be a good opponent.”

O’Brien said the win against Stevens was huge for the Bombers in keeping their momentum going and proved that the Blue and Gold could beat a dominant opponent, which they hope to do in the playoffs.

“When we beat Stevens earlier in the year, that was big for us,” O’Brien said. “That was a really big game, and it shows that we can hang with anyone in this conference.”