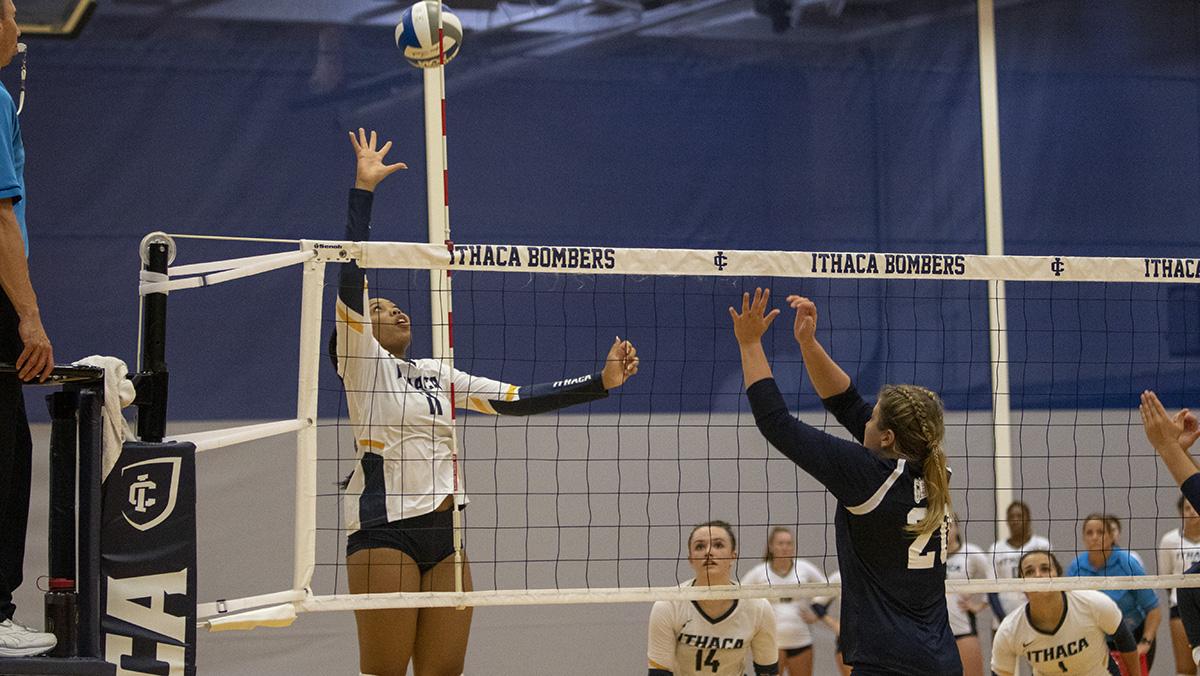 With a stacked schedule, including four nationally ranked teams within their first three multi-header tournaments, the Ithaca College volleyball team is ensuring that its young roster can handle the pressures of late season Liberty League play.

With two weeks of in-season competition under their belts, first-year student athletes Maddie Cox and Leila Chipepo have been able to make a lasting impression on the court. The pair has started nearly every match since their season opener against Swarthmore College on Sept. 2, and have since established themselves as leading contributors in both kills and assists.

Head coach Johan Dulfer said that he expects his first-year athletes to compete with the same level of energy as his upperclassmen and that the Class of 2026 has been doing exactly that.

“To have two or three contributing members from each class is a healthy expectation for a healthy program that’s continuing to grow,” Dulfer said. “The competition is what fuels our game.”

Cox, a setter, has been averaging 30 assists per game while Chipepo, an opposite hitter, has averaged nine kills per game. The offensive duo appears to mesh seamlessly with their veteran teammates.

Typically, fall sports have a much shorter window for preseason practice than sports taking place in the winter or spring. The team had only been together for three weeks prior to their season opener at Ben Light Gymnasium on Sept. 2. In an extremely chemistry-oriented sport, team bonding is essential to integrating new players before the first games begin.

Despite the brevity, Cox said that by being with her teammates often during such a short time frame, it feels like she has known her new teammates forever.

“You’re with each other every day, every lift, every practice, every meal,” Cox said. “I don’t think I’ve ever connected with a group of people so quickly before.”

However, in typical athlete fashion, the pair said that there will always be room to grow. The more time the team spends together as the season progresses, the closer they will become.

“Of course, the more we practice, the more we’ll improve,” Chipepo said. “But, for so early in the season, I feel like we’re in a really good spot right now.”

Senior middle hitter and captain Jennifer Pitts said preseason scrimmaging and team building events have been essential in terms of integrating first-year players into the team.

“Scrimmages have been a great opportunity for the new girls to get some game-like experience under their belts,” Pitts said. “We’ve made the best of the time we have and it’s really seemed to be working out for us so far.”

In addition to their time in the gym, Pitts said spending time together outside of practice has provided the first-year athletes an opportunity to get to know each other through some wholesome fun.

“We went to our coach’s lake house before school started and spent a day of bonding there, so the time we spend together really adds up,” Pitts said.

Although her team has been occupied between practice, games and spending quality time together, Pitts recognized that, for the first-year students, playing in a new environment so far from home can be a big adjustment.

“I think that [Cox] and [Chipepo] have been adapting really, really well,” Pitts said. “As a team, we always have people to lean on and shoulders to cry on, but they’ve been doing great.”

Cox, who is from Apex, North Carolina, said her decision to make the trip upstate is one she is grateful for.

“I genuinely can’t say why I decided to move 12 hours from my home, but it’s definitely been an experience and it’s a choice that I’m glad I made,” Cox said. “I guess I just kind of wanted to experience something new. There was a lot about the opportunity that was really intriguing to me.”

Similarly, Chipepo, who is from Peoria, Arizona, said that during her recruitment process, she was willing to go anywhere if it meant she could continue to play the game she loved.

“I get asked a lot why I decided to move so far, but I just really, really wanted to play volleyball in college, you know?” Chipepo said. “It’s definitely a totally different environment that I’m still getting used to, but I’m really enjoying it and I’m liking the level of play that I’m getting out of it.”

The program has had players residing from all over the country, ranging from Florida to Washington to even Hilo, Hawaii. Dulfer explained that this geographical diversity is essential when it comes to being able to compete at the national level.

“Our team is full of players who understand what it’s like to be far away from home, so the support system for each other kind of sustains itself,” Dulfer said.

As the season progresses and more in-conference competition approaches, Cox and Chipepo said they have been reflecting on the beginning of their first year in Bomber threads and what they aim to do with the remainder of their time on the court this season.

“My position is easy when I’m surrounded by such amazing passers and hitters, like [Chipepo],” Cox said. “I just really hope to be able to come into my own on the court this season and get comfortable in those high pressure situations that I know we’re going to continue to face as a team.”

Similarly, Chipepo said her position grants her an amazing opportunity to continue learning and growing as a contributing player.

“I’m really looking forward to those big tournaments and exciting games, but I just really want to try my best and help out my team as much as I can,” Chipepo said. “I want to play a part in achieving what they couldn’t last year.”