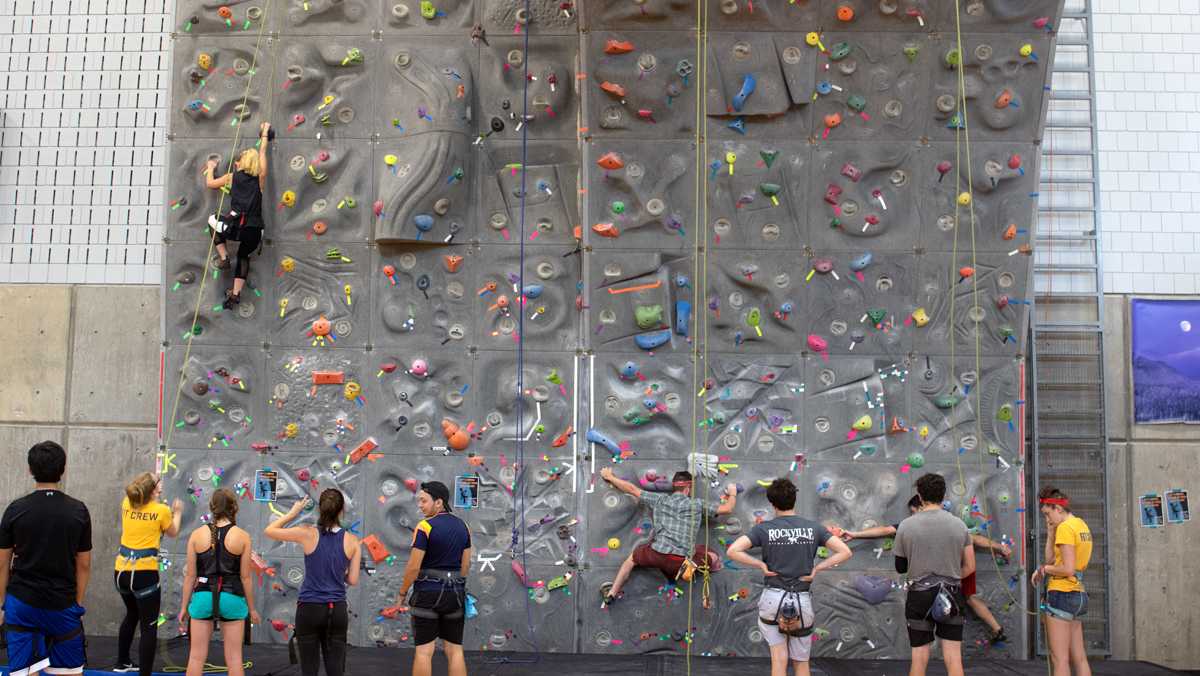 Students at Ithaca College have always been able to challenge themselves by climbing the multicolored rocks at the Fitness Center rock wall. Now, students can enjoy the same experience in a much safer way.

The Fitness Center got new equipment installed to the rock climbing wall Aug. 21–23 to get prepared for the new school year. One of the ways the wall has improved is with the installation of auto belays. An auto belay is a device that controls the slack as a climber moves up and down the wall. Sean Reilley, program coordinator for recreational sports, said the Fitness Center installed two auto belays along with four belay bars to ensure climbers have more room when climbing.

“It will really enhance the safety of everyone who uses the wall,” Reilley said. “Also, it opens up some doors for higher volume during open rec hours and a better opportunity to do some teaching, and there will definitely be more educational applications the faculty members can elaborate on.”

Reilley said the idea to install the auto belays on the wall came up in the early part of summer. The fitness center had the wall inspected to make sure it was safe to work and build on.

The Fitness Center coordinated much of the project with the Department of Recreation and Leisure Studies. Chris Klinger, assistant professor in the recreation and leisure studies department, said the request to expand the wall came from the department. He said the rock climbing wall is used in many different classes, such as Rock Climbing and Fundamentals of Leadership, which is why the department wanted to expand it.

Klinger said providing students with an opportunity to climb the rock wall gives them experience early on for the classes.

“If we are going to talk about adventure and what adventure does for people, like the psychology and philosophy behind it, we are going to give some adventure,” Klinger said. “We use the rock climbing wall a lot for teaching our classes and doing team and leadership development.”

Sophomore Bryan Robles, who frequently climbs the wall, said he is looking forward to using the new features.

“I feel that this would make the wall feel more natural since, in the outdoors, you can go any way you want instead of just going straight up,” Robles said. “I’m really excited to try this out, and I hope others are just as excited.”

“Depending on how interest goes and as our staff and climbers get used to the auto belays, we may look to expand the hours because we won’t need to have quite as many people on hand to have that same safe environment,” Reilley said.

Robles said that with the new expansion, he hopes it will draw a larger crowd of students to the climbing wall.

“I’ve always felt safe at the hands of the workers there,” Robles said. “But it does make me more excited to see more faces at the wall if people start seeing that the wall is safer to climb.”