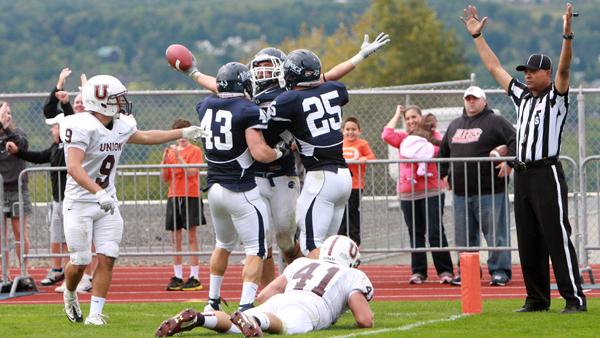 A dramatic fourth-quarter rally by the football team stunned the Union College Dutchmen and helped the Bombers improve to 2–0 overall with a 27-24 overtime victory Saturday in front of a sold-out crowd of students and alumni at Butterfield Stadium.

The Dutchmen seemed to put the game out of reach with a 19-play, 99-yard drive that lasted more than nine minutes. The drive was finished off by a one-yard touchdown run by sophomore running back Darnel Thomas to make it 21-7 with 6:30 left in the fourth quarter.

“First thing was to get the first score, so we picked up the tempo,” Neumann said. “We were down and we didn’t have much time, so we had to go to the air.”

Neumann first connected with senior fullback Mike Moon in the flat for a six-yard touchdown to cut the Dutchmen lead to 21-14 with 2:49 left. The South Hill squad chose to kick it deep to Union, and after a three and out, Dutchmen junior long snapper Kenny Schuck sailed the ball over freshman punter Daniel Elstein’s head, forcing him to cover the ball up at his own four yard line.

Junior linebacker Brian Hardenburg said he was ecstatic after the game-changing play.

“I was on punt return and saw it go over his head,” Hardenburg said. “My first thought was, ‘Someone get it. Someone go get the ball.’”

Hardenburg recorded a career-high 12 tackles. He also set a team record with six tackles for losses in only his second varsity start. His performance earned the praise of Bombers’ Head Coach Mike Welch, who said he admired Hardenburg’s heart.

After the botched snap, Neumann connected with junior tight end Steve DelMoro on a four yard pass to tie the game at 21 with 1:39 remaining left to force overtime.

Senior running back Clay Ardoin said the team knew they would win in overtime, despite the fact that the Bombers had lost their last four overtime games.

After the Bombers defense held the Dutchmen to a field goal, the offense drove to the Dutchmen five-yard line. After a timeout, Neumann took a step back and threw a high-arching fade to the back corner of the end zone to senior wide receiver Joe Ingrao. Ingrao caught it to give the Bombers the most remarkable of wins.

Head Coach Mike Welch said the win will motivate the team to keep improving before its first conference game at Frostburg State at 1 p.m. next Saturday.

“It feels good to win a tight game like this,” Welch said. “It’s something we can build on, and we can play better, but it’s nice to do that after a win.”