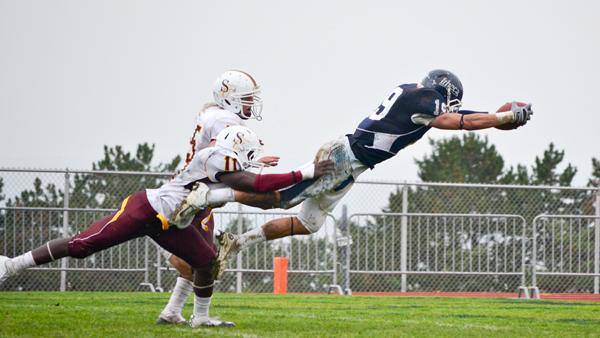 In a muddy Butterfield Stadium, the football team surprised Division III pundits with a 21-14 upset of 7th-ranked Salisbury University on Saturday afternoon.

Neumann was 20-for-30 passing for 215 yards and two touchdowns. He said the pass to Ingrao was a result of the Bombers having prior successes with their play calling.

“It was about finding the right thing at the right time,” Neumann said. “We had been running the corner routes, and so Joe faked the corner and went to the post, and I hit him for that long one.”

The touchdown pass came after the Sea Gulls drove 63 yards in 2:29 to tie the game, when senior quarterback Dan Griffin passed to sophomore slot receiver Isaiah Taylor for a seven-yard touchdown pass with 1:41 left in the fourth quarter. While the Sea Gulls did rush for 185 yards, their triple option attack was held in check throughout the game. Senior linebacker Zach Matuszak said the Sea Gulls’ rushing was limited because of interim Head Coach Mark McDonough’s preparation.

“Coach Mac is a good scout, and he had the scout team running basically every look we saw today, so that was awesome,” Matuszak said. “We knew what was coming before we even got to the game today.”

Junior safety Tom Scanlon recorded nine tackles, trailing only his classmate safety Skylar Griffenberg, who recorded 14 tackles. Griffenberg started in place of senior Josh Liemer, who did not dress and was in a walking boot on the sideline. Scanlon said the defense’s performance reaffirmed their confidence.

“We knew all along we had a strong defense,” Scanlon said. “A couple of games we got gashed, but we knew as a defense that we were strong, and the triple option is a little different. But we were happy to get out of here with a W.”

McDonough said the win was vital after losing to St. John Fisher College last week. He said the Bombers are now beginning to win the tight games.

“I talked about it this week, that’s how the Empire 8 is this year, any team can show up and beat anybody,” McDonough said. “We’ve been close the last couple of weeks and this week finally put it together.”

“I think Ithaca still has a shot at the playoffs, that’s all I got to say.”

Those were Matuszak’s thoughts on the impact of Saturday’s win. The Bombers are eliminated from Empire 8 consideration, but a win against the 7th-ranked Sea Gulls will boost the Bombers’ resume for a potential Eastern Collegiate Athletic Conference bowl bid. The Bombers have to win out to be realistically considered.

Senior linebacker Dan Cimino injured his right knee in the first quarter and was in crutches after the game. When asked about Cimino’s status, McDonough did not provide specifics but said the injury “doesn’t look good.” Junior linebackers Josh Duggan, Brandon Cheeseman and Johnny Gorton-Parker will all be relied on to fill in.

While the Bombers deserved the win, they received a lot of help from the Sea Gulls, who committed eight penalties. In the first quarter, the Sea Gulls committed an unsportsmanlike conduct penalty to pin sophomore punter Kyle Hamby deep in his own end. Junior Sam Carney returned his punt 60 yards to the Sea Gulls’ 2-yard line. The Bombers failed to score on three tries but were bailed out when a roughing-the-kicker call on their field goal try gave the Bombers a new set of downs. On the next play, Neumann found junior tight end Jared Prugar for the 3-yard touchdown.

Since their loss to the Bombers on Sept. 29, Utica College has won four straight games. The Pioneers defeated Alfred, 31-7, at home to head into a tie for first place in the Empire 8. Senior quarterback Andrew Benkwitt threw for 364 yards and three touchdowns passing the 10,000-yard landmark in the process for the Pioneers (6–2 overall, 4–1 Empire 8). The Saxons (4–3 overall, 3–2 Empire 8) are effectively eliminated from conference contention. The Pioneers travel to Salisbury knowing that the winner will be on the doorstep of the Empire 8 title.