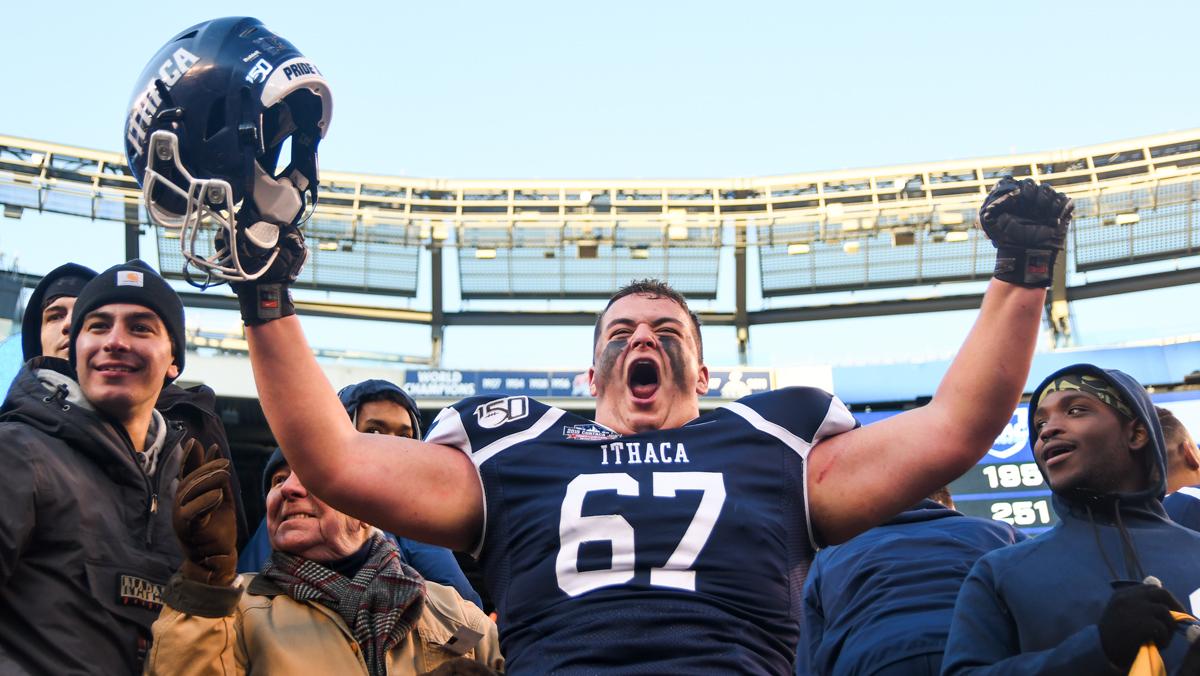 When the Ithaca College football team lined up for kickoff at the 61st Cortaca Jug game, it was not on the typical torn-up grass of Butterfield Stadium. Instead, the players ran onto the field at MetLife Stadium in East Rutherford, New Jersey, and were greeted by 45,161 fans — which broke the attendance record for a Division III football game.

The Bombers took home their third consecutive victory in the rivalry matchup against SUNY Cortland, defeating the Red Dragons 32–20. Players from the South Hill squad danced in front of the media cameras following the victory, holding up three fingers and chanting “three-peat.”

It was a sunny, cloudless day in East Rutherford, and despite the chilly 41-degree temperature, supporters of all ages decked out in red or blue packed into the lower tiers of the NFL stadium to cheer on their favorite team. The stadium roared with every touchdown, with cheers and boos from the opposing side as Jumbotrons showed the celebrations on and off of the field.

“We got the Division I–feel type game, and to go out this way, I can’t even put into words,” senior linebacker Nick Garone said at the postgame press conference.

Fans began arriving early in the morning to tailgate in the parking lots before the game began. Students and alumni partied together between parking spots, and as more and more fans arrived, old friends excitedly embraced as they were reunited. A group of women from the Class of 1997 said they met up all together for the first time in 22 years.

“We were so excited to see each other,” Amy Miller ’97 said. “It’s a great venue, and it’s something we could look forward to and all feel apart of. We wanted to revert back to our IC days.”

Lisa Schneider ’89 planned for over a year to attend the game with her college roommate.

“We hadn’t talked in a long time, and this brought us back together,” Schneider said. “When we were at Ithaca College, we were at every [football] game. For the ’88 Stagg Bowl, we even drove to Alabama.”

The Class of 2017 hosted a tailgate sponsored by Moonies Bar and Nightclub, a popular drinking spot for current students. Chris Washburn, who is known in the Ithaca community as DJ Washburn, provided the music for the event under a yellow flag with “2017” spray-painted on it.

Former football players were able to relive their glory days at the college through the unique Cortaca experience. Patrick Moynihan ’90 and Todd Oakley ’90 were both members of the 1988 football team that won the NCAA championship. Both said they had not been to a Cortaca since they graduated from the college.

“It’s the tradition of the game,” Oakley said. “When we played them [at the Cortaca Jug game] in ’88, we lost by a point, and we went on to win the national championship. Cortland and Ithaca is just a strong tradition, and that’s what brought me back.”

Current and former Bombers continued their celebrations inside the stadium when the Bombers brought the Jug back to South Hill for the third year in a row.

Senior quarterback Joe Germinerio had one of his best games of the season, rushing for 163 yards — his highest total this season — and throwing for 251 yards. Head coach Dan Swanstrom said the game plan relied heavily on Germinerio to execute.

“I knew we were going to ask a lot of Joe today,” he said. “He’s such a hard worker, and he wills himself to be a great quarterback. He’s got amazing dedication, … and for him to go out and do it the way he did it with 34 carries and 27 passes, it says a lot about how he was able to stay in the game … and play really great football.”

Germinerio said in September that he plans to leave the college at the conclusion of the fall semester, as his eligibility will run out after the current football season ends. Germinerio graduated in 2019 from The College at Brockport, but he said he transferred to the college because he had a season of eligibility remaining after he redshirted his freshman season at the University at Albany.

The Bombers maintained control in the first half, possessing the ball for 21:33 of the possible 30-minute half. They scored on their first possession of the game with an 80-yard drive. Germinerio rushed in for a 1-yard touchdown, and freshman kicker Nick Bahamonde completed on the extra point to give the Bombrers a 7–0 lead with just under nine minutes remaining in the first quarter.

Cortland was able to secure two first downs on its first drive, but senior quarterback Brett Segala fumbled the snap, and it was recovered by the Bombers’ senior defensive end John Hadac on the 40-yard line. However, the South Hill squad was plagued by penalties after the recovery and was pushed back as far as the 49-yard line. After Germinerio made an 11-yard rush on third and 27, Bahamonde took a 48-yard field goal attempt on fourth down, but he came up short for the first time all season when the kick missed wide right.

The first quarter ended after Cortland tacked Germinerio on a rush for no yards. Sophomore punter Brian Fallon punted for 25 yards, and the Red Dragons took over on the 43-yard line. Senior running back Zach Tripodi carried the ball six yards for the touchdown, but the Bombers blocked the extra point to maintain a 7–6 lead with 10:18 remaining in the half.

The Bombers’ next scoring play came with approximately two minutes left in the first half. Germinerio rushed the ball in from the 1-yard line for his second touchdown of the day, but Bahamonde missed the extra point, making the score 13–6.

Cortland wide receiver Cole Burgess fumbled on the following drive, and the ball was recovered by junior cornerback Khiry Brown on the 30-yard line and returned to the 46. The Bombers drove downfield and Germinerio notched his third touchdown of the day on a 10-yard rush. Bahamonde’s extra point attempt was blocked for his second failed attempt of the day.

Bomber fans said they were optimistic after the first half. Freshman Tristan Read said he hoped the squad could improve on kicking and rush defense.

“We were a little rough on special teams,” Read said. “We played pretty well, though. I’m too cold for really good analysis.”

David DeCamp ’16 said he was most excited about the record-breaking attendance at the game.

“I used to play for Ithaca on the football team,” DeCamp said. “It’s been surreal because I think every Ithaca student, no matter if it’s your first–year or you’re an alumni coming back from 10 years ago, you’ve dreamed of this stage.”

The Bombers were able to keep the Red Dragons from doing much in their first drive of the second half, holding them to a three-and-out. The Bombers immediately stormed up the field and got the ball within striking distance. On fourth-and-one, the Bombers took a risk, and instead of rushing the ball or kicking a field goal, Germinerio lined up in the shotgun formation and hit senior wide receiver Will Gladney for a touchdown. Bahamonde made the extra point, and the Bombers extended their lead to 26–6.

Play slowed down for both squads in the middle of the third quarter, with neither able to get within field goal range. Germinerio took his first sack with just over two and a half minutes left in the quarter. Fallon sent a stellar 52-yard punt to the 12-yard line following the sack.

Segala broke through at the end of the third quarter after he completed an 80-yard pass to junior wide receiver Jason Carlock. Tripodi rushed the ball a yard into the endzone shortly after to cut the Bombers’ lead to 26–13 after the extra point was completed.

The Bombers struggled on their next drive, and a holding penalty put the squad at first and 30 from their own 6-yard line. The third quarter ended with the South Hill squad facing a third and 24 at the start of the fourth. However, Germinerio immediately hit sophomore wide receiver Jacob Cooney for a 35-yard gain and a first down. The Bombers could not get into the endzone and took a field goal attempt, which Bahamonde missed. The drive left the Red Dragons with just over eight minutes to shrink the South Hill squad’s lead.

The Red Dragons had a strong next drive after Segala completed a 24-yard pass to Burgess. The drive finished with a 3-yard rushing touchdown from Tripodi. After the extra point, the score was 26–20 in favor of the South Hill squad.

The Bombers were able to move the ball upfield on their next drive but were faced with a third and six from Cortland’s 46-yard line, Germinerio hit junior wide receiver Andrew Vito with a pass that put the South Hill squad up by 12 with just over three minutes remaining. The 2-point conversion that followed was no good.

Senior wide receiver Will Gladney said Vito’s touchdown was the highlight of the game for him.

“Vito works so hard,” Gladney said. “From day one when he came in, we would stay after practice until we couldn’t see the football. On this stage, it was awesome to see him score that touchdown.”

The Red Dragons responded by driving into Bomber territory, but a pass from Segala was intercepted by sophomore cornerback Anthony Robinson, giving the Bombers possession with only 1:29 left. After the play, a small fight broke out. Cortland senior Russell Howard, an offensive lineman, received an unsportsmanlike conduct penalty for making contact with an official and was subsequently disqualified from the game.

The Bombers took a knee with the ball from there, and secured the 32–20 victory. The squad dominated in possession, holding the ball for 44:26 of the game. The Red Dragons ended with only 15:34 of possession time.

Despite the loss, Cortland head coach Dan MacNeill and senior running back Zach Tripodi, a team captain, came into the postgame press conference with smiles on their faces. MacNeill gave credit to the Bombers’ offense for its performance against the Cortland defensive system.

“We knew the dangers when you play two deep safeties the entire game that you’re going to open up some run game,” MacNeill said. “We thought that was the best–case scenario to take away their strength and then work from the back. I thought that was a good adjustment by them.”

Swanstrom said the biggest challenge for the South Hill squad was overcoming the back-to-back losses of the last two weeks against Union College 31–21 and Rensselaer Polytechnic Institute 38–12. The losses eliminated the Bombers’ hopes of making the NCAA tournament.

“I feel a lot of happiness for our guys,” Swanstrom said. “We’ve had a very trying couple of weeks, and this team was emotionally exhausted. I know what they were trying to do this year, and it was really hard to keep the focus in front of us in what we were trying to do and trying to accomplish.”

Thanks to the win, the South Hill squad earned a spot in the Asa S. Bushnell Bowl, which will be played Nov. 23 at Butterfield Stadium.

Fans came from across the country to experience the historic Cortaca game from both the Cortland and Ithaca College camps. Rich Steiner ’91, along with his wife, son and daughter, flew to East Rutherford from Fort Lauderdale, Florida. Steiner said it was his first Cortaca game since he graduated.

Steiner’s 7-year-old daughter Eva said she did not know if she would be a Bomber in the future because of how cold it was at the game compared to the Florida climate she is used to.

Freshman Jeremy Goldstein said the experience was especially exciting for him as a fan of the New York Giants, whose home stadium is MetLife.

“I love coming here for Giants games, but coming here to see Ithaca is a whole new experience, and I love it,” Goldstein said.