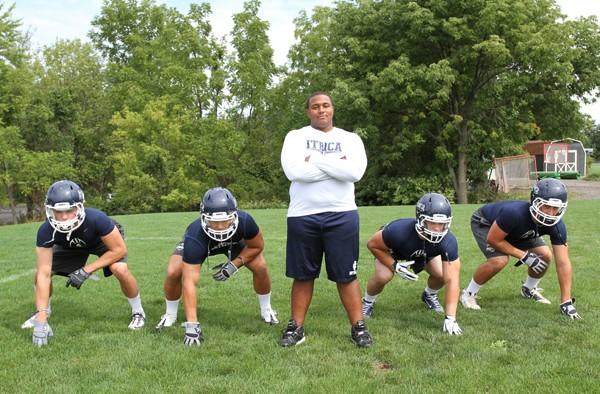 Senior center Nathaniel Hemingway owes the start of his collegiate football career to chance. However, he refuses to let chance dictate the fate of his career even after a near-fatal car accident.

Hemingway severely dislocated his foot when his car collided with a tractor last December. The offensive captain, however, was able to return to the field in time to start for the Bombers in their season opener against Moravian College.

Hemingway’s journey back to the collegiate field was as complicated as his trip to it. After a career that included a Public Schools Athletic League championship with Curtis High School in Staten Island, N.Y., Hemingway didn’t receive any offers from colleges to play football because he only played on offense and colleges covet players with positional versitility.

The lack of interest Hemingway received, coupled with the interest in his cousin, former SUNY-Cortland defensive back Kyle Nisbett, and Hemingway’s high school teammate, Dominique Easley of the University of Florida Gators, motivated him to search for a Division III college in the region.

After contacting Head Coach Mike Welch through emails, Hemingway was allowed to join the football team. He said he was unaware that he was joining one of the most prestigious programs in Division III until he received a preseason email that Welch sent to the team.

“It said in the letter that we were ranked 10th in the country, and I was like, ‘Whoa, what did I get myself into?’” Hemingway said. “I had no idea what kind of prestige that was here at Ithaca.”

Hemingway broke into the starting lineup in his sophomore year and started in every game during the past two seasons. Last fall, after a meeting with the returning members of the team, Hemingway began his five-hour drive from Ithaca to his home on Staten Island. As he drove along Route 13, a farm tractor approached on the other side and made a left turn in front of Hemingway, leaving him with nowhere else to go. His car collided with the tractor’s tire, totaling it.

Hemingway was rushed to Binghamton Hospital where doctors spent four hours relocating all five metatarsals in his foot. His football career was cast into doubt.

Junior offensive tackle Dan Fischer said he was stunned when his line mate Hemingway texted him the news.

“I was shocked, but more worried because he said he crushed his foot, and I was worried over if he was even going to come back and play,” Fischer said.

Hemingway said the same doubts entered his head after the accident.

“I had to come to the conclusion that there was a possibility that I wasn’t going to be able to play football,” Hemingway said.

As he pondered the future of his athletic career, Hemingway said he came to terms quickly and considered other ways he could lead his team.

“I was in a peace of mind that if I can’t play I’ll end up being on the sideline coaching and trying to lead in ways that I haven’t been challenged to do so to this point,” Hemingway said. “I was prepared for not being able to play.”

While Hemingway was awaiting a verdict on his football career, his teammates elected him as the offensive captain for the 2012 season. When it was announced at the team’s annual banquet, he said he reflected on his humble beginnings with the Bombers.

“I wasn’t recruited to come here, and I just worked hard to be the player that I am,” Hemingway said. “It’s an honor that my teammates look up to me in that height and chose me to lead them on the offensive side of the ball and as a team.”

Hemingway’s first role as captain would be to lead the team in its off-season workouts and spring practices. During this time, he spent 21 out of 24 hours with his foot elevated, which required him to use a scooter and hop on one foot to get around his house. Despite the poor mobility, Hemingway never missed a workout or a practice. Fischer said the time Hemingway spent on the sideline made him a better leader.

“He helped the freshmen learn the offense and had a hands-on approach,” Fischer said. “He wasn’t yelling or talking loudly, but telling the young guys, ‘Hey, if you got a question find me, and I’ll explain it because I want you to know this before we go into the season.’”

First-year offensive coordinator Ryan Heasley noticed Hemingway’s presence on the sidelines almost as soon as he arrived for his first day on the job in March. He said Hemingway’s selflessness makes him an ideal captain.

“He was elected captain for a reason,” Heasley said. “When I arrived here on that Monday in late March, I recognized his devotion and his love for his teammates and his willingness to go out of his way to help the younger guys by being able to use his knowledge to bring them along.”

After the spring semester ended, Hemingway had another surgery on his foot, which required the use of a walking boot until early July. A few weeks after the boot was removed, Hemingway was told to jog on a treadmill. His first strides were pain-free. The next session — two days later — the speed was increased and there was still no pain. As July turned to August, and as Hemingway was told to run instead of jog, there was no pain, only a limp.

In late August, eight months after nearly losing his foot, Hemingway was suiting up for football camp. He was cleared for game action in the week leading up to the Bombers’ season opener Sept. 1 against Moravian College.

“There’s been other kids battling with serious injuries,” Joyce said. “And they look at Nate and how far he’s come and know that there’s hope, and if you keep working hard you’ll be back with the rest of the team.”

In the end, Hemingway said it was his love of the game that motivated him to get back on the field.

“I’ve been playing football since I was six years old, and I love it more than anything except my family,” Hemingway said. “I love the smell of clean-cut grass, and I love the national anthem right before the game, and I love seeing my teammates happy when we make a big play. I know that this year will be my final year playing football, so I’m just going to give it my all.”