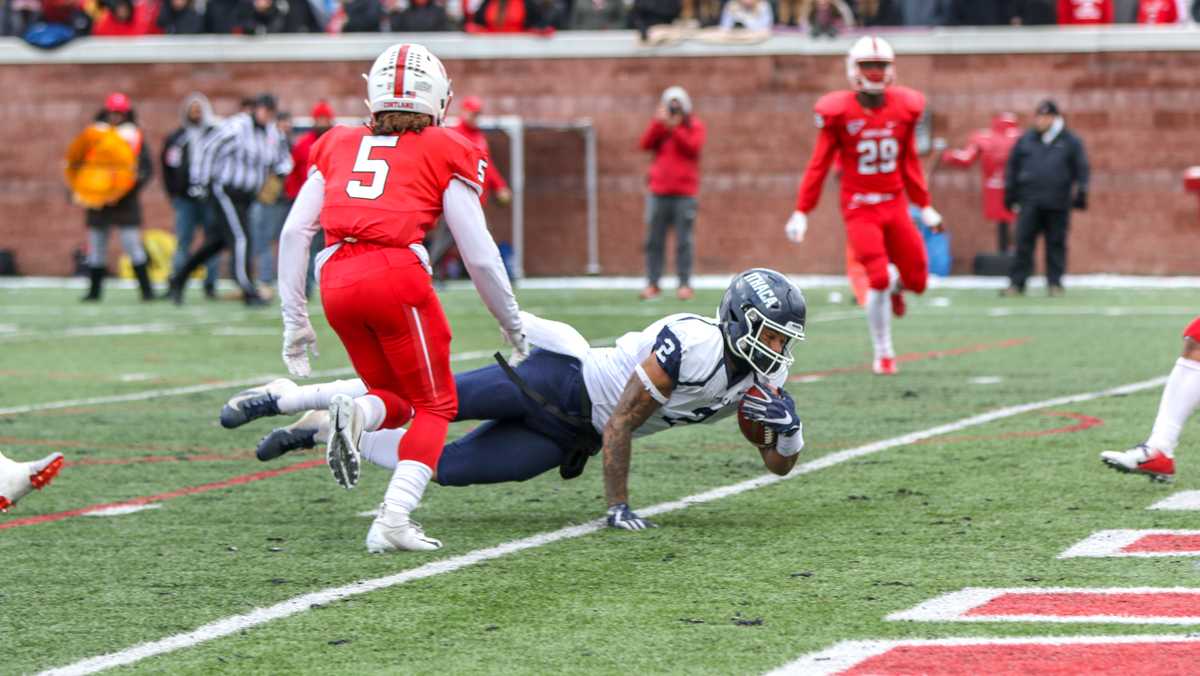 The crowd of 10,000 at the Stadium Complex was buzzing with enthusiasm despite the chilly conditions. Sophomore wide receiver Andrew Vito said that while the stadium was overwhelming at first, the team was able to put the big crowd behind them.

“You don’t usually play in front of double deckers [stands],” Vito said. “It was a great atmosphere, and I’m glad we came in here and played the way we did.”

The scoring got started for the Bombers on their second possession of the first quarter. At the 46-yard line, junior running back Kendall Anderson had a 5-yard run with a facemask penalty called on Cortland senior linebacker Kyle Richard to push the Bombers to the 34-yard line.

Sophomore quarterback Wahid Nabi then completed an 18-yard pass to Vito. After several runs by Anderson and Nabi, it was third and 1 and Anderson was stopped at the goal line.

On fourth-and-1, Nabi pitched the ball to Anderson who scored on a 1-yard touchdown run. With an extra point by freshman kicker Brian Fallon, the Blue and Gold were up 7–0.

After Cortland had a three-and-out on its next possession, the Blue and Gold got things rolling on offense again. Vito caught a 23-yard pass from Nabi down the middle of the field. On the next play, Nabi ran to his right and threw a touchdown pass to sophomore wide receiver Hayden Frey. With the extra point good, the South Hill squad went up 14–0.

In the Bombers’ first drive of the second quarter, Nabi passed to Vito for 32 yards to put them at the 25-yard line for a first down, but an offensive holding penalty pushed them back to the 35-yard line. The next play, Nabi was intercepted by Cortland senior linebacker Mark DeLuise, but the Red Dragons were unable to capitalize on the play, ending their drive still down by two touchdowns.

With 7:37 remaining in the half, Cortland had nine penalties for 92 yards.

“I thought, just too many penalties,” MacNeill said. “That really kind of sums it up. Pain is the teacher once again. The uncharacteristic personal fouls, it’s hard to wrap yourself around that.”

On second-and-7, junior running back Isaiah D’Haiti had a 2-yard run. On third-and-5, Nabi was sacked for a 9-yard loss by Cortland senior defensive lineman Tanner Olsen and junior defensive lineman J.J. Pasqualone. Fallon lined up for the 34-yard field goal but missed to keep the Bombers lead at 14.

Johnnie Akins, Cortland senior running back, picked up a 14-yard run for the Red Dragons to take over at the 47-yard line. Two plays later, a grounding penalty on Cortland junior quarterback Brett Segala pushed the Red Dragons to a third-and-21, and they were unable to convert on the next play.

On Cortland’s punt, Bombers’ senior linebacker Pat Minogue partially blocked the punt to set the South Hill squad up at its own 49-yard line. Anderson broke a 13-yard run on the next play.

Nabi then passed to junior wide receiver WIll Gladney for a 21-yard pickup. Nabi passed to Gladney again for a 17-yard touchdown reception. Fallon converted on the extra point and with 1:44 remaining in the first half, the Bombers found themselves up 21–0.

On second-and-15 for Cortland, Segala passed to senior wide receiver Nick Anderson for a 42-yard touchdown pass to put Cortland on the board for the first time in the game. With 43 seconds left in the first half, the Red Dragons trailed 21–7.

The Blue and Gold started with the ball in the second half but were unable to score. When Cortland tried to convert on fourth and 7 on the next drive, Segala was sacked by Bombers’ junior John Hadac. The Bombers started their next drive on the 49-yard line but were unable to capitalize on the field position.

With 2:08 remaining in the third quarter, Fallon kicked a 29-yard field goal to extend the lead 24–7.

On the first play of Cortland’s next drive, Akins broke a 65-yard touchdown to run. With the extra point attempt good by junior kicker Nick Mongelli, the Bombers led 24–14 with 1:49 remaining in the third quarter.

With 11:48 remaining in the fourth quarter, Segala rushed to the right for nine yards for a touchdown. With the touchdown, Segala scored his second of the day to narrow the lead to 24–21.

With 1:43 left in the game, D’Haiti fumbled the ball on the Cortland 12-yard line. With the momentum in Cortland’s favor, Segala passed on third-and-10 and was intercepted by senior linebacker Ryan Bronson to seal the deal for the Bombers.

“Our guys just prepared well,” Bombers’ head coach Dan Swanstrom.“We were ready to go, it was a great game, we competed till the bitter end, and I’m glad it was in our favor.”

Nabi said that winning the second–straight Cortaca Jug was important to the team.

“It feels good,” Nabi said. “I play for the seniors, and I want these guys to always have a lasting memory.”

The Bombers are now 8–2 on the season, while the Red Dragons drop to 7–3. Despite missing the NCAA tournament, the Bombers will play Utica College in the East Coast Athletic Conference Scotty Whitelaw Bowl at 1p.m.  Nov. 17 at Cornell University.