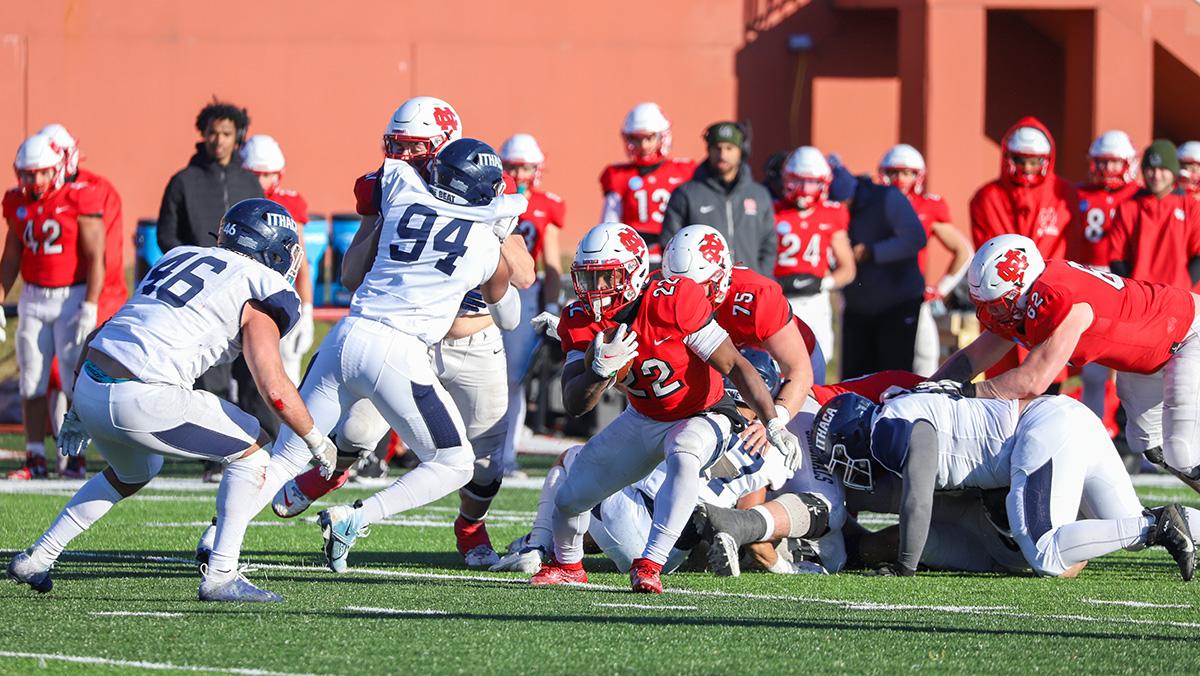 The No. 9/10 Ithaca College football team’s season came to a close Dec. 3, as the team fell to No. 1 North Central College 48–7 in the quarterfinals of the NCAA Championship at Benedetti-Wehrli Stadium in Naperville, Illinois. The loss provides the Bombers with a 12–1 overall record in 2022.

The Bombers’ offense was held in check, being held to just 21 rushing yards and 119 passing yards. The college’s only touchdown of the day was scored by junior running back Jake Williams, who recorded 15 rushing yards on the afternoon. Senior wide receiver Michael Anderson led the team with 59 receiving yards. 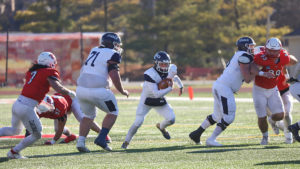 As for the opposition, the Cardinals put on an offensive clinic by recording 383 rushing yards and 200 passing yards. North Central’s 48 points was the highest total the South Hill squad’s defense allowed this season. Junior linebacker Jonathan Koumas led the Bombers’ defense with 10 tackles.

Head Coach Michael Toerper said that while the 2022 campaign came to an end, he is impressed with the team’s accomplishments this year.

“I’m proud of our guys [for] the way they fought,” Toerper said. “It’s a legendary team in Ithaca football history. And I’m just really proud of our fifth-years [and] our seniors and this whole program for the strides that we’ve made this season, getting to the postseason and just having a run and playing together and playing this as one unit. And, it’s hard to swallow the fact that we won’t be together tomorrow.”

The Cardinals were on the scoreboard after the first drive of the game, taking a 7–0 lead with 8:30 remaining in the first quarter. Senior running back Ethan Greenfield rushed up the middle and past this goal line for a one-yard touchdown. This was followed by sophomore kicker Tanner Rains converting the extra point. 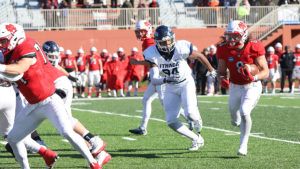 North Central College senior running back Ethan Greenfield makes a run into Bombers territory during the first half of the national quarterfinal game. Eleanor Kay/The Ithacan

North Central found the end zone again with 2:25 left in the first quarter, extending its lead to 14–0. Sophomore quarterback Luke Lehnen completed a deep pass near the home sideline to junior wide receiver DeAngelo Hardy, who ran into the right corner of the end zone for a 41-yard touchdown. Rains then sent the PAT through the uprights.

The defenses of both squads were dominant for the majority of the second quarter, as scoring didn’t resume until there was 2:46 to go in the first half. The Cardinals extended their advantage to 21–0, as Greenfield ran up the middle for a four-yard touchdown rush. Rains then made the extra point. Senior defensive back Derek Slywka said that despite Greenfield’s big game, he was proud of how the team competed.

“We knew they had a big [offensive] line and they were going to try to run the ball,” Slywka said. “[Ethan] Greenfield’s been there a while, he’s a seasoned back, we knew we’re gonna have to tackle well. … We played hard, nothing always goes according to plan sometimes. But, we left it all out there.” 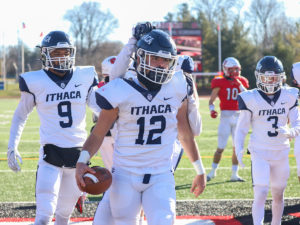 Ithaca College junior running back Jake Williams scored the only Bomber touchdown of the game in the first half. Eleanor Kay/The Ithacan

The Bombers got on the scoreboard with 1:21 to play in the second quarter, trimming their deficit to 21–7 against the Cardinals. Senior quarterback A.J. Wingfield completed a screen pass to Williams, who hustled past the goal line for an 11-yard touchdown. Senior kicker Nicholas Bahmonde powered the PAT try through the uprights. This would be the score as the game entered halftime.

North Central opened the scoring in the second half, extending its lead to 28–7 with 10:56 remaining in the frame. Lehnen threw a pass to Hardy, who then ran and dove into the end zone for a 41-yard touchdown. The extra point attempt by Rains was successful.

The Cardinals went on an offensive surge over the next 6:04, making it a 41–7 ballgame with 4:52 left in the third quarter. Lehnen broke away from the defense and sprinted toward the left corner of the end zone for a 45-yard touchdown rush, but the PAT was no-good. The quarterback then completed a two-yard touchdown pass to Hardy, who made a diving catch in the right corner of the end zone. Rains followed this by converting the extra point. 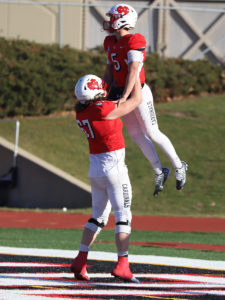 North Central kept its offense rolling at the start of the fourth quarter, advancing the score to 48–7 against the South Hill squad. Lehnen took off for the right corner of the end zone, posting 12-yard touchdown rush with 13:10 to go in the contest. Rains slit the uprights with his PAT try.

This would hold as the final score, as neither team scored during the remainder of the contest. Toerper said he is most pleased with the way this year’s group carried itself and how it went about its business each day.

“[I’m most proud of] their attitudes every day,” Toerper said. “We talk about in this program, you’ve got to bring a positive attitude to everything that you do. And their ability to bring that over and over and over again, is not easy. …  I think that’s really what fueled this team, is their love for each other and their excitement.”