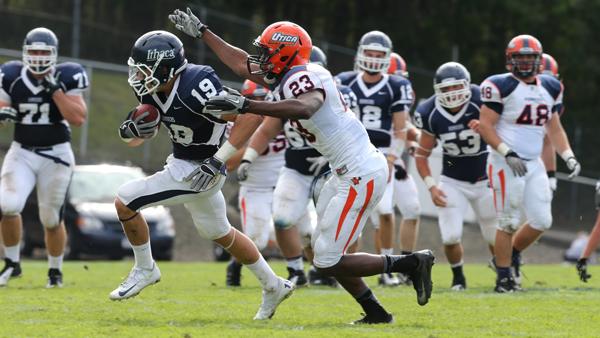 Junior quarterback Phil Neumann threw for two of the three early touchdowns, connecting with junior tight end Jared Prugar over the middle for a 29-yard touchdown midway through the first quarter. Early in the second quarter, Neumann found senior wide receiver Joe Ingrao for a four-yard touchdown to make it 21-0 Bombers.

Neumann set a career high with 310 passing yards, becoming the first Bomber quarterback to pass the 300-yard total since Rob Zappia on Oct. 23, 2010 against Springfield College. Neumann said he was unaware he even passed the 300-yard milestone.

“It’s great, I didn’t know I had that many,” he said. “There were a lot of big plays in the passing game, offensive line did a great job.”

Neumann’s 310 passing yards were enough to outperform Utica senior quarterback Andrew Beckwitt, who came into the game ranked 15th in the country in passing yards per game. Neumann said he only focused on his own performance despite the impressive statistics of his quarterback counterpart.

“He’s a great quarterback, and he’s had a lot of success,” Neumann said. “I don’t compare myself to him. He plays against our defense, and I play against theirs.”

Ingrao, Neumann’s favored receiver so far this season, caught 10 passes for a career-high 174 yards. His one-handed catch late in the fourth quarter put the Bombers at the Pioneer one-yard line, and senior running back Jarret Naiden ran it in to give the Blue and Gold a 38-16 lead. That reception was one of five receptions Ingrao made on third or fourth down. Ingrao had seven receptions that gave the Bombers the first down — including two of them for touchdowns. Ingrao said the Pioneers came out in cover one and cover three defenses, which was what the Bombers expected.

“We didn’t make a lot of adjustments today,” he said. “We came out strong, and they were giving us what we wanted and we stuck to our game plan.”

The Bombers also found success with the use of the “Wildcat” offense. Freshman wide receiver Josh Oliver was used as a quarterback and rushed for two touchdowns. Oliver said his reads on both occasions led him to keep the ball and run. He said his size, or lack thereof, makes him a weapon in the offense.

Head Coach Mike Welch said the “Wildcat” is just part of his plan to improve the Bombers’ performance in the red zone, a major issue earlier this season.

Welch has a new issue on his hands, as senior middle linebacker Will Carter was helped off the field in the second quarter. Reports indicate that he suffered a torn ACL that would end his season. Carter came into the game as the team’s second leading tackler behind junior Brian Hardenberg, who sat out Saturday’s game with an injury. Welch said replacing Carter is almost impossible.

“You can’t replace a Will Carter,” Welch said. “He’s a leader and a great player on the field. I feel confident we’ll have someone step in, but as a total package he’s something special to us.”