Football looks to build off defense powerhouse this season 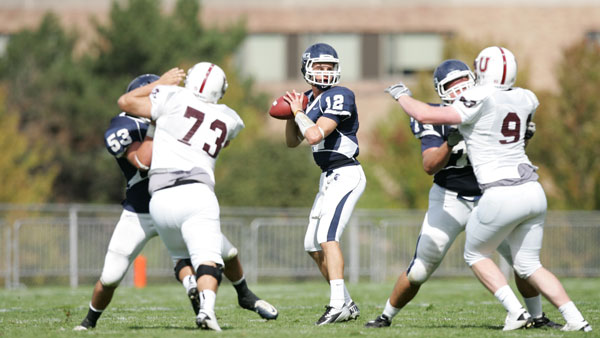 After another middling season, the Ithaca College football team saw its postseason drought extend to four years, the longest ever for one of the most successful Division III programs.

The Bombers lost three of its final six games by a touchdown or less after starting the season 4–0. Their luckless season culminated in the Cortaca Jug game when Clay Ardoin ’13 was tackled a yard short of the end zone in the Bombers’ final offensive play of the season.

McDonough’s defense was the strongpoint for the Blue and Gold, as they finished 24th in Division III in yards allowed. The defense is likely to be an asset again, with eight returning starters as well as graduate linebacker Will Carter, who received a medical redshirt after a season-ending knee injury against Utica College.

While the defense should serve as an anchor for the Bombers, the offense needs to improve if the team wants to end its postseason drought. Senior quarterback Phil Neumann threw 15 touchdowns and more than 1,500 yards as the starter last season. This season, however, he is without running backs Clay Ardoin ’13 and Jarret Naiden ’13 as well as wide receiver Joe Ingrao ’13.

Junior Tommy Pedula and senior Rakim Jones are the two runners for the halfback job, while junior Joel Lynch leads an open competition for wide receiver. Neumann said he is confident all starters have the ability to contribute to the offense this season.

“We have a lot of really great receivers who just haven’t got playing time,” Neumann said. “They’re solid receivers. Obviously Joel played a lot last year, and he’ll be coming back. Guys like [juniors] Chris Bauer, Matt Pinzka and Vito Boffoli, I have no hesitation with them out there.”

The Bombers’ offense was ranked 185th overall in total yards for Division III last season, which was a result of their ball control–style game plan. Offensive coordinator Ryan Heasley said the team has to work toward a more effective offense.

“Obviously, we’d like to score more points, but we need to be more consistent with what we do,” Heasley said. “From an outside perspective, I don’t pay attention to [statistics], but on the inside, we just to try push each other every day.”

Heasley said the open wide-receiver competition and the duel between Jones and Padula at running back signifies one of the most open camps he has been a part of since joining the team. The competition comes from the limited amount of starting positions available this season. This is a promising sign for an offense that is keen to include various personnel packages in its weekly game plan.

Heasley was reluctant to name any definite starters, despite the fact Lynch was the lone starter to return at a skill position. Lynch said he has been working with Neumann throughout the offseason to get on the same page prior to practice.

“As soon as the season ended, we’ve been getting together as much as possible to work on routes,” Lynch said. “Working off of last year, we’ve had pretty good chemistry, and it’ll get even better as the days go on.”

Neumann said the main lesson he has passed down as a veteran player is the willingness to learn among all the players.

“Those guys are willing to learn, and by all means, we can learn from our coaches and whatever big games we’ve played in,” he said. “Those guys are football players, and people are going to find that out, because I think they’re going to have good years.”