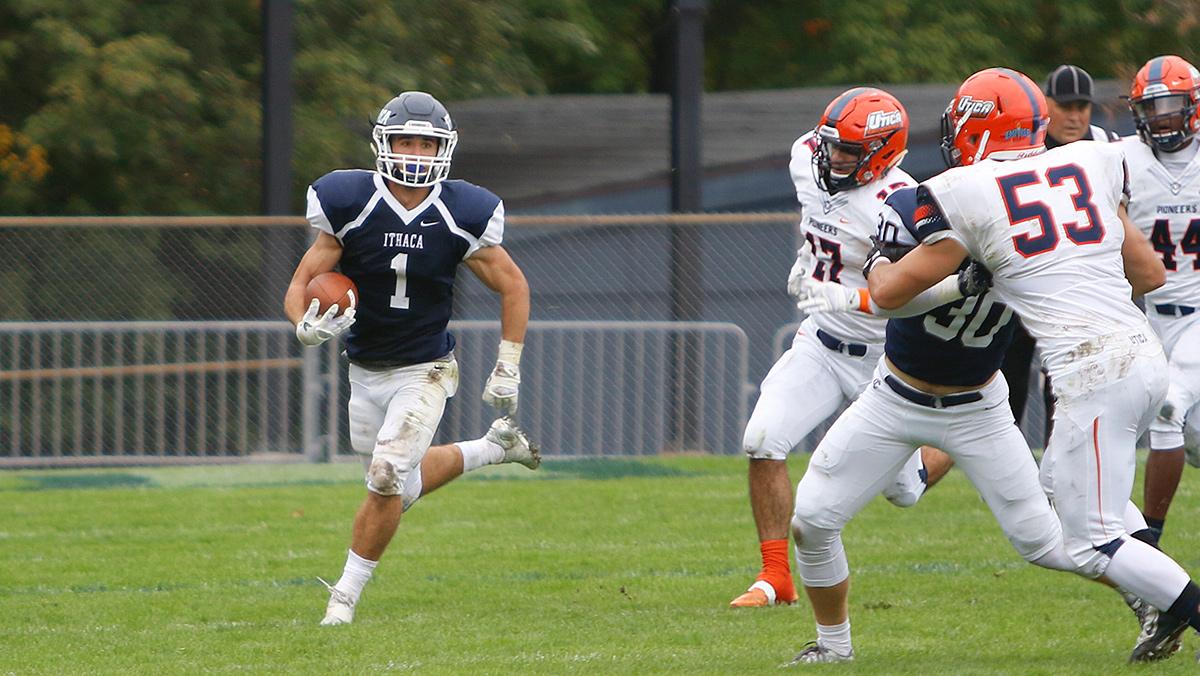 Football, more than most other sports, is built around players who are specialized to play one position. But junior cornerback Jordan Schemm’s ability to play multiple positions has been part of his role on the Ithaca College football team.

During his senior season at North Broward Preparatory School, Schemm spent most of his time on the football field as a wide receiver. When he came to the college in 2014, he switched to the defensive side of the ball and joined the Bombers’ roster as a safety.

Now, Schemm is starting at cornerback, another defensive position, and is proving to be a versatile player who can be used anywhere in the secondary.

The defensive secondary is made up of cornerbacks, who guard wide receivers man-to-man and need to be quick, and safeties, who help in zone coverage or guard tight ends and slot receivers.

Schemm said he made the move from safety to cornerback early in his freshman year due to a lack of personnel at the position.

“I knew coming in that I wasn’t going to play receiver here, and I thought I was going to be playing safety,” Schemm said. “One day, the coaches decided to try me out at corner, and then they decided to put me at corner.”

Defensive Coordinator Mark McDonough said it was Schemm’s athletic ability that piqued the coaching staff’s interest in moving him to cornerback.

“It’s our job as coaches to put the best players on the field,” McDonough said. “Early into training camp, coach Mrozinski, our defensive backs coach, told me that Jordan had really quick feet, and to play cornerback, you need quick feet.”

The following season, in 2015, Schemm was moved back to safety and saw playing time in nine of the Bombers’ 10 games, recording 33 tackles and two interceptions. During the Bombers’ 38–18 win over Alfred University on Sept. 26, 2015, he made eight tackles, including a half tackle for a loss.

“Playing receiver allows me to be able to identify certain plays faster because I can recognize how receivers line up to run certain routes,” Schemm said.

McDonough said Schemm’s versatility is a product of his work ethic and desire to help his team.

“He is always mentally prepared,” McDonough said. “On field, he works hard at everything he does. He approaches every single thing he does with the intention of getting better, and he always works his tail off. He has fast feet, good hip movement, he runs well, he’s physical and competitive.”

Schemm was moved back to corner for the 2016 season and is starting for the Bombers’ defense, which is allowing an average of about 20 points per game so far this season. Schemm has a record of 25 tackles, 2 1/2 tackle for a loss, one interception and one fumble recovery to help the Blue and Gold to a 3–3 record.

“He’s the kind of guy who comes in ready to play hard and ready to work to get better,” Michaels said. “He’s one of the smarter guys that we have on the team, so he’s able pick up on things quickly.”

Despite cornerback and safety positions’ operating in similar areas of the field, they have very different requirements once the ball is snapped. Schemm said there were aspects of both positions that he enjoyed.

“As a safety, I was a lot more involved in the running game, whereas at corner, I’ll get blocked almost immediately on run plays,” Schemm said. “As a corner, I like the challenge of having a one–on–one matchup with a receiver. I don’t really have one position that I prefer — I care more about helping the team win.”

Michaels said Schemm’s experience as a safety makes him a better cornerback.

“I think playing safety gives him a deeper understanding of what we’re trying to do schematically on defense, making corner an easy adjustment for him,” Michaels said. “He always seems to be there when the ball is snapped.”

Schemm said he likes being able to fill in for whatever position is needed in order to help the team.

“It’s fun playing multiple positions,” Schemm said. “It’s definitely a challenge, but ultimately, I will do whatever the coaches feel will help us win no matter what positions I’m playing.”