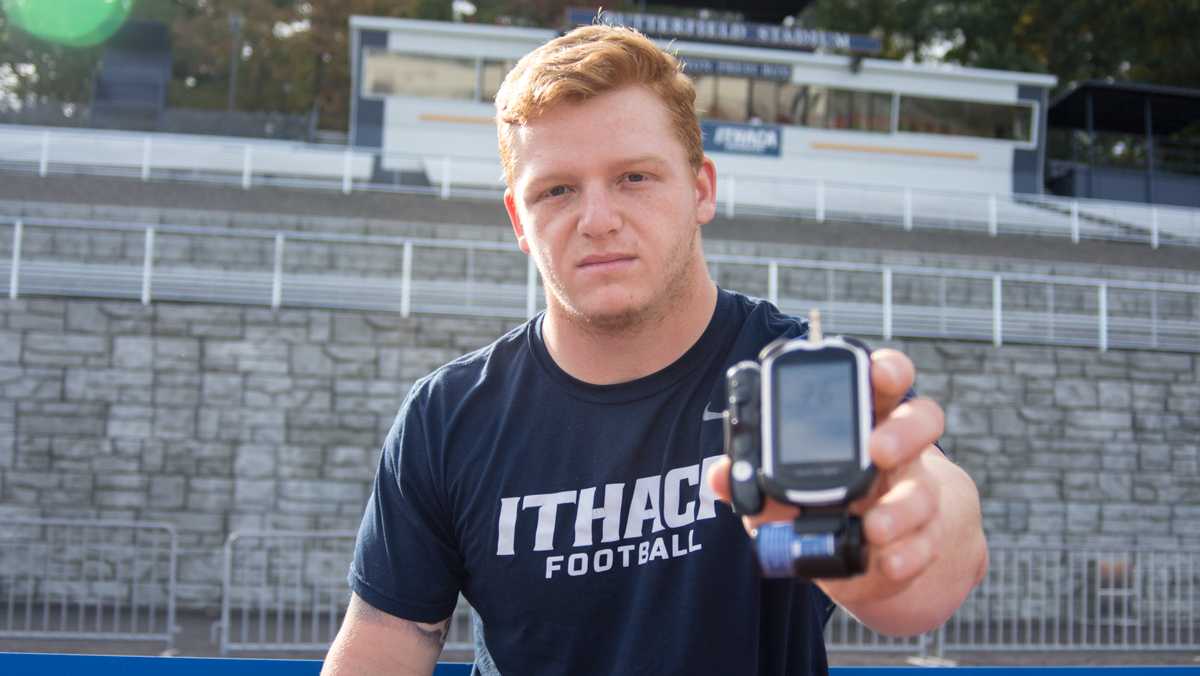 PHOTO ILLUSTRATION BY TED ZERIVITZ
Senior Jack Yule has battled Type 1 diabetes since his diagnosis the September of his freshman year of high school. Yule uses diabetes to motivate him and teach others about the disease.
By Matt Hornick — Senior Writer
Published: September 13, 2017

At the end of practice for the Ithaca College football team, waves of players jog up the hill from the practice fields to the locker room. Senior tight end Jack Yule has to quickly stop at the sideline to grab his “goodie bag” before joining the rest of his teammates in the locker room.

Inside this navy–blue duffel bag are candy and juice boxes, which are crucial for Yule, who has diabetes.

Along with the actual goodies in the bag, Yule keeps a collection of medical supplies for when he needs to check his blood sugar or take an infusion of insulin. Yule, who was diagnosed with Type 1 diabetes early into his freshman year of high school, said there was never a circumstance in which he would not be able to continue playing football, which he has been playing since he was 9 years old.

“I never wanted to let having diabetes define me,” he said. “My parents and doctors thought the best thing for me was to get back to my regular life as quickly as possible, so there was never a point where not playing football was going to be in the question.”

Yule said having a routine is the best way for him to manage his diabetes as a collegiate athlete.

Since his diagnosis in September 2010, the only two football games Yule missed were in the first two weeks of his freshman season in high school because he took some time to figure out how to manage a disease that was new to him. Yule spent this time learning about how to check his blood sugar and administer insulin.

There have been some prominent athletes to have success with diabetes, but not many in football. Miami Dolphins starting quarterback Jay Cutler was diagnosed with Type 1 diabetes in 2008, just two years into his NFL career, and is now beginning his 12th season playing professional football.

Yule’s mom, Janet, said she was initially worried about her son taking the field so soon after his diagnosis, but his endocrinologist assured her he was ready.

“Jack’s doctor was incredibly confident that nothing bad would happen to him by returning to football so quickly after his diagnosis, and that confidence was enough for me to not be nervous,” Janet said.

Yule said his mother will still text him on occasion just to ask what his blood sugar levels are.

After not playing as a freshman and playing nine out of 10 games his sophomore year, Yule played all 10 games during his junior season. The one time diabetes interfered with him was during the Bombers’ 2016 season opener against Union College, when he checked his blood sugar at halftime and it was too high. Yule said that when his blood sugar spikes his mouth dries out, he gets a bad headache and begins to feel sluggish. After sitting out the entire third quarter, he was able to return to that game and help his team secure a 14–9 victory.

Yule started all 10 games for the Bombers during the 2016 season and caught 20 passes for 231 yards, an average of over 11 yards per catch, while serving as a safety blanket for quarterback Wolfgang Shafer ’16. Shafer said he never saw diabetes hinder Yule’s performance on the field come game day, but it could sometimes affect his participation at practice.

“Jack was one of our number one targets in the passing game, so when his blood sugar was too high or too low, he would miss out on some important reps during the practice week,” Shafer said. “Although I can say that his diabetes held him back in terms of the amount of time and reps he contributed to in practice, his leadership, mindset and athletic ability were, no question, some of the best on the team.”

Football head coach Dan Swanstrom said he was never worried about how diabetes might affect Yule as a football player because he is not the first diabetic Swanstrom has coached.

“When I was at Johns Hopkins, I coached a kid named Brian Hopkins, who was a tight end with almost the exact same build as Jack, who had diabetes and was a three-year starter for us,” Swanstrom said. “He had to go through the same things as Jack, and he ended up being an all-conference player.”

Since starting college, Yule said, he has learned how to completely manage his diabetes on his own.

“When I was in high school, my mom wanted to control everything related to my diabetes,” he said. “Now that I’m in college, I meet with my doctor on my own, I deal with insurance, and I schedule all of my deliveries.”

However, Yule is not completely on his own, as he has a strong support system around him that always keeps his health in mind.

Senior cornerback Jordan Schemm, Yule’s roommate of the past three years, said he always keeps an eye on how well Yule monitors his blood sugar.

“I try to be aware of what’s going on,” Schemm said. “There are times when there will be a change in his mood, and I’ll always be straight–up and ask him what his sugar is.”

Yule said he tries to pay it forward by speaking to the Acute Care and Emergency Management in Athletic Training class at the college about how to treat athletes with diabetes.

During high school, he spoke at youth football camps to spread the message that having diabetes does not have to prevent someone from playing sports. Yule said he was inspired to speak out by some of his friends who are also athletes with diabetes.

“I enjoy advocating about diabetes and showing other people that it is really just a part of my life and not a nuisance,” Yule said. “I can’t do anything to change it, so I might as well do all I can to make other people comfortable living with diabetes.”