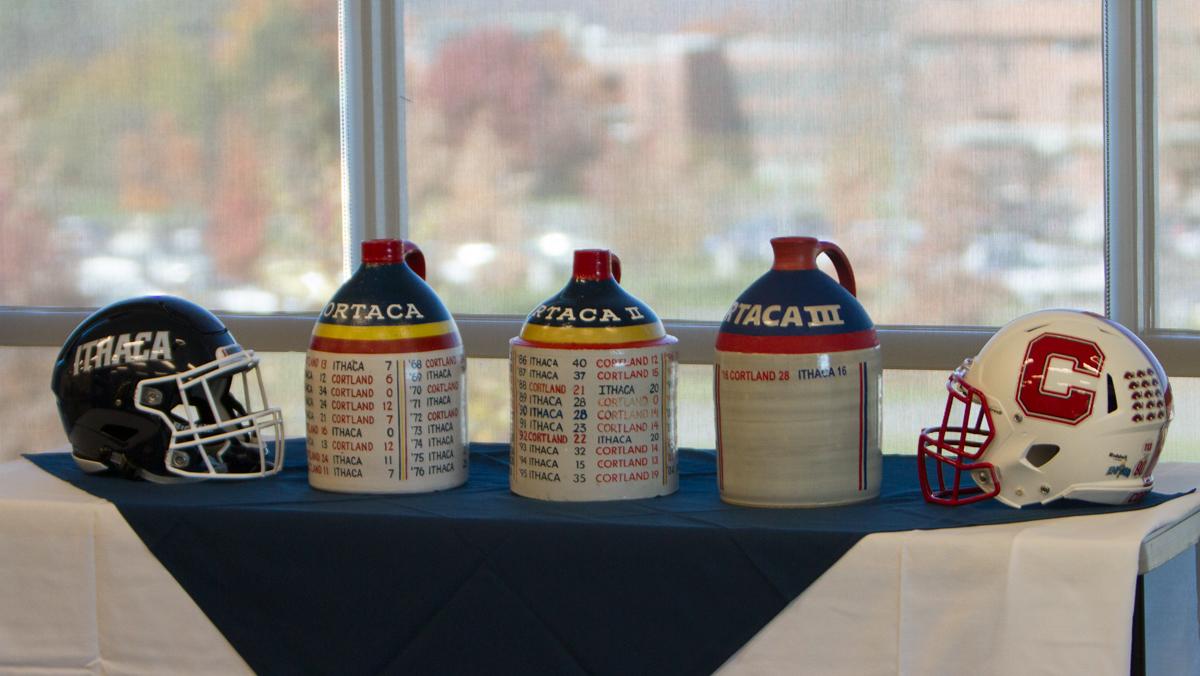 MAXINE HANSFORD/THE ITHACAN
The winner of the 59th annual Cortaca Jug game, which is on Nov. 11, 2017 at Butterfield Stadium, will take home all three jugs.
By Matt Hornick — Senior Writer
Published: November 9, 2017

Since Ithaca College and SUNY Cortland started competing for the Cortaca Jug in 1959, the longest win streak in the rivalry came between 1973 and 1981 when the Bombers kept possession of the jug for nine years. A win for the Red Dragons on Nov. 11 at Butterfield Stadium would put them one win away from tying that streak.

Senior linebacker Kenny Bradley said beating Cortland this year would be the pinnacle of his time as a Bomber.

“Any time you can win the Cortaca Jug is a huge moment,” Bradley said. “Being able to get this win as a senior would be my most memorable game as an Ithaca football player. We’ve accomplished some great things in my time here, but being able to bring home the jugs would be unmatched no matter what else happens in my career.”

Both teams are 6–3 so far in their 2017 campaigns with the Bombers winning six of their last seven games since making the change to freshman Wahid Nabi as quarterback. They are coming off a 20–3 win over Union College that helped them clinch at least a share of the Liberty League Conference Championship.

Senior cornerback Jordan Schemm said a new season brings a fresh opportunity to end a losing streak that this year’s team has no desire to be a part of.

“Winning would be amazing,” Schemm said. “It would be a memory that not just the senior class, but everyone on the team will have for the rest of their lives. The way I look at it is, the 2017 Bombers have never played in a Cortaca game; the 2017 Bombers haven’t lost seven straight Cortacas. This is a different team than it was last year or two years ago, and this is our one shot.”

Head coach Dan Swanstrom, who is coaching in his first Cortaca Jug game, said he is not worried about his team’s ability to mentally adjust to the gravity of this game because much of the team’s season has had a similar mood.

“We’ve been playing big games all year,” Swanstrom said. “We played two ranked opponents right out the gate, we went on to conference games and more ranked opponents and then Union on a seven–game winning streak for the conference championship, so we haven’t had a situation where our guys can exhale.”

The Red Dragons defeated Utica College 24–23 in their last game, which secured them second place in the Empire 8 Conference.

Cortland head coach Dan MacNeill said the Cortaca Jug game is one of the most exciting parts of the season and that no win in the rivalry comes easy for either team.

“People choose to play football at these schools to be a part of this rivalry,” MacNeill said. “Our guys understand there’s no entitlement here and the jugs aren’t theirs yet, they need to earn them.”

Swanstrom said anyone who gets too caught up in the rivalry will see their play suffer.

The Bombers and Red Dragons have played four mutual opponents, with each team winning two games. The Blue and Gold defeated St. John Fisher College and lost to Alfred University, while Cortland beat Alfred and lost to St. John Fisher. Both teams lost to SUNY Brockport and won against Utica.

While being the home team may be considered an advantage, the Bombers have lost seven of the previous 10 Cortaca jugs at Butterfield Stadium. Senior running back Tristan Brown said having his senior Cortaca at home in what will likely be his final home game would make winning even better.

“Last game at Butterfield is always a big deal, and I remember how emotional it’s been for seniors over the past few years, so getting a win would be huge for the whole senior class,” Brown said. “I would love to be able to bring the jugs back to Ithaca in my senior year, and I think everyone is ready to turn over a new leaf in the rivalry.”

Dan Bach, Cortland senior offensive lineman, said finishing off his collegiate career winning his fourth of four Cortacas is something he would cherish, from what he said he has heard from his school’s alumni.

“Based off of our alumni who have won all four Cortacas, it seems like the most incredible feeling,” Bach said.

The South Hill squad has been anchored by a defense that is allowing just 14.56 points per game and just three total points in its last two games. The Blue and Gold will try to slow down the Red Dragons’ offense that is averaging 29 points per game. Cortland’s offense is led by senior quarterback Steven Ferreira, who is completing 60 percent of his passes this season for 20 touchdowns and just six interceptions.

Ferreira was unable to play in the Cortaca Jug game last year due to injury.

With their win over Union, the Bombers have guaranteed themselves at least one postseason game. Regardless of what happens between Ithaca and Cortland, if Union defeats Rensselaer Polytechnic Institute on Nov. 11 the Bombers will receive an automatic bid to the NCAA playoffs. If RPI beats Union, it will go to playoffs and the Blue and Gold will play in an Eastern College Athletic Conference bowl game. The Bombers and the winner of the matchup betwen Union and RPI will be named Liberty League co-champions, but only one team will receive a playoff berth.

Senior linebacker Dan Loizos said the team is trying to treat this week like every other week of the season.

“As captains, we’ve been trying to keep our preparation the same,” Loizos said. “This is just another nameless and faceless opponent. We’re trying not to hype it up too much and get lost in that hype.”