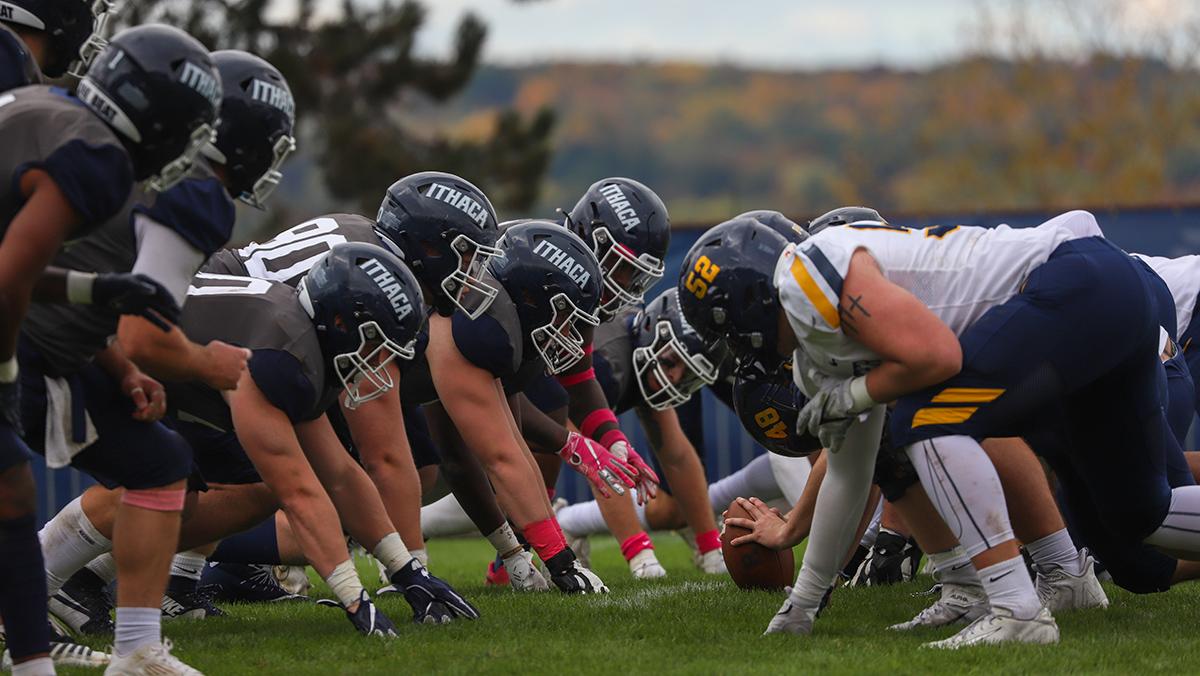 The No. 12 ranked Ithaca College football team defeated the University of Rochester Yellowjackets 56–10 at Butterfield Stadium on Oct. 8. The victory improves the team’s record to 5–0 on the season.

The South Hill squad’s defense managed to limit Rochester, holding the opposition to just 55 passing yards and going 2-for-13 on third down attempts. Graduate student linebacker Matt DeSimpliciis led the team with 11 tackles, while graduate student defensive back Michael Roumes had 10 tackles. 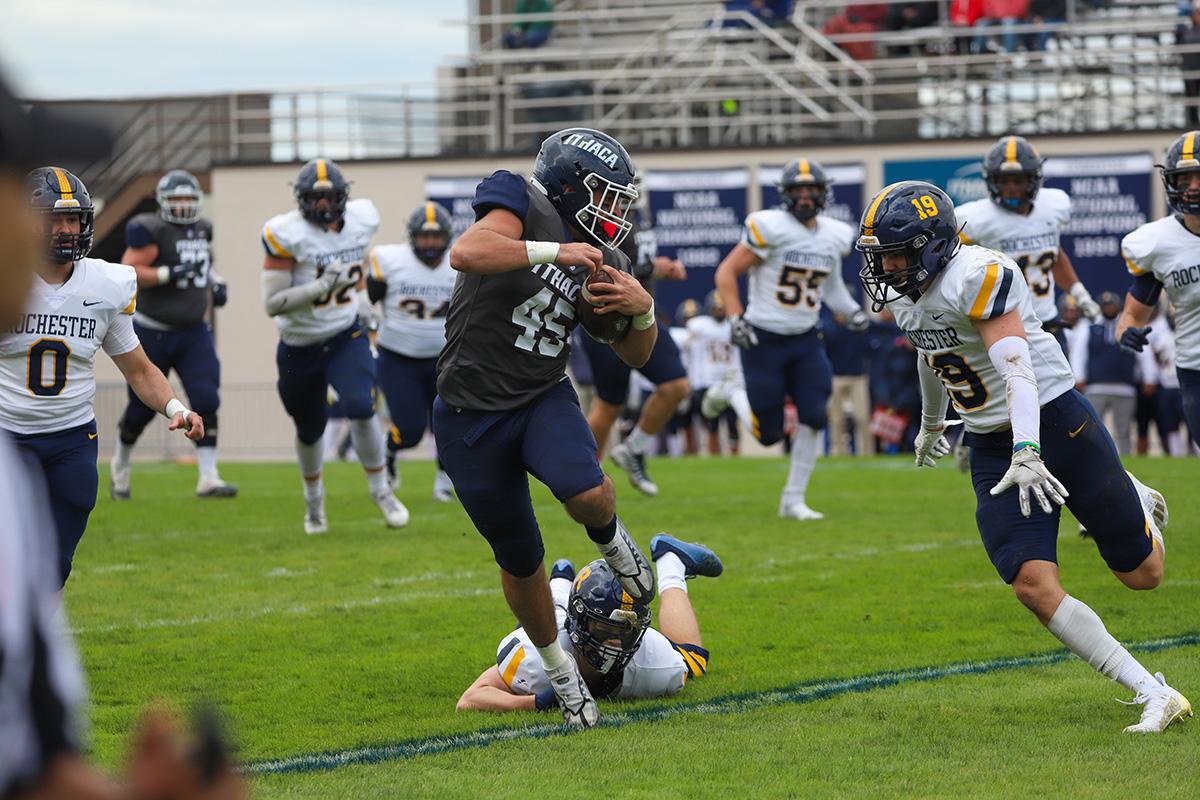 Junior running back Jake Williams tries to escape from a defender while University of Rochester sophomore Jack Yensel closes in for the tackle. Brendan Iannucci/The Ithacan 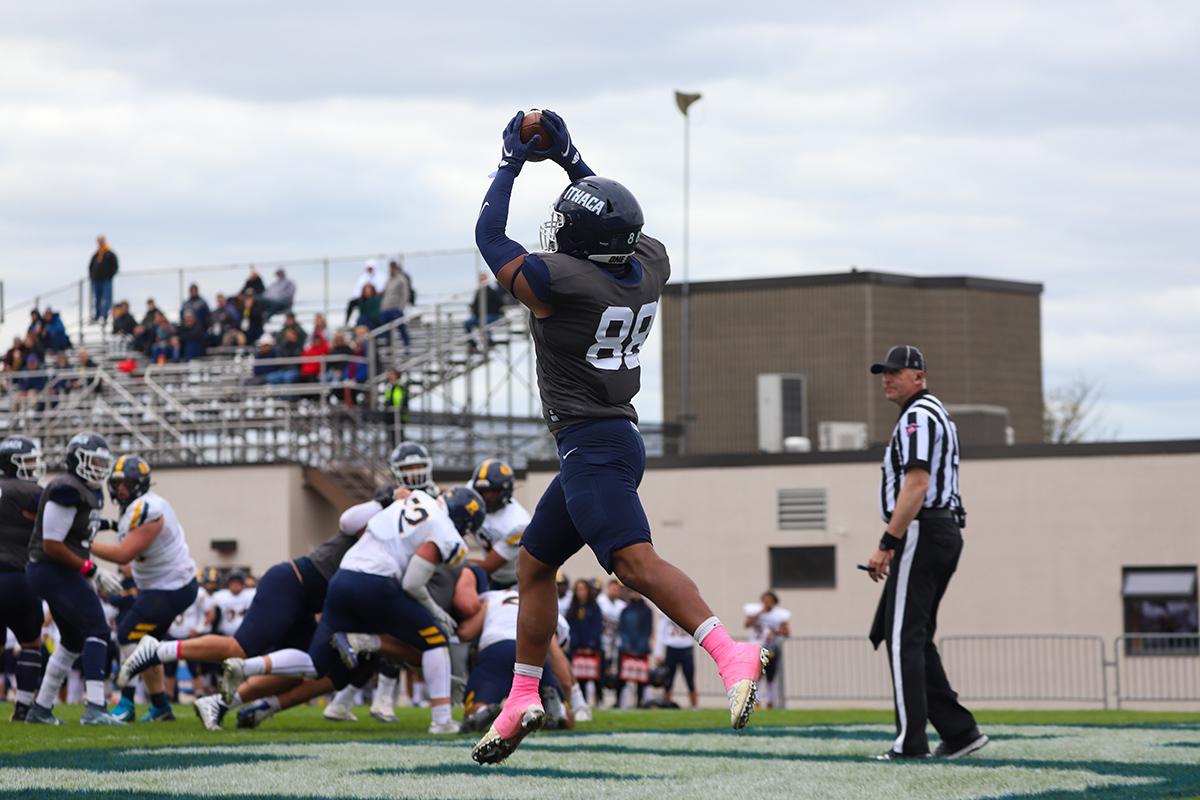 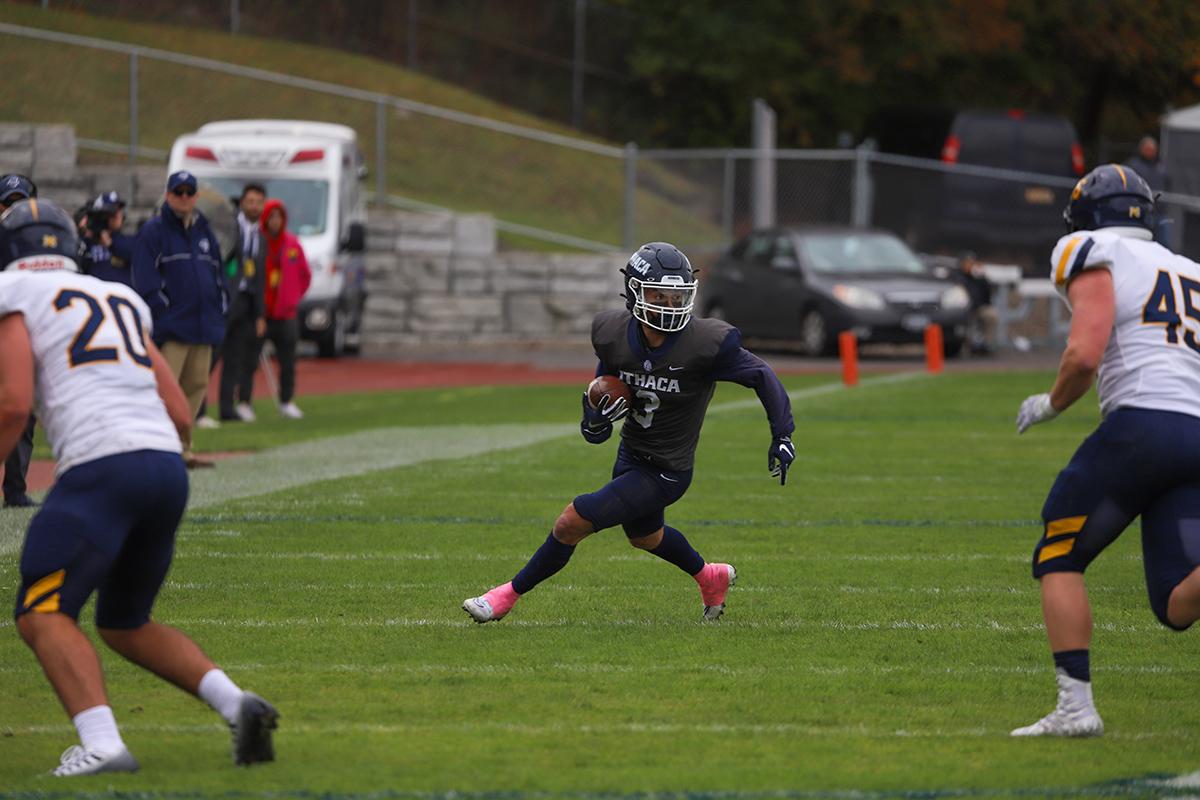 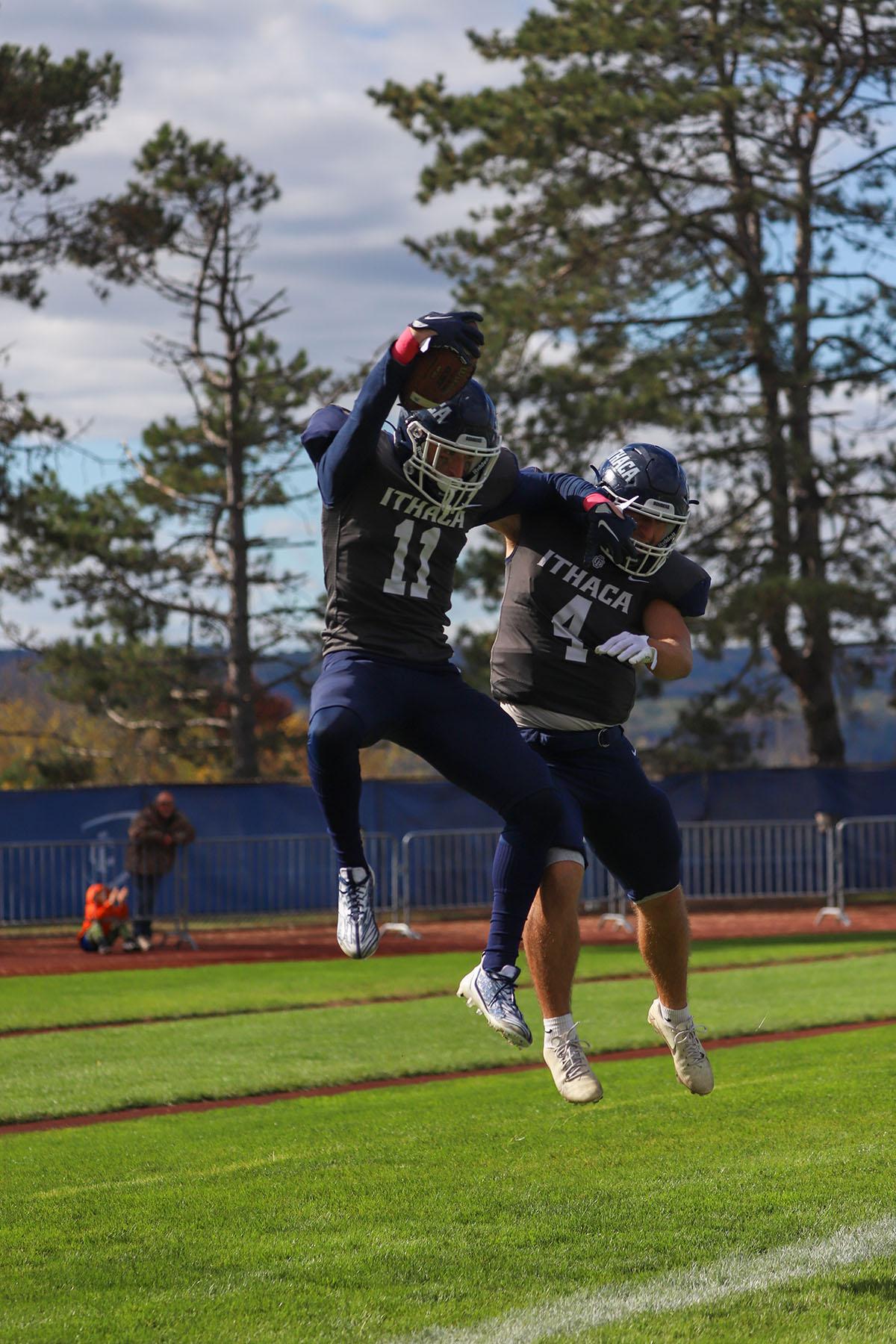 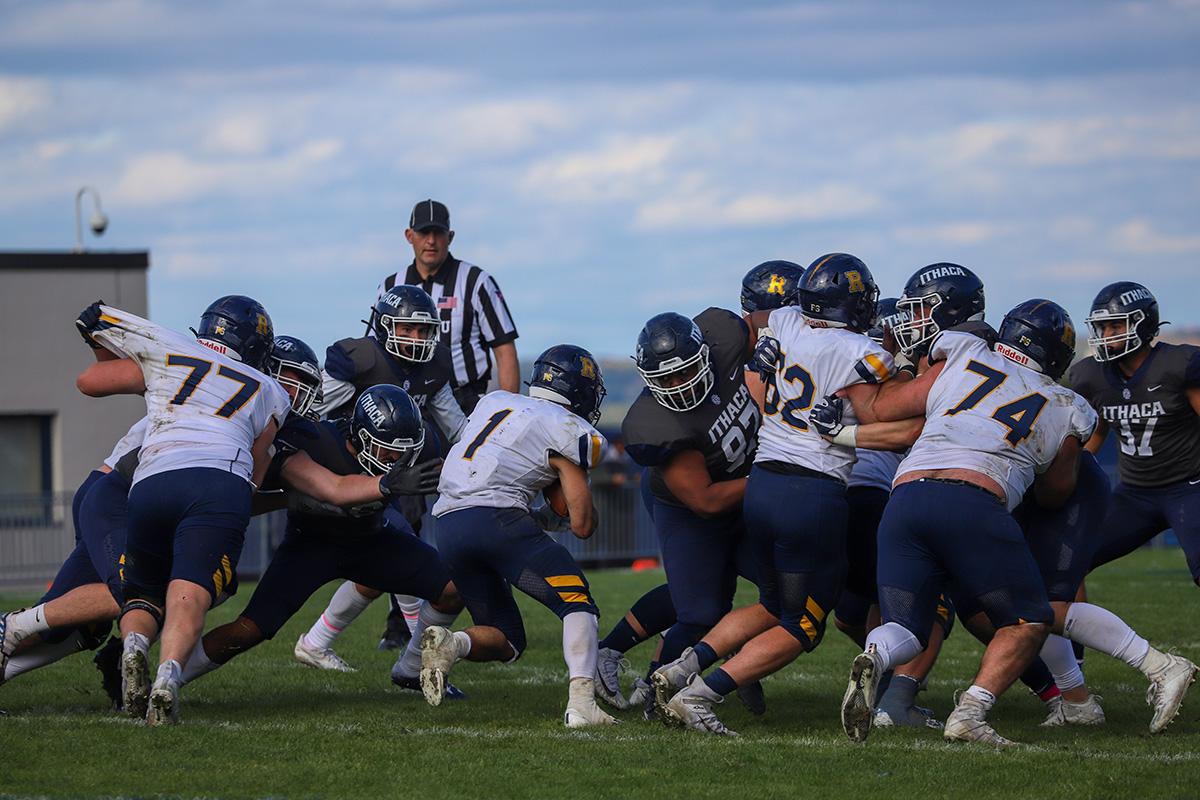 University of Rochester junior running back Daniel Papantonis runs into a horde of Bombers defenders at the line of scrimmage. Brendan Iannucci/The Ithacan 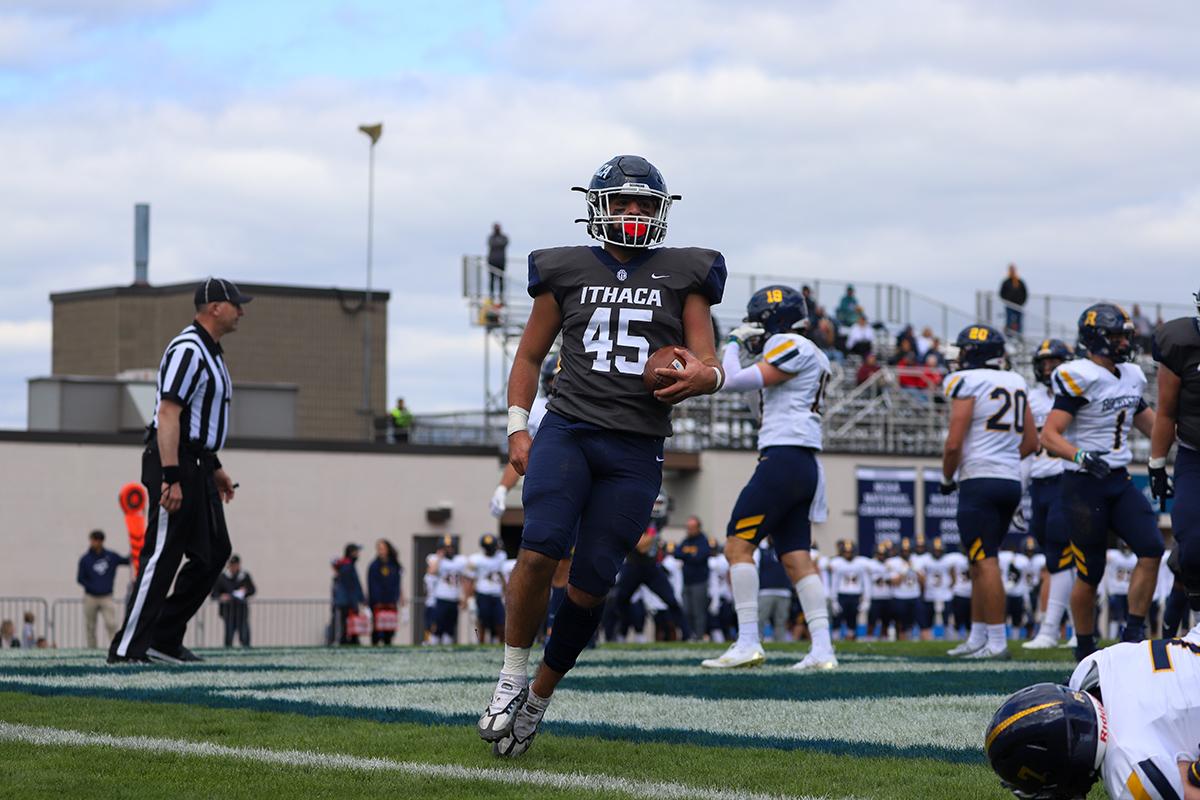 The Bombers’ offense didn’t waste any time getting on the scoreboard, taking an 8–0 lead against the Yellowjackets with 12:30 remaining in the first quarter. It took Ithaca College just 2:19 to put together an eight play, 41-yard drive, which concluded with Williams finding the endzone on a four-yard touchdown rush. This was followed by Roumes running past the goal line for a successful two-point conversion.

The South Hill squad added to their lead with 4:43 to play in the first, making it a 14–0 ballgame. Senior quarterback A.J. Wingfield completed a screen pass to senior tight end Dan Mason, and the tight end then hustled to the left corner of the endzone for a 15-yard touchdown. Senior kicker Nicholas Bahamonde then attempted an extra point that sailed to the right of the uprights.

The Bombers’ offense continued to produce in the second quarter, extending their lead to 21–0 with 8:59 to go in the frame. Wingfield completed a one-yard touchdown pass to senior tight end Jon Crowley in the back of the endzone. Bahamonde’s PAT attempt was successful.

The Yellowjackets promptly responded, narrowing the South Hill squad’s lead to 21–7 with 6:02 remaining in the second quarter. Sophomore quarterback Ryan Rose completed a pass to junior wide receiver Trey Johnson for a 28-yard touchdown. Sophomore kicker and punter Jordan Laudani followed this by sending the extra point through the uprights.

Rochester tacked on a few more points toward the end of the half, making it 21–10 in favor of the Bombers with 0:42 to go. Laudani converted a 24-yard field goal try to trim the college’s lead.

Tensions appeared to be high in the first half, as the college was charged with six penalties and Rochester had four penalties through the first two quarters. Bombers head coach Michael Toerper said he and the coaching staff spoke with the team about maintaining its composure as the game approached the break.

“I think that we need to learn how to play with emotion but not let emotion play us,” Toerper said. “We started to make things personal rather than just doing our job, play after play. And that’s one of the messages we shared with them at halftime. Just come out [and] be excited to play with each other, it’s all about us. And let’s just go one play at a time.”

The South Hill squad struck first in the second half, extending its lead to 28–10 with 10:15 to play in the third quarter. Wingfield completed a screen pass to junior running back Jalen Leonard-Osbourne, who ran to the endzone for an 11-yard touchdown. Bahamonde followed this with his second successful extra point of the afternoon. The running back said he was pleased to contribute to the win, recording one of the Bombers’ seven touchdowns.

“We kind of put it all together,” Leonard-Osbourne said. “Everybody [touched] the rock, [and] everyone [had] an opportunity to score.”

The Bombers kept the offense rolling later in the stanza, taking a 35–10 advantage against Rochester with 6:28 remaining. Wingfield let the ball fly on a 36-yard touchdown pass to senior wide receiver Jake Ross in the left corner of the endzone. Bahamonde then sent the PAT through the uprights.

The South Hill squad’s special teams gave the team some points with 0:30 left in the third, extending its lead to 42–10. Senior wide receiver Michael Anderson received the punt from Rochester sophomore kicker and punter Alex Wing, and he took the ball to the house for a 56-yard touchdown return. Bahamonde added another tally with a successful extra point.

The Bombers tacked on some insurance points with 8:27 remaining in the fourth quarter, making it a 49–10 contest. Perry took the ball himself and ran to the right corner of the endzone for a 41-yard touchdown rush. Bahamonde’s PAT was good after the score.

Perry delivered a similar play later in the quarter, running to the right corner of the endzone for a 27-yard touchdown. Bahamonde added another point by kicking the extra point through the uprights with 0:58 left in the game. This would hold as the final score.

The team is now halfway through the regular season, having won each of its first five matchups. Toerper said he likes where his team stands as they enter the second half of the campaign.

“I’m impressed because we bring energy and enthusiasm and we love being around each other,” Toerper said. “The scores [and] the outcomes that we get on game days are a product of our preparation. … I think if we can continue to do that and just make it all about us, then the sky’s the limit for this team.”

The Bombers will return to action at 1 p.m. Oct. 15, as the team will host St. Lawrence University at Butterfield Stadium.