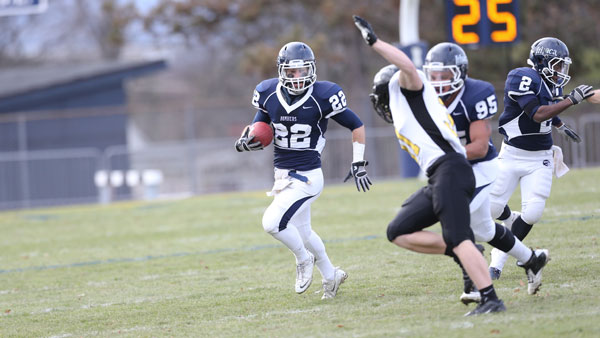 The football team’s 2013 season is over. The final product: a 9–3 overall record, an Empire 8 championship, a fourth-straight loss in the Cortaca Jug, a first-round playoff win and a playoff loss. In the recent context of the program, this season can be seen as a success story given the three middling seasons that preceded it.

That leaves a simple question to examine for the football program in the future: Does the previous season’s success signify the beginning of a return to national prominence for the Blue and Gold?

The Bombers will lose all but one starter on defense and their most productive offensive player, senior tight end Jared Prugar. Though Prugar will graduate, most of the starters on offense will return next year, including junior quarterback Tom Dempsey. Dempsey said he was pleased with the offense’s progression this past season.

For defensive coordinator Mark McDonough, the 10 graduating starters on defense were the core group of players that he has worked with through his three years with the program. McDonough’s defense has improved each year in his tenure, going from allowing almost 20 points per game in 2011 to giving up less than 16 last season. McDonough said the unit’s experience playing together will be the most difficult asset to replace.

“You can’t replace game experience,” he said. “There’s a lot of reps and experience that we’re graduating, but at the same point, we have gotten reps and plays for some of the younger guys.”

McDonough said he viewed the team’s success as the product of good fortune. Conversely, he cited bad fortune as the significant factor behind the average seasons that preceded this one. Of the 20 losses that occurred between 2009 and 2013, 12 of them were by a touchdown or less. The degree to which they are competitive varies.

Junior quarterback Tom Dempsey said he believes nothing separates the Bombers from the elite programs in Division III.

“When you get to the final 32 teams, every one of those teams has something special,” Dempsey said. “Every one of them has the ability to contend at a high level. I think Ithaca, our Bombers, have the chance to be right there with them. I don’t think that [the other programs] have anything that we don’t have.”

The Bombers may not be considered an elite program because of their strength of schedule rating. Their schedule was rated 81st toughest in Division III. By comparison, Wesley College, the team the Blue and Gold lost to on Nov. 30, had the toughest. With SUNY Brockport joining the Empire 8 and Cortaca on their schedule, the Bombers will only play one other non-conference game. The Blue and Gold can schedule a new opponent, as their deals with Moravian College and Union College have each expired.

Head coach Mike Welch said despite this freedom, he will stick to scheduling teams with skill reputations similar to Moravian and Union because he believes their schedule is already tough enough.

“I don’t think we need to strengthen our schedule,” he said.

Welch said he believed that seasons are independent. Dempsey, who will lead an offense that will have most of its starters returning, partially agreed, saying that while the team does not compare itself to previous teams, it does try to draw some lessons from the past.

“I think year in and year out, the goal is to contend nationally with the best teams in the country,” Dempsey said. “The last couple of years, we’ve had a couple of shaky seasons, depending on how you look at it. We had a great year, and we had a lot of promise, a lot of stuff that we can build on.”

Welch plans to stick to his principles in running the football program next season. Along with his faith in the program’s scheduling habits, he said he will treat next year’s team with the same attitude.

“This will be a brand new team,” Welch said. “All those challenges that we will face, we’ll address like we have every year. That’s the key to life, you don’t look back and just take on what’s in front of you.”