Football squad’s 2013 season comes to a close at Wesley 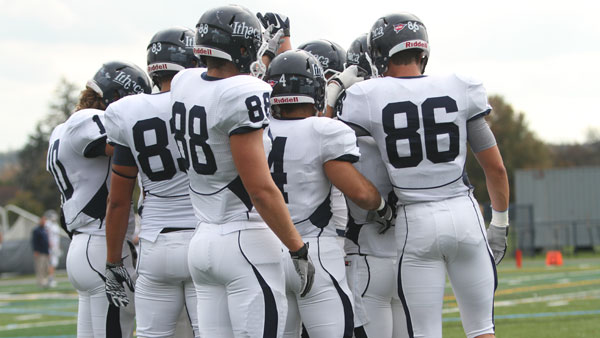 The football team’s season ended with a 23–15 loss to No. 14 Wesley College in the second round of the NCAA tournament Nov. 30 at the Scott D. Miller Stadium in Dover, Del.

The Bombers returned their first two kick returns into Wesley territory. Sophomore wide receiver Josh Oliver returned the opening kickoff to the Wesley 24-yard line. The Bombers were not able to capitalize, but after a Wesley touchdown, junior cornerback Sam Carney returned the subsequent kickoff 91 yards for a touchdown.

After the Bombers took a 7–6 lead, the Wolverines scored 17 unanswered points until the final minutes of the fourth quarter. With 2:44 remaining in the game, junior quarterback Tom Dempsey hit senior wide receiver Vito Boffoli for a 10-yard touchdown and a two-point conversion to bring the Bombers within eight points of a tie.

The Bombers failed to recover the onside kick, and Wesley ran out the rest of the clock to hold onto the victory.

Dempsey was 26–42 with 242 passing yards, a touchdown and an interception. He was also under tremendous pressure, as the Bombers’ offensive line allowed seven sacks. Boffoli had nine catches for 103 yards and a touchdown catch in the fourth quarter.

The Wolverines advance and will face the University of Mount Union Purple Raiders in the NCAA quarterfinals Dec. 7. The time and location are to be determined.

For more details of the game, check out Thursday’s print edition of The Ithacan.