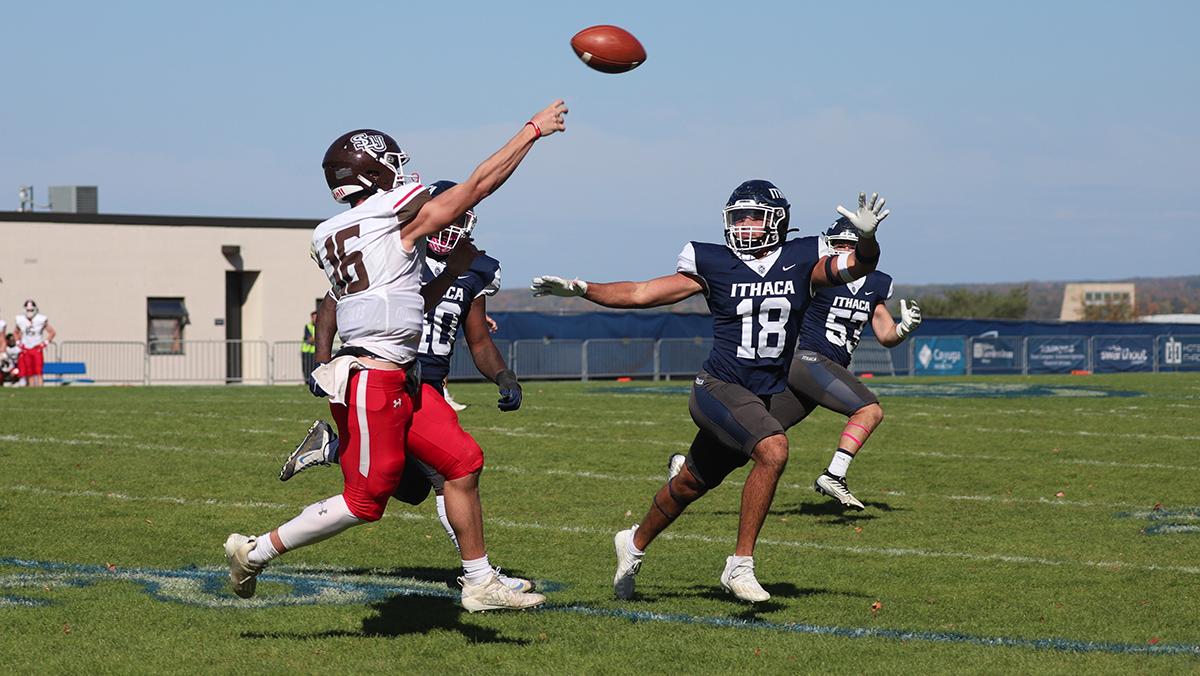 The No. 12 Ithaca College football team defeated the St. Lawrence University Saints 40–0 Oct. 15 at Butterfield Stadium. The victory improves the Bombers’ record to 6–0 on the season.

The Bombers’ offense took a while to get into a rhythm, scoring just nine points in the first half. But the unit came alive in the second half, recording 31 points in the final two quarters. The team posted a total of 280 passing yards and 198 rushing yards, with three offensive players scoring touchdowns. Senior wide receiver Michael Anderson was a key contributor, finding the end zone while leading the team with 122 receiving yards. 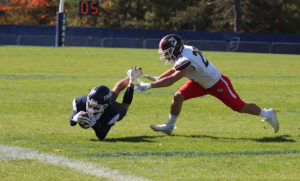 The South Hill squad defense was dominant, posting their second shutout of the season. Ithaca College limited the opposition to just 13 passing yards and 80 rushing yards while holding St. Lawrence to converting only three of its 15 third-down attempts. The Bomber defense also helped put some points on the board, as sophomore defensive back Jake Connolly and junior defensive back Tommy Moran crossed the goal line after intercepting passes.

Head coach Michael Toerper said he felt the defense’s dominance was crucial to keeping the team in the game before its offense got on a roll.

“All it does is speak a testament to our defense and how hard they played and how fast they played,” Toerper said. “So, hats off to them. Without their efforts in the first half, this is a much different result.”

The Bombers opened the scoring in the first quarter, taking a 6–0 lead against the Saints with 6:10 remaining in the frame. Senior quarterback A.J. Wingfield completed a five-yard touchdown pass to senior wide receiver Julien Deumaga in the right corner of the end zone. The college then attempted the two-point conversion, but it was unable to cross the goal line again.

The defenses of both teams then dominated, as neither team scored until there was 4:08 left in the second quarter. The South Hill squad resumed the scoring, extending its lead to 9–0 against St. Lawrence on a 24-yard field goal by senior kicker Nicholas Bahamonde.

The college had an opportunity to tack on some points toward the end of the half, facing second and 10 at the Saints’ 27-yard line. Wingfield’s pass intended for senior wide receiver Billy Tedeschi was intercepted by Saints junior cornerback Grady Harrington as time expired. 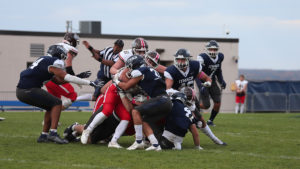 The Bombers’ nine-point lead was their slimmest lead entering halftime this season. The team also turned the ball over with two fumbles in the first half.

The Bombers didn’t waste any time getting on the scoreboard in the third quarter, making it a 16–0 ballgame with 13:41 to play. Wingfield threw a short pass to Anderson, who hustled to the left corner of the end zone for a 59-yard touchdown. Bahamonde then sent his extra point attempt through the uprights. Anderson said he believed scoring early in the third helped set the tone after halftime.

“We made that focus on not getting down on ourselves and just focused on playing complimentary football,” Anderson said. “We came out and scored in two plays on that first drive, and then our defense had a three and out. So, from there … with the defense having two interceptions, it kind of put the game away.”

The Bombers found the end zone again just a few minutes later, taking a 23–0 lead against St. Lawrence with 10:06 remaining in the third quarter. Saints’ sophomore quarterback Daniel Lawther’s third and 24 pass was intercepted by Connolly and returned for a 43-yard touchdown. Bahamonde’s PAT attempt was good. 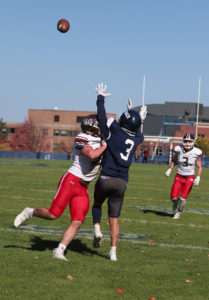 The Bombers added a field goal with 4:52 left in the third, extending their lead to 26–0 on Bahamonde’s successful 31-yard field goal try.

The South Hill squad padded its lead further with 3:52 to play in the third quarter, advancing the score to 33–0. Saints’ senior quarterback Jack Saltus’s third and eight pass was intercepted by Moran and brought to the house for a 43-yard touchdown. Bahamonde sent the extra point through the uprights.

The college’s offensive productivity continued in the fourth quarter, taking a 40–0 lead with 9:10 remaining in the game. Senior quarterback Max Perry threw a six-yard touchdown pass to senior tight end Jon Crowley in the left corner of the end zone. Bahamonde followed this with his fourth PAT of the afternoon.

This would hold as the final score, as neither team put points on the board during the remainder of the contest. The Bombers will return to action at 7 p.m. Oct. 21, as the squad will travel to take on Buffalo State College.