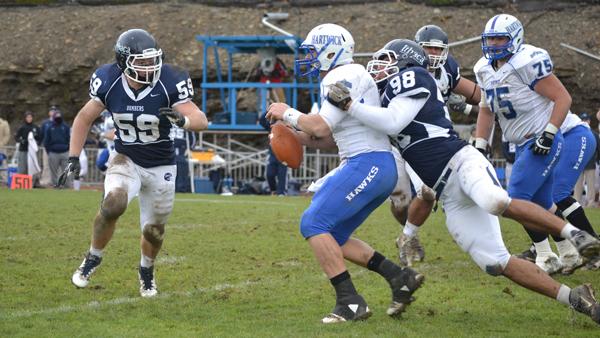 The football team forced seven turnovers in a 28-7 win against Hartwick College on Saturday at Butterfield Stadium.

The Bombers (6–3 overall, 4–3 Empire 8) recorded three interceptions in the first quarter and jumped out to a 14-0 lead before the Hawks (3–6 overall, 0–6 Empire 8) even recorded a single first down. Junior cornerback Brian Garvey tied a school record with three interceptions, including two on consecutive plays in the fourth quarter.

Garvey’s second interception came as junior quarterback Mike Mathews scrambled and threw the ball right to the cornerback’s hands, and he walked into the end zone from three yards out. Interim Head Coach Mark McDonough said the defense’s performance reflected their growth this season.

“You want to be playing your best ball at the end of the year, and I think we’re doing that,” McDonough said.

McDonough said the defense ignored the fact that Mathews was a former member of the Bombers when he played quarterback on the junior varsity level in 2009. Mathews replaced sophomore Andrew Bashford, who threw three interceptions in the first half.

The Bombers were also forced to make a change at quarterback after junior Phil Neumann suffered a shoulder injury in the first quarter. McDonough said he did not have any information on Neumann’s prognosis. Sophomore Tom Dempsey stepped in and was five of nine for 107 yards, throwing for a touchdown and an interception.

Dempsey said he posted an average performance in his three quarters of playing time.

“I’m comfortable — it’s just a matter of warming up and settling in,” Dempsey said. “I had a couple of good plays, a couple of missed reads. We’ll look at the film and clean it up.”

Along with the seven takeaways, the defense held the Hawks to only one third-down conversion in 13 tries. Hartwick rushed for just 57 yards and only had nine first downs. Garvey said the defense was relentless all game.

“We just needed to keep the pedal rolling,” Garvey said. “They were a good offense, they were a talented team, but we needed to keep playing. We knew when Phil went down, the offense was going to battle, but we had their back, and it was just a whole defensive effort.”

The Bombers wrap up their regular season with the annual Cortaca Jug game at SUNY-Cortland next Saturday at noon. McDonough said he is pleased with how the team is coming together in the weeks leading up to Cortaca.

“They’re playing very well, and they’re playing for each other, and I think that shows,” McDonough said. “To get another win before Cortland is fantastic. We have one more win to get, and we’re going to focus on that starting tomorrow morning.”

As previewed in “Zeroing In,” the conditions at Butterfield Stadium were cut up, equal parts mud and grass. Players slipped and had trouble making cuts all day. Sophomore cornerback Mike Vulcano slipped while trying to tackle Hartwick freshman wide receiver Tanner Williams, which allowed Williams to run into the end zone and give the Hawks their lone touchdown of the game.

It was a game full of mistakes, as both teams combined for 10 turnovers. With the Hawks committing seven of those 10 turnovers, it is safe to say this was the difference in the game. However, senior running back Clay Ardoin’s fumble on Hartwick’s one-yard line is a turnover that would have affected the Bombers on any day, because it cost them six potential points.

After missing last week’s game against Salisbury University, senior free safety Josh Liemer returned to action late in the fourth quarter for the Bombers. McDonough said he expects Liemer to be fully available for Cortaca. Junior Skylar Griffenberg has done well while replacing him in the past two weeks and will probably split time with Liemer against SUNY-Cortland.

After an upset loss to the Bombers last week, the 21st-ranked Salisbury Sea Gulls rebounded with an emphatic 63-23 win against Utica College to clinch the Empire 8 automatic qualifier. Senior quarterback Dan Griffin rushed for 137 yards and five touchdowns. The Sea Gulls (7–2 overall, 5–1 Empire 8) rushed for 559 yards as a team. They will travel to Frostburg State knowing a win will officially give them the conference championship.