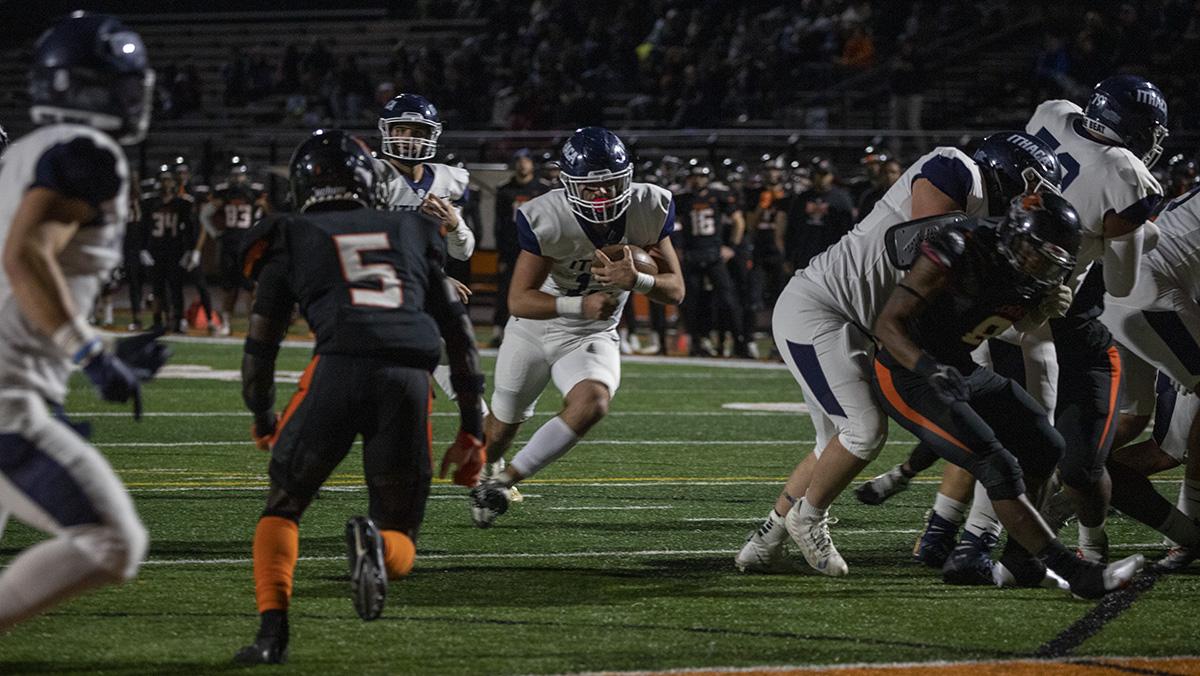 The No. 12 Ithaca College football team defeated the Buffalo State College Bengals 51–10 Oct. 21 at Coyer Field in Buffalo, New York. The victory improves the Bombers’ record to 7–0 on the season.

The Bombers’ offense delivered a commanding performance, recording 266 rushing yards and 183 passing yards. Junior running back Jake Williams was the story of the night, scoring three touchdowns and leading the team with 111 rushing yards. The college had a total of four players find the end zone in the contest. Head coach Michael Toerper said he was impressed by the performance of Williams and the squad’s collective effort.

“I wouldn’t want to tackle him,” Toerper said. “This is the guy that just keeps going and going. … I’m proud of him [and] I’m proud of the way we blocked up front to give him the opportunities to do so.”

The South Hill squad was also productive on the defensive side of the ball, limiting the Bengals to just four rushing yards and 184 passing yards. The Bombers also held the opposition to converting just three of its 11 third down attempts.

The Bombers got on the board after their first drive of the game, taking an early 7–0 lead over the Bengals. Williams ran up the middle for a five-yard touchdown rush with 9:19 left in the quarter. This was followed by senior kicker Nicholas Bahamonde sending an extra point attempt through the uprights.

Buffalo State responded later in the quarter, trimming its deficit to 7–3 with 4:11 remaining in the first frame. Sophomore kicker Nick Sciandra got the team on the scoreboard by converting a 31-yard field goal opportunity.

The South Hill squad then added to its lead, making it a 14–3 ballgame with just 0:20 to play in the first quarter. Williams ran into the middle of the end zone for a four-yard touchdown rush. Bahamonde then tacked on another point with a successful PAT attempt.

The Bombers continued their offensive productivity in the second quarter, advancing their lead to 21–3 against the Bengals. Williams found the end zone for the third time in the game, rushing past the goal line for a one-yard touchdown. Bahamonde’s extra point was good, with 10:16 left in the second. The junior running back said he attributes his success in the contest to his teammates providing him with space to run the ball.

“Our [offensive line] just made the holes, they did what they needed to do,” Williams said. “When I’m not getting touched until the second level, it’s easy for us running backs.”

The South Hill squad put a few more points on the scoreboard with 4:30 to go in the stanza, taking a 24–3 lead. Bahamonde kicked a 22-yard field goal that split the uprights.

The Bombers didn’t let up as the half neared its close, extending their lead to 31–3 over the Bengals with 0:59 remaining. Senior quarterback A.J. Wingfield completed a screen pass to senior wide receiver Michael Anderson, who ran into the left corner of the end zone for a 10-yard touchdown. Bahamonde followed this with a successful PAT.

The college opened the scoring in the second half, taking a 34–3 lead against Buffalo State with 7:37 left in the third quarter. Bahamonde got the South Hill squad back on the scoreboard with a successful 25-yard field goal attempt.

The Bombers kept the offense rolling with 3:41 remaining in the third, extending their lead to 41–3. Senior Bombers’ quarterback Max Perry completed a 21-yard touchdown pass to senior wide receiver Anthony D’Addetta in the left corner of the end zone. Bahamonde then powered the extra point through the uprights.

The South Hill squad resumed the scoring toward the beginning of the fourth quarter, advancing the score to 44–3 with 11:18 to play. Bahamonde continued his solid evening, making his third field goal of the game by converting a 20-yard attempt.

The Bengals did not go down quietly, trimming the Bombers’ lead to 44–10 with 8:24 to go in the game. First-year student quarterback Tom Delgado completed a screen pass to junior wide receiver Tariq Nelson, who ran to the middle of the end zone for a 37-yard touchdown. Sciandra’s PAT try was successful.

The college crossed the goal line once more before the end of the contest, extending its lead to 51–10 against Buffalo State with 1:49 remaining. Senior quarterback Conner Hayes entered the game at quarterback and ran into the middle of the end zone for a 16-yard touchdown. Bahamonde followed this by notching his sixth extra point of the night.

This would hold as the final score, as neither team scored during the remainder of the game. Toerper said he is pleased with how the team has competed so far this season, and he is looking forward to seeing what the team can achieve down the stretch.

“I’m proud of this team, we’re  7–0, where we need to be,” Toerper said. “We’ve got a long road ahead of us, but I can’t wait to get to practice on Sunday [and] I can’t wait for our guys to just keep going through this season the way we’ve gone through it. … We understand what’s in front of us, but nothing’s going to change in our preparation and how much we enjoy being around each other.”

The Bombers will return to action at 1 p.m. Oct. 29, as the team will host Rensselaer Polytechnic Institute at Butterfield Stadium.