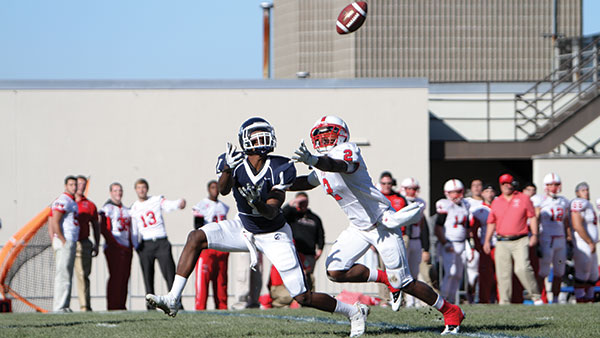 There used to be a time when a second round exit in the NCAA Tournament would be seen as a disappointment for the football team. However, after a lackluster decade, the Bombers enter the 2014 season looking to build on last season’s Round of 16 success and bring back the days in which the Blue and Gold were seen as one of the nation’s best.

The Bombers won the conference and their first playoff game in a decade, ending an eight-year era of inconsistency in which the Blue and Gold made the playoffs four times, but failed to win a single game. Given last season’s successes, there is a sense of optimism for those associated with the program, as the South Hill squad tries to make consecutive playoff appearances for the first time since 2008.

However, head coach Mike Welch said his chief concern this season is replacing graduating players on a Bomber defense that allowed fewer than 16 points per game last year.

“We’ve got new faces, especially in our defense,” Welch said. “We have new faces across the board, and we’re looking for those people to develop into players that we need to win championships … Every player has high expectations for himself, and we expect a lot out of them as well. It doesn’t matter if he was here last year. It’s Ithaca; you step up and get the job done.”

Senior linebacker Chris Williams and senior defensive lineman Joe Ricotta are the only defensive starters from last season to return. Despite the squad turnover, the Bomber defense has been impressive in training camp dominating the more-experienced offense in full-team drills. Though the Bombers are still more than a week away from their first regular season game against Union College, the defense’s early form is giving veterans like Williams a reason to be excited about the upcoming season.

“Everyone has been waiting their turn to get their shot to play,” Williams said. “Everyone is stepping up to the task as of right now, but we can’t be happy with that. We have to keep improving every single day, and as long as we do that, we’re going to be good.”

Overall, the Blue and Gold will not be as inexperienced as they initially appear to be. Ten defensive players who played in the Bombers’ second-round loss to Wesley College are returning, including senior cornerback Sam Carney, who was named to the Preseason All-American Second Team by D3football.com as a return specialist. Carney is expected to contribute on both sides of the ball. Carney said he is well-prepared for the added workload and is eager to pick up where last year’s graduates left off.

“Ricotta, [Chris Williams] and me (sic) have been on the field, and we’ve played behind the [graduate student linebacker] Will Carters of the world,” Carney said. “We understand what it takes, and we have a little bit of them with us, and we’re just carrying that over and get this team ready to go.”

Personnel-wise, there is slightly more certainty on the offensive side of the ball, with six starters coming back. Most notably is senior quarterback Tom Dempsey, who will lead the unit in his first full season as the starter. Dempsey replaced an injured Phil Neumann ’14 in the Bombers’ loss to Hartwick College on Oct. 15, 2013, and proceeded to win his first five games as a starter last season, including wins over St. John Fisher College and the conference-clinching victory at Salisbury University. Dempsey said he is confident that he will be able to build on that experience.

“I got the opportunity to play a lot of games last season, and it was great,” Dempsey said. “I built some relationships with the guys on the field that are coming back, and you just kind of see things easier when you’re out there on the field.”

Dempsey added that while he is preparing for his first full season as a starter in the same manner he has prepared for the previous three seasons, he spent this past offseason refining his passing technique and his footwork in order to become a more accurate passer outside of the pocket. Two of his main targets will return, as seniors Vito Boffoli and Joel Lynch are expected to be the starting wideouts for the second consecutive season. With that continuity, Dempsey said he is expecting more from himself and the offense.

“We’ve made a lot of good strides last year and still left a ton of room for improvement,” Dempsey said. “I think we can really jump it up a couple of notches and be the spark for this team. We’re ready to go, and we’re looking to do big things this year, so I’m excited about it.”