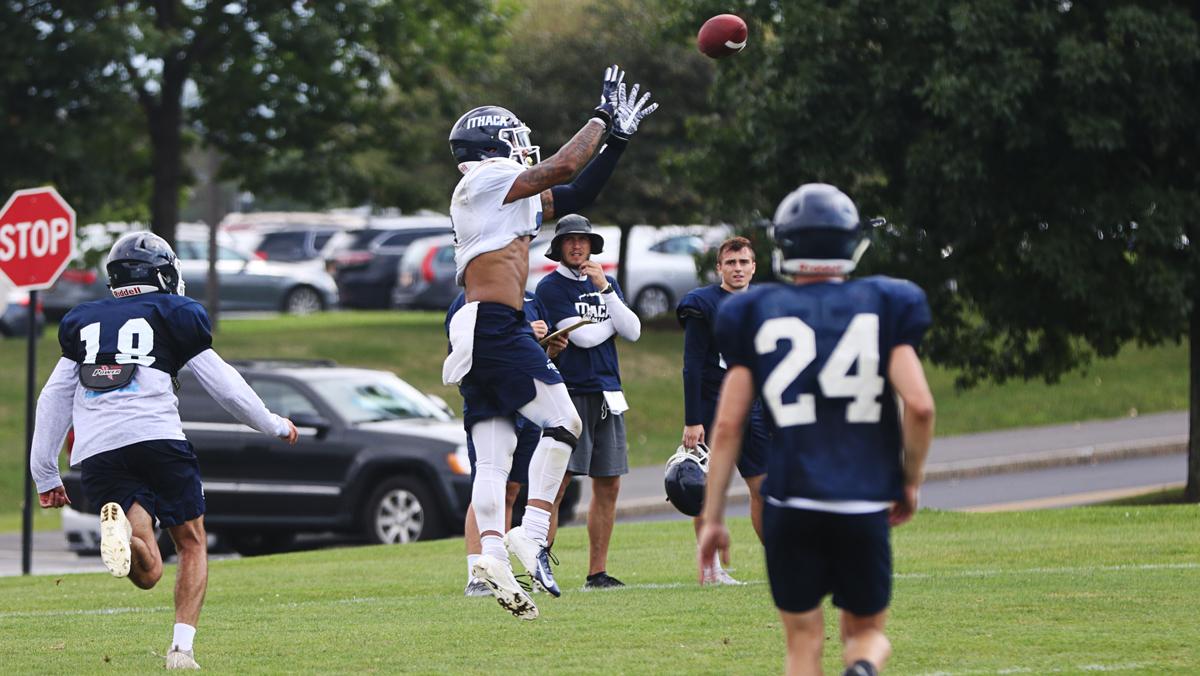 Abbey London/The Ithacan
Senior running back Isaiah D'Haiti scored eight touchdowns and had 253 rushing yards last season. The Bombers will look to him to finish in the red zone.
By Jack Murray — Staff Writer
Published: August 29, 2019

An 8–3 record and a bowl game appearance could be considered a banner year for many Division III football programs across the country. For the Ithaca College football team, it was considered a letdown.

The 2018 Bombers held a strong defense and had moments of success, including sealing their second consecutive Cortaca Jug over SUNY Cortland. The monumental Cortaca win gave them a chance at an at-large bid for the NCAA tournament.

However, the selection committee decided that the South Hill squad had not done enough to qualify. Senior captain Will Gladney believes the core of the team is doing all that it can to avoid this outcome for the 2019 season.

“We look at last season like we underachieved,” Gladney said. “A lot of the guys who have come back have worked harder than ever before, and that made us more hungry for this upcoming season.” 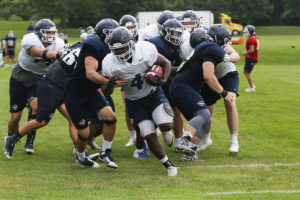 Senior running back Isaiah D’Haiti is one of many strong offensive returners for the football team this season.

Gladney, who was named the Liberty League Offensive Player of the Year and was named to the D3football.com All-East Region second team, is the highlight of an offensive unit that is returning most of its starters from the previous season. Joining Gladney on the receiving corps is junior Andrew Vito, who had 691 receiving yards and four touchdowns on the season and was named to the Liberty League Second Team All-Conference.

The Bombers have two senior running backs who both logged significant time last season. Kendall Anderson led the team with 647 rushing yards, added five touchdowns and was named Liberty League First Team All-Conference. Isaiah D’Haiti was also a force in the red zone, scoring eight touchdowns and 253 rushing yards. D’Haiti said that he and Anderson are planning on setting a precedent for the younger running backs on the team.

D’Haiti said that sophomore AJ Clifford stood out to him during spring practices and that he believes Clifford could be primed for a breakout year.

“One member of the running back team who has stood out is AJ,” D’Haiti said. “AJ is fast and played a couple of games for us last season. He is going to be a great asset for our offense, and I feel that he will do a great job.”

Also returning is junior quarterback Wahid Nabi. Nabi threw for 2,249 yards with 16 touchdowns during his second season as a starter. He was also named Liberty League Second-Team All-Conference. The Bombers also acquired senior quarterback Joe Germinerio, who is a transfer from the College at Brockport. Germinerio was named an All-American by D3football.com in 2017 and was a finalist for the Gagliardi Trophy in 2018.

Defensively, the Bombers will be losing much of their outstanding 2018 unit, including Pat Minogue ’19, who was the 2018 Liberty League Defensive Player of the Year. Still, the Bombers will be returning senior linebacker Nick Garone, who was named Liberty League All-Conference First Team. D’Haiti said sophomore linebacker Miles Haynes could be one player to benefit from more playing time.

Head coach Dan Swanstrom is entering his third season as head coach for the Bombers, and he said that while many players have had success in this program, nobody’s position is completely secure, especially on offense. 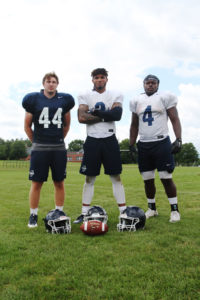 The annual Cortaca Jug will be played in MetLife Stadium in East Rutherford, New Jersey this year.

“They have a lot to prove to themselves, and certainly to the coaching staff, that they are capable of scoring more points than they did last year,” Swanstrom said. “We have a lot of work to do, so I’m hoping that through competition and position battles, we will figure it out. Nothing is safe within the program at this point, and the position we are in really feels like everything is wide open.”

Swanstrom said he hopes the increased emphasis on competition will help to bring out the best in every player.

“Competition is the root of everything — not just within the football program, but everything with being successful,” Swanstrom said. “That is how you get to be the best. It’s just that simple. It is the root of all success stories.”

While no spot is necessarily safe, Swanstrom said, he is leaning on his team’s leaders to take pride in the culture of the football program at the college and promote these values to the new additions to the team.

“We have a core group of seniors coming back, and how quickly they can get the young players assimilated to the program and built into the culture and get them playing the way they are supposed to play as an Ithaca Bomber is everything,” Swanstrom said. “There’s only so much I can do, and if it comes from within the team, then that is the best way we will be able to go to work.”

Swanstrom said that every conference game will be vital toward the team’s chance at the playoffs since one loss within the league determines who goes to the NCAA tournament.

One notable matchup will be Nov. 9 against No. 19 Rensselaer Polytechnic Institute, which was the 2018 Liberty League Champion. The following week is the 61st Cortaca Jug against SUNY Cortland; the game is being played at MetLife Stadium in East Rutherford, New Jersey.

Gladney said that while these games carry a significant amount of importance, the team is looking at each week as a must-win.

“Coach Swanstrom and us as captains preach to just focus week by week,” Gladney said. “We don’t really look forward to the game that is even two weeks ahead of time. Every week is a different week, and we need to go 1–0 each week.”

The Bombers will kick off their fall season at 1 p.m. Saturday, Sept. 7 as they take on Saint Vincent College in Latrobe, Pennsylvania.