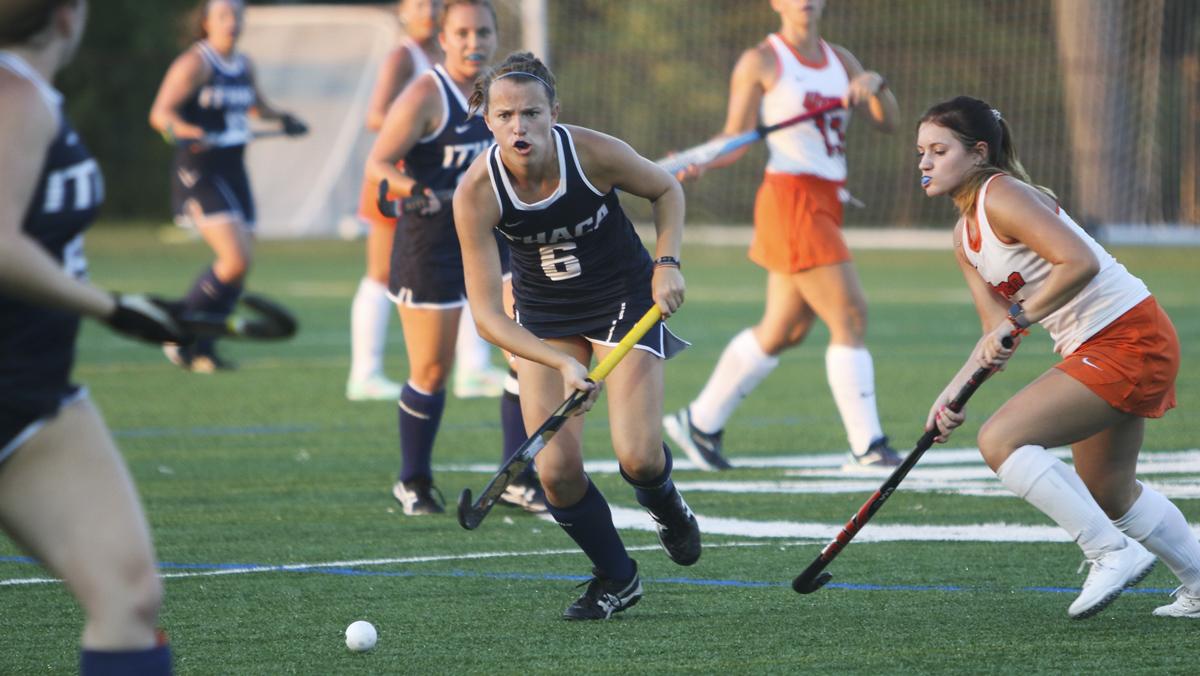 Meg Dowd ’19 is following a long line of Ithaca College women to work with Women Leaders in College Sports, formerly known as the National Association of Collegiate Women Athletics Administrators. The former Bomber field hockey player was hired as the coordinator of marketing and digital media for the organization after joining as a marketing intern in September 2019.

Women Leaders in College Sports is a leadership organization that connects women working in college athletics with other females in sports. The organization offers educational programs, networking events and other resources for sports administrators, coaches and athletes.

In her senior season, Dowd served as a captain of the field hockey team and finished third on the team in goals and tied for second in assists. Throughout her collegiate career, she was named to the Empire 8 President’s List, National Field Hockey Coaches Association (NFHCA) Academic Squad, NFHCA Scholar of Distinction and Liberty League All-Academic teams.

Sports editor Arla Davis sat down with Dowd to discuss her role with Women Leaders in College Sports, how her experience as an athlete prepared her for her profession and why organizations are necessary for the advancement of women’s athletics.

Arla Davis: What does your role with Women Leaders in College Sports as the coordinator of marketing and digital media look like?

Meg Dowd: I do a lot of our front-facing stuff, so anything digital with emails, social media. We also run a podcast called Women Leaders Podcast that’s with our CEO, Patti Philips. Right now, my focus is our virtual convention, so I’m creating a lot of slides and graphics and then also working with every other team member to make sure that all of their stuff is on brand. My biggest role is making sure that our brand is presented how we want to be represented and how others perceive us.

AD: Can you tell me a little bit about how you got involved with it and your experience getting to the full–time position you’re at now?

MD: I took the summer off after graduating and didn’t start my job search until pretty late in the summer. I was really fortunate to have Erienne Roberts, [associate director of intercollegiate athletics and senior woman administrator], send the job over my way. She’s super involved in Women Leaders and thought it was the perfect place for me. [Maureen Ordnung, field hockey assistant coach,] also sent me the job, so everyone was sort of looking out for me, and I’m really thankful for that. … I started two weeks before our national convention last year, which was our 40th anniversary. We celebrated all of our past presidents, one of whom is Susan Bassett, [director of the Office of Intercollegiate Athletics]. [The college] is super connected to Women Leaders, and the more and more that I am meeting people and connecting with women in the industry, I have learned the Ithaca network is so strong, and everyone is looking out for one another. That’s definitely a big reason why I’m here and why I love being here.

AD: How did your experience being a student–athlete at Ithaca prepare you for your new job?

MD: My office is a team of 14 women, so it is just like being on a team. I really don’t think I will find this sort of team setting anywhere else. It is so unique to Women Leaders, and it’s just like being on the field hockey field. The dynamic is very similar, and the leadership is very similar. We lead like coaches and captains and teammates, so it’s translated in so many ways.

AD: Why do you think organizations like Women Leaders in College Sports are important to female athletics?

MD: People can talk the talk, but, until they walk the walk, things aren’t going to change. We are really working with women to prepare themselves to be the best leaders they can be. We always say, “Lift as you rise,” and that’s probably the biggest thing — encouraging women to build each other up and help each other when they can. The other part is our male champions and working with them and encouraging them to get men in the athletics industry to help women along the way because we are behind. Nothing is quite equal yet. We want that, and we deserve it. There are so many qualified women in really important roles, and there are so many qualified women who deserve really important and high-up roles. Another part is just making each other better. I’d really say that since I started to work here, I’ve become a better person, and a big part of it is just culture and learning from each other. We really do lift as we rise and help each other out along the way.

AD: What advice do you have for Ithaca College students who are interested in working in the field that you’re working in?

MD: Take advantage of all the opportunities that Ithaca has because everyone knows someone, and they will help you out along the way. The thing with Ithaca that I always say is it has such a strong network anywhere. You just need to know how to use it. It’s as simple as sending a quick email and just saying hello.

After an underwhelming slate of games from the men’s final, Danielle Allentuck suggests people turn their focus to the women’s game.