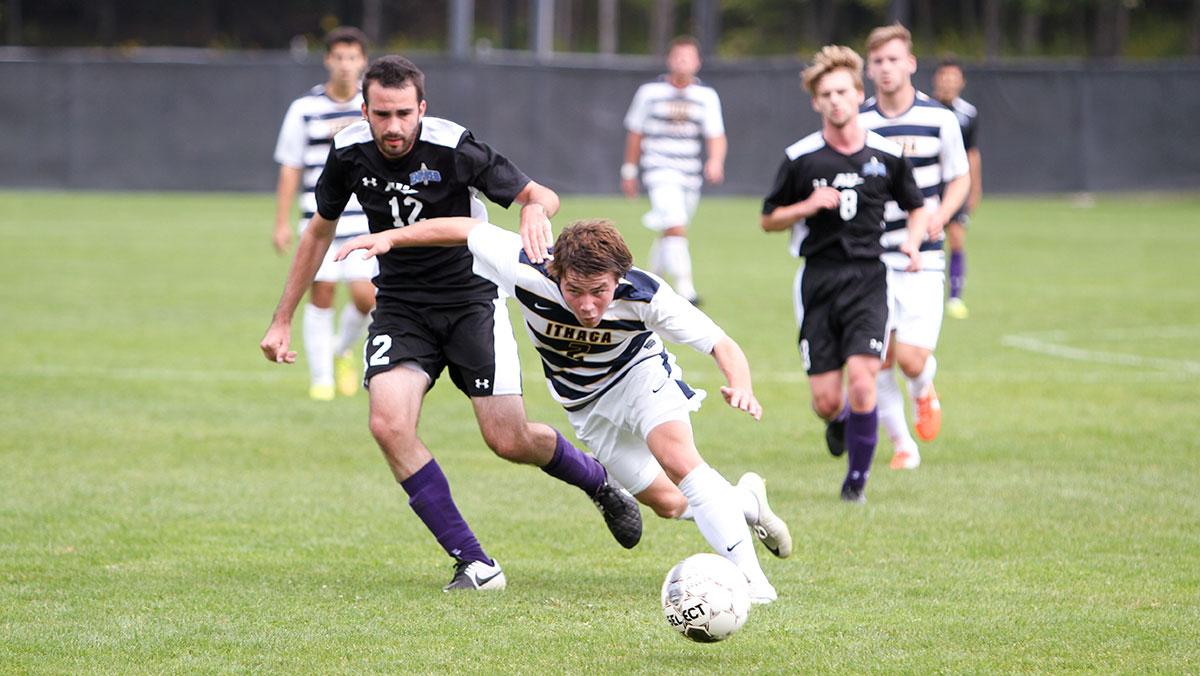 In the men’s soccer team’s 3–1 win over Elmira College on Oct. 4, senior forward and back Casey Williamson opened up the scoring for the Bombers with a fifth-minute goal. In the 50th minute, sophomore forward Sean Forward hammered home a goal of his own to extend the team’s lead. In what has been a consistent theme with the Bombers this season, Williamson and Forward have generated the team’s offense.

This combination has been steadily improving in its first full season starting up front for the Blue and Gold.  Williamson and Forward said they both believe they have shown the chemistry that is a necessity for a strong attack.

“We kind of work well off each other,” Williamson said. “A lot of times it’s me finding him on a through ball or him finding me.”

Forward echoed this sentiment and said he believes the two have created a strong dynamic up front.

“Casey works hard, and we have a lot of chemistry,” Forward said.

The two took different paths to earn the spots they play in now. While Forward started last season and was an All-Empire 8 First Team selection, Williamson spent the majority of his time playing in the back line in his first three years with the team. As a result, it took a little while for the two to click.

But the chemistry has improved as the season has progressed, head coach Andy Byrne said.

“Casey is a player that plays a lot of positions,” Byrne said. “He’s starting to get comfortable as a wide midfielder working with Sean.”

With Williamson playing on the wing and Forward playing forward, a significant amount of activity goes on between the two. Byrne said their complementary skills have made the Bombers a successful pairing.

“Sean is a very hardworking player,” Byrne said. “He covers a lot of ground and finishes pretty well. Casey is a good dribbler, and he has the ability to beat a defender.”

With Williamson carrying the ball and drawing the defense, it opens up more space for Forward to create scoring opportunities. Byrne said this has been one of the biggest positive changes between the pairing since last year.

“Sean’s understanding of the game and of where to go without the ball [has improved],” Byrne said. “What he does with the ball has always been good. Now he’s improving without it.”

Their similarities have also helped them offensively. Both are smaller players, but a disadvantage in height has resulted in development in other areas. Williamson said controlling the ball and finishing in difficult spots has been one of the best examples of this.

“We’re not the biggest guys, so we have to be good in tight spaces,” Williamson said. “I think for both of us, that’s been one of our biggest strengths this year.”

This has also led to both players shouldering the offensive load. Forward has picked up where he left off last year while tied for the lead on the team with four goals alongside Williamson, who has surpassed his total from last year with three regular-season games remaining.

However, there are still areas in which both players could stand to improve, Byrne said. For Forward, Byrne said becoming a consistent finisher is the most important thing.

“He’s had some opportunities that we would like to have back,” Byrne said. “He could have a few more goals if his finishing improved.”

For Williamson, Byrne said staying healthy has been the biggest concern so far this year.

“Casey has had injury problems so probably for him fitness and getting healthy,” Byrne said.

Looking ahead, the concerns for the team lie in being more consistent with finishing, Williamson said.  He believes the team expends a large amount of energy in the buildup to a goal, and coming up empty-handed has been an issue.

“We want to be more clinical in the final third,” Williamson said. “Each game we’ve improved in terms of our quality of play and work rate of play. We want to continue to improve on finishing our chances when we work so hard to create them.”