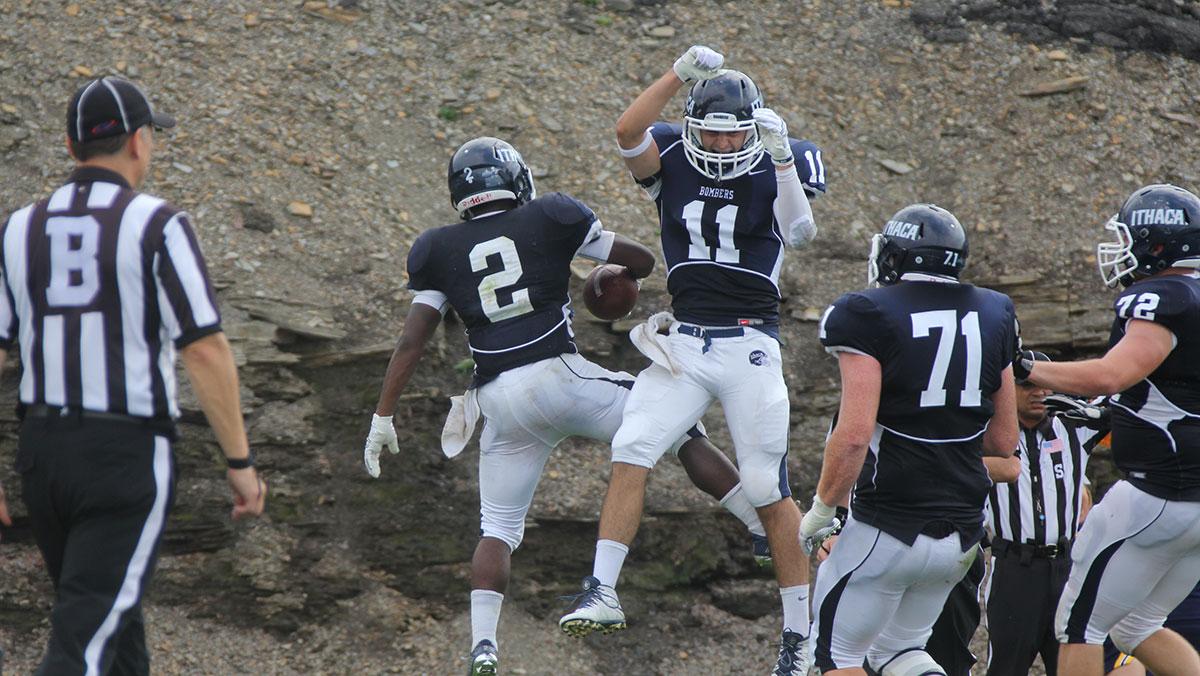 The No. 20–ranked Ithaca College football team will look to stay undefeated this weekend as the Bombers host the 3–0 Alfred University Saxons at 1 p.m. Sept. 26 at Butterfield Stadium.

With the Blue and Gold’s impressive defensive bout against the nationally ranked Hobart College, the Bombers have climbed to No. 20 in the D3football.com Top 25 poll. In the Sept. 19 game against Hobart, the Bombers’ defense came up with six turnovers. One of those turnovers was recovered in the end zone by senior captain Logan Murphy for a touchdown that put the Bombers ahead 7–0. From there on out, it was sophomore linebacker Dan Loizos who dominated the game as he had one forced fumble and two recovered fumbles against the Statesmen. Loizos now has 19 tackles in the first two games this season.

In the game against Hobart College, Wolfgang Shafer made his first home start for the Bombers. He was a solid 13–24 with 163 yards through the air, including a 53-yard bomb to senior tight end Kyle Hastings, the longest pass of the game for either team. The quarterback also connected with senior specialist Josh Oliver for an 18-yard touchdown pass midway through the third quarter against Hobart.

Shafer is looking to pad onto his stats through two games thus far this season. The junior had three touchdown passes and over 400 yards through the air in the first two games against Union College and Hobart, including a 265-yard passing game at Union three weeks ago. The Bombers’ offense looks to be a force to be reckoned with by averaging 31 points between the two games.

Head coach Mike Welch said he knows his team was unable to capitalize on the turnovers against Hobart, but he was pleased with the play of his team.

“We just had to hang in there and we hit some big plays,” Welch said. “That’s the thing, when you get a big play, it changes the field position.”

The aforementioned Bomber defense has been the key to the early 2–0 start and slotting them into the No. 20 spot in the country. The Bombers’ defense is allowing an average of 157.5 passing yards and 65 rushing yards per game in 2015. The defense has pressed its opponents into an unprecedented seven turnovers through two games.

Last weekend’s game against Hobart was a sloppy game overall due to the weather, but it led to the stout Bombers defense knocking quarterback Thomas Sydeski out of the game at halftime, due to his lack of protection of the ball. The defense picked him off three times and recovered one of his fumbles as he was starting at quarterback for the first time in his career.

Murphy, the man behind some of Sydeski’s pain, said he was proud of his defense.

“I just love the fact that when Hobart was about to get the ball over, we put on the hard hats and went to work,” Murphy said.

Bring on the Saxons

In 2014, it was the Bombers two early touchdowns in the second half that led them to a 17–6 victory over Alfred at Yunevich Stadium. The Saxons led 6–0 at halftime last year, however, the Blue and Gold had racked up more yards. In the second half, it was the Bombers who outscored the Saxons 17–0, and much like this past week against Hobart, the defense was the key to the victory. The defense and special teams forced three turnovers, which gave them the spark to succeed in the passing game. At the time, it was Tom Dempsey who was under center for the Bombers, and went 20–27 through the air for 219 yards.

The 2015 Bombers’ team is young and healthy, looking to start 3–0 on the season. The key to the game could be how well the defense can play in back-to-back games after playing Hobart. The Bombers are looking to knock off the much-improved Saxons heading into the Empire 8 conference matchup.