Four Downs: Bombers look to bounce back against Frostburg State 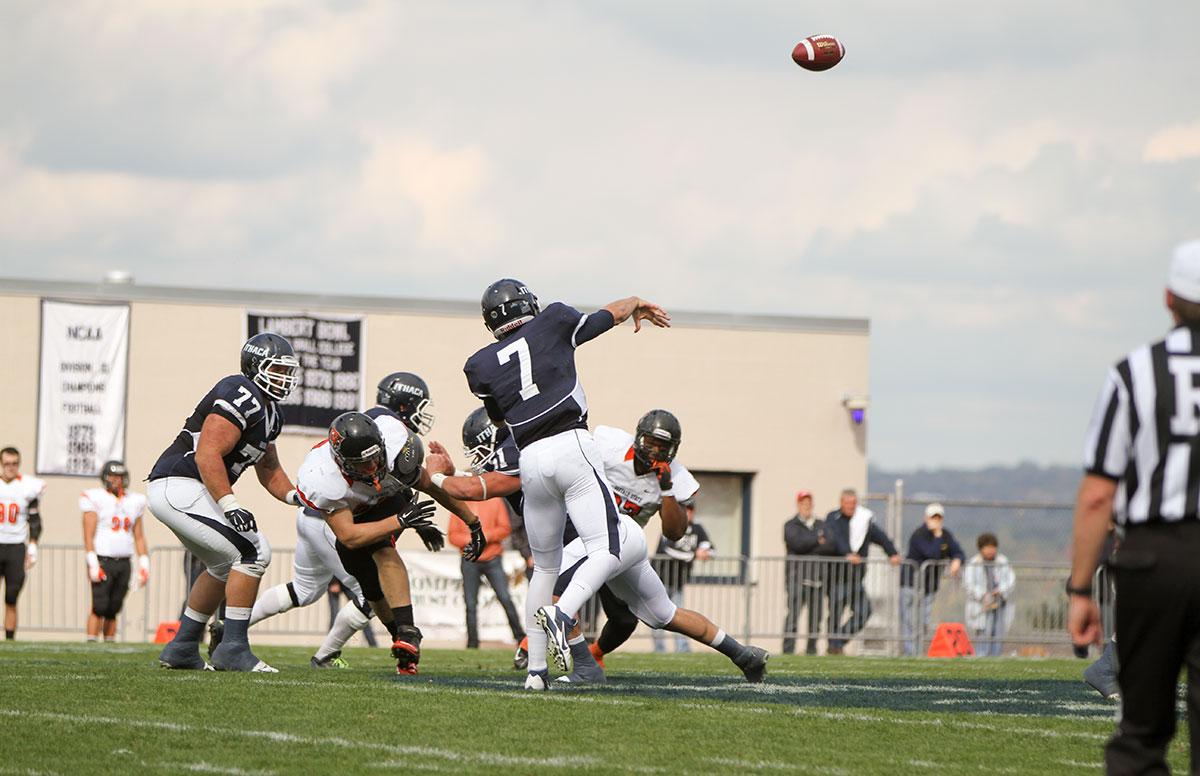 The football team (4–1, 3–1) looks to bounce back from its first loss of the season against the Frostburg State Bobcats this Saturday in Frostburg, Maryland.

Bent, But Not Broken

“Bend, don’t break,” has been the motto of this stingy Bomber defense for a multitude of years. However, after limiting three Empire 8 opponents to just 23 points combined, the Blue and Gold might have bent a little too far against the Buffalo State Bengals. The Bengals, who have the No. 2 scoring offense in the Empire 8, scored 38 points and generated six turnovers, including two interceptions returned for touchdowns en route to a 38–27 win against the South Hill squad on Oct. 11 at Butterfield Stadium.

Granted, the loss was only the first of the season for the Blue and Gold, but the remaining teams on the schedule include two current nationally ranked Empire 8 opponents as well as SUNY Cortland, who the Bombers haven’t defeated since 2010.

Alliteration is fun, and so is playing the Frostburg State Bobcats if you’re an Empire 8 opponent. After winning the first two games of the 2014 season, the Bobcats have gone on to lose their next four games against Empire 8 teams. Overall, the Bobcats have lost 16 consecutive Empire 8 conference games dating back to the 2012 season.

Senior quarterback Tom Dempsey is looking to bounce back against the Bobcats after a forgettable week five showing with three interceptions and a fumble on the opponent’s 1-yard line. The captain said he is remaining positive and taking a more optimistic approach heading into this week.

“We saw a lot of good things on the tape that we can take away and learn from,” Dempsey said. “The best thing to do is put last week behind us and move on to the next game.”

Wake Up the Sleeping Giant

DeLane Fitzgerald was named the new head coach of the Frostburg State Bobcats following a national search that took place in January. Fitzgerald will be the 13th head coach in the 54 years that Frostburg has had a football program.

“I’m ecstatic to be here and I can’t wait to get to work,” Fitzgerald told the Frostburg State athletics website. “I’ve always thought, throughout my career, that the Frostburg State University football program is a sleeping giant. We will build a successful program on discipline and competitiveness and [the coaching staff and team] will finish everything we start.”

However, this dormant giant still seems to be deep in slumber. Halfway through the season, Frostburg ranks dead last in scoring and total offense as well as in the bottom third for total defense in the Empire 8.

Race to the Top

Only the No. 1 seed in the Empire 8 receives a bid to the playoffs at the conclusion of every football season. Midway through, the Buffalo State Bengals, Ithaca College and St. John Fisher College all have identical records and are atop the leaderboard.

While Buffalo State is on its bye week, the Bombers and St. John Fisher will both seek to win their respective games and potentially claim sole possession of the top spot. The Cardinals will arguably have a tougher challenge this week, facing Utica College and its senior wide receiver Anthony Acevedo. In his last outing, Acevedo recorded eight catches for 178 receiving yards and two touchdowns in a loss to Salisbury University.

Other Empire 8 matchups include SUNY Brockport at Alfred University and Hartwick College at Salisbury.