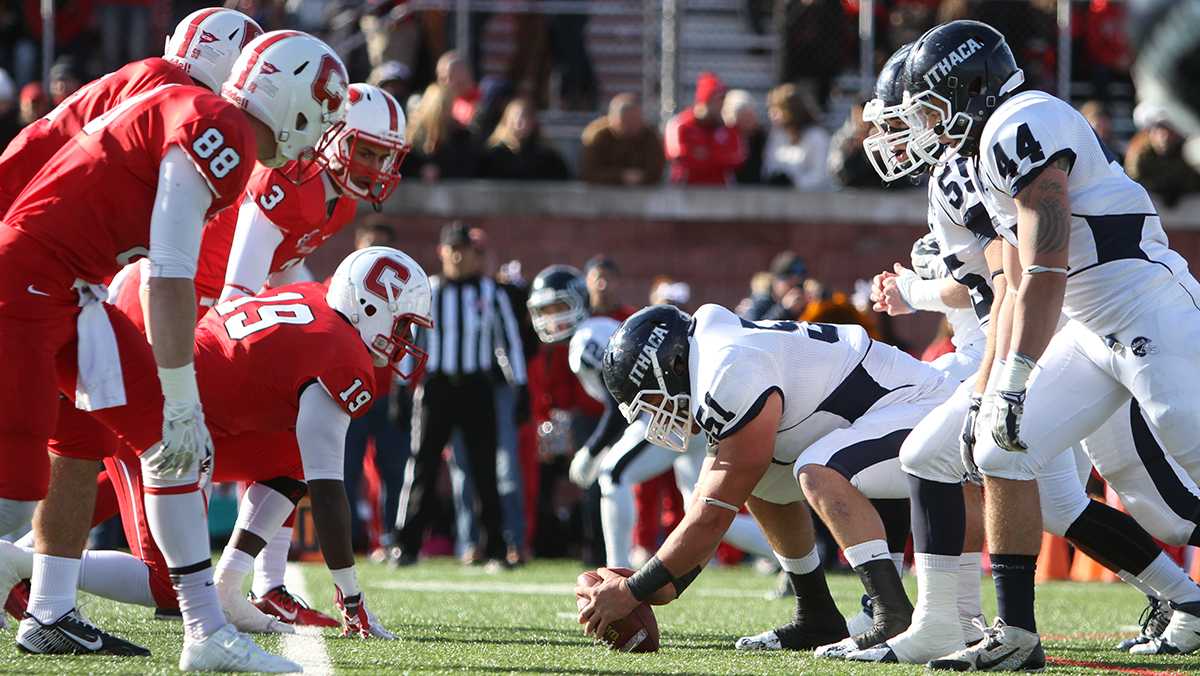 Bombers Continue To Streak In The Wrong Direction

The 2015 season thus far for the Blue and Gold has been a historic one, albeit the history has not favored the college. This will only be the second time since 1969 that the Bombers will not finish the season with a winning record. The Bombers last sub-.500 season came in 2011 when the squad finished with an overall record of 4–6.

The team’s 2–5 record in the Empire 8 conference is tied for the worst since 2002. The Bombers also finished 2–5 in conference play in 2011. Since this is SUNY Cortland’s first year in the conference, a loss in Saturday’s game would break that tie with the 2011 team.

The Bombers’ current four-game losing streak is also an eyebrow-raiser. The skid marks the first time since 1957 that the college has suffered such a winless drought.

Even as the game nears, the Bombers are once again on the wrong side of history. Heading into the contest, the college is one loss away from enduring the longest losing streak against their archrivals. The South Hill squad has squandered last five Cortaca Jug games against the Red Dragons. The last time the college owned a five-game skid against Cortland can be traced back to the years 1955 to 1959, the year of the first Cortaca Jug game.

The Bombers will need to establish some sort of rhythm early on if they want to hang around with the Red Dragons. The Bombers have failed to score a touchdown in their past two games.

The main source for Cortland’s prolific scoring offense has come from the soft paws of the offense’s top three receivers. Junior wide receiver Jon Mannix leads the charge, catching 39 pass attempts for 824 yards and averaging 91.6 receiving yards per contest. Mannix is Cortland’s go-to red zone target, as his nine touchdown receptions are tied for No. 39 in the country.

Mannix’s supporting cast includes sophomore wide out Jake Smith and junior wide receiver Nick Wagner have combined for 73 catches for a total of 1,118 yards and nine touchdowns. The challenge for the Bombers’ secondary will be to contain all three. If one member of the trio is being capped, the next one could easily step up and have a huge performance.

On the flip side, the Bombers’ paltry passing attack will be lined up against a generous secondary of the Red Dragons. Cortland yields the most passing yards per game at 289.8 yards. The Bombers should look to be aggressive and take chances airing the ball out down the field. The Red Dragons secondary has the propensity to allow the big play in the passing game as they have warranted at least one pass attempted of 30 yards or more in the past two weeks.

The defensive unit woke up from its hibernation last weekend and looked like its old self after holding SUNY Buffalo State to a single score last week. The defense looked gassed over the past couple weeks, partly due to the fact that the offense was going three-and-out on just about every possession.

The key for the Bombers’ defense for this year’s game is to get after the quarterback. Senior defensive lineman Logan Murphy was absent in last season’s Cortaca Jug game due to injury, but is active for Saturday’s game. Murphy has been a catalyst for the college’s defensive front with his team-high seven total sacks on the season thus far.

The squad will look to take advantage of a soft Cortland offensive line that has allowed 39 sacks on the season. Even if they are not able to sack quarterback Steven Ferreira, the Bombers’ defensive linemen need to apply some pressure to the Cortland quarterback in order to rattle his cage and force him to make errant throws.

This One’s For The Seniors

This past Thursday marked the final practice in preparation for the annual Cortaca Jug game, in addition to the final football practice of the collegiate athletic careers of the senior players.

For the senior Bombers, this weekend’s skirmish will be their last bout on their home turf. Their final time walking out of the locker rooms, making their way around the track to touch for good luck before charging onto the field as their names are called, their cleats digging into the earth of Butterfield Stadium and kicking up the sweet green blades of grass behind them. This is their swan song, their last hurrah.

However, there is still one last hurdle for the class of 2016: This class has never been able to bring home the Jug during their time on the team. Unfortunately for some seniors such as tight end Kyle Hastings and wide receiver Josh Oliver, they will not be able to make their direct impact on the outcome of this weekend’s game in order to make their dream a reality.