Four Downs: Football team looks to be predators versus Hawks 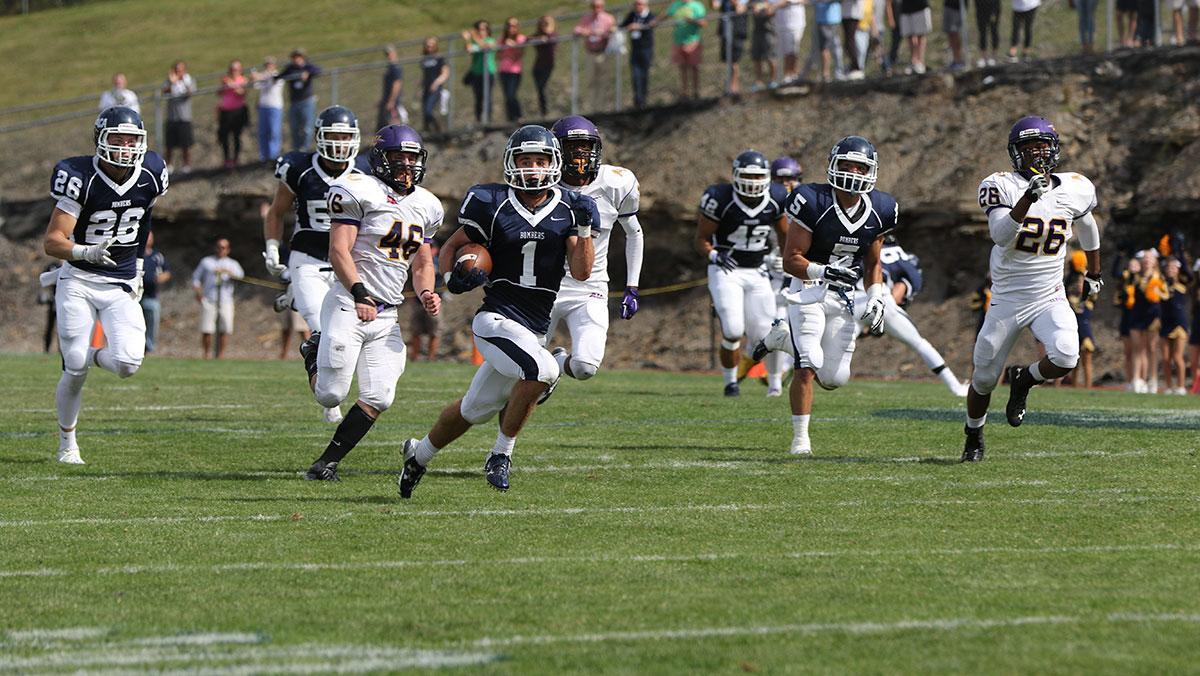 The Ithaca College football team will face off against the Hartwick College Hawks at 2 p.m. Oct. 10 in Oneonta, New York.

The Blue and Gold are coming off of a heartbreaking 30–27 overtime loss against Utica College on Oct. 3 as it was a tale of two halves. Going into halftime, the Bombers’ trailed the Pioneers 10–0. Both defenses played a tremendous first half, but it was Utica that was able to gain the advantage. It was early in the third quarter when the Pioneers put up two quick touchdowns and put the home team ahead 24–0.

After the latter touchdown, the Bombers put up 24 quick points to send the game to an extra period, and on their first possession, Max Rottenecker connected on a 30-yard field goal.

On the assuming possession, the Pioneers scored on a game-ending touchdown to win. It was the Bombers’ first loss of 2015, and just the team’s second loss to the Pioneers in school history.

The Bombers defense gave up a season-high 30 points in the loss to Utica. Heading into the matchup, Utica was 2–2 on the season.

Utica quarterback Teddy VanGalen picked apart the Bombers defense as he was a co-recipient of the Empire 8 Athlete of the Week. VanGalen went 18-of-30 through the air for 254 yards, and has now thrown over 250 yards in all five games for the Pioneers this season.

For the Blue and Gold, giving up 30 points was the most that has been allowed all year long.

The Bombers defense gives up an average of 294 yards a game, which is the best in the Empire 8 Conference. On the flip side, the offense is only averaging 316.6 yards per game, which is second to last in the conference.

When heading to Oneonta to play Hartwick, defense will be at a premium as the Hawks have the best established offense in conference play.

The Bombers defense will need to be on its ‘A’ game this Saturday.

Offense Looking to Start off Hot

One of the Bombers’ struggles this season has been getting the offense performing early in the game. Against Utica, it wasn’t until the second half when junior quarterback Wolfgang Shafer marched the offense down the field to score touchdowns.

In order for the Blue and Gold to make it to the Division III playoffs and be competitive, they will need to outperform the opposition’s defense. Though Shafer had a rough start against Utica, he threw for 298 yards including three touchdowns, which are both career-highs.

In last year’s matchup against Hartwick, the Bombers steamrolled right over the Hawks winning 42–7. Both teams have made vast improvements since then, and this is a crucial matchup between the two games. Hartwick is 2–2 on the year, but 0–2 in conference play losing to SUNY Brockport and SUNY Cortland.

This is a must-win game for the Hawks because if they fall victim to the Bombers’, their season is might be for a lost cause, starting 0–3 in conference play.

However, the same could be said for the Bombers. If the offense struggles to put up points against the statistically least efficient defense in the league, it may cause problems for them. The Bombers need this win in order to stay in the upper half of the Empire 8 Conference.

When junior defensive back Skyler Kauf intercepted a pass Oct. 3, little did he know it would get the recognition that it received. His interception off VanGalen wasn’t the typical interception.

In the second quarter with 12:27 left to play, the cornerback made what could possibly be the play of the year. VanGalen threw a pass to senior wide receiver, Alex DeRusso, and it was caught then juggled when DeRusso hit the ground. Somehow, the ball popped up onto the receiver’s back, and Kauf was there to take it.

The play made several sport highlight reels including slotting in at No. 4 on SportsCenter’s Top 10, Fox Sports, CBSSportsNetwork.com, SB Nation, Yahoo! Sports and FanBuzz.