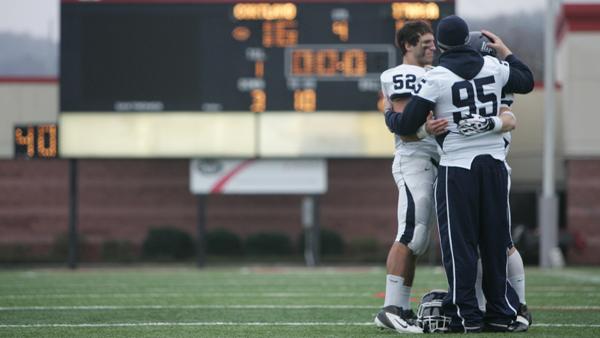 The football team suffered a heartbreaking 16-10 defeat to rival SUNY-Cortland in the 54th annual Cortaca Jug game to end their season at 6–4 overall.

It was set up perfectly

It got hopeless for the Bombers throughout the third quarter. The Red Dragons were heating up on offense and keeping the Blue and Gold offense in check. The Bombers’ defense forced three field goals from more than 30 yards from Cortland junior kicker Mike DeBole, and the South Hill squad remained within reach despite giving up 16 consecutive points. The special teams did their part as well — especially when sophomore Sam Carney had a 38-yard punt return to put the Bombers at the Red Dragons’ 20-yard line with 2:16 left in the fourth quarter. The offense just couldn’t get it in. Red zone inefficiency — the 800-pound gorilla in the Bombers’ 2012 season — reared its head again.

Those that follow Bombers football know that getting into the red zone hardly guaranteed a touchdown for Ithaca this fall. In fact, red zone touchdowns are a rarity for the team. The Bombers will finish last in the Empire 8 in red zone touchdown percentage at 45 percent. Buffalo State is the next lowest squad at 51 percent. The Bombers were one for four in the red zone Saturday, and they will finish seventh out of eighth in the conference in red zone scores (touchdown or field goal) at 61 percent. The Red Dragons were a perfect four out of four in the red zone and will finish second in the New Jersey Athletic Conference with a touchdown percentage of 79.1 percent.

Saturday’s loss does not officially eliminate the Bombers from Eastern Collegiate Athletic Conference bowl contention, but it is a foregone conclusion. At 6–4 overall, and in fifth place in the conference, a bid just isn’t in in the cards for the Blue and Gold.

For Cortland, the win is huge. The Red Dragons entered the game ranked 3rd in the East Regional rankings provided by the NCAA, and the Red Dragons will subsequently host a first-round game in the national tournament next Saturday.

After Salisbury’s upset loss to the Bombers, many suspected that the Sea Gulls might relinquish their hold of the Empire 8 crown, but they proved otherwise. After a 63-23 win against Utica to clinch the Empire 8 Conference’s automatic qualifier, Salisbury clinched the outright conference title with a 48-2 win against Frostburg State in the Regents Cup on Saturday. Senior slotback Ross Flanigan and senior quarterback Dan Griffin each rushed for two touchdowns. The Sea Gulls (8–2 overall, 6–1 Empire 8) entered this week’s action at fourth in the NCAA East Region, so they will likely be hosting a first round game next week.

The NCAA tournament field and ECAC Bowl Invitations will each be announced Sunday.