Four Downs: Road to the playoffs 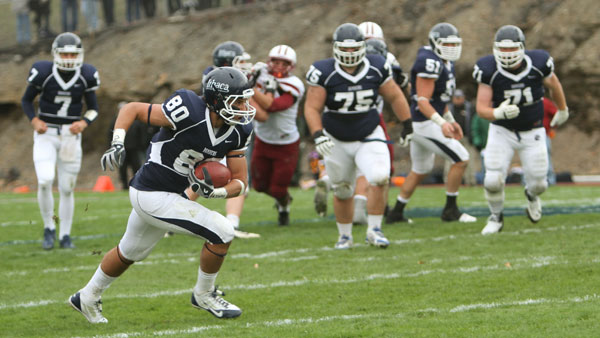 The football team (6–1, 4–1) continues its playoff push with a game against Frostburg State University (1–6, 0–4) at 1 p.m. Saturday at Butterfield Stadium.

The football team’s game against the one-win Bobcats is sandwiched between games against conference contenders. It’s a trap game, and one the Bombers cannot afford to lose. They need to win the next two games to guarantee a place in the NCAA Tournament — an incentive to avoid any slipups.

The easiest way for the Bombers to avoid the upset is to control the ball on offense. They will face, by far, the worst defense in the conference. The Bobcats are last in the Empire 8 conference when it comes to allowed points and yards per game, giving up more than 44 points per game and almost 470 total yards per game. The Bombers do not need to rack up the point and yard totals, though it’s likely to happen anyway, they need to execute and remain turnover-free.

The Bombers’ special teams were a major factor in their win against St. John Fisher College as the Bombers set up two vital scoring drives through the kick-return game. Sophomore wide receiver Josh Oliver’s 53-yard return resulted in a field goal from junior kicker Garrett Nicholson as time expired in the first half. Junior cornerback Sam Carney’s 88-yard kick return sparked a second-half rally as it led to the first of two early third-quarter touchdowns, which gave the Bombers the lead for good. Nicholson and sophomore kicker Max Rottenecker shared the Empire 8 Special Teams Player of the Week. Rottenecker was also named to d3football.com’s Team of The Week. Oliver said he would have scored on his kick return if he could have eluded the Cardinals kicker. He credited the special teams’ efforts in giving the offense good field position.

“The special teams is a big part because that’s the one thing that helps us start a drive,” Oliver said. “If we can get a good return, the offense will have a shorter field and can hopefully score.”

The Bombers only have one special teams touchdown — a 63-yard punt return by Oliver against Buffalo State College. The Bobcats do not have the talent to regularly compete against the Empire 8, proven by their nine-game conference losing streak dating back to last season. Because most special team players are backups, the talent discrepancy gets exacerbated.

The only way Frostburg can upset the Bombers is by having a field day on offense. The Bobcats have scored more than 27 points in five games this year. Conversely, they scored a combined 10 points in their other two games, including seven against Alfred University on Oct. 26 despite it being Homecoming weekend for the Bobcats.

Junior quarterback Ken Emmons, a dual-threat quarterback, leads the Bobcat offense. Emmons is capable of making plays in the passing game and on the ground. He has 12 touchdowns and has averaged more than 250 total yards per game. While Emmons is not the best quarterback the defense will face, he has a skill set that has given the Bombers trouble in the past. Opposing quarterbacks have rushed for 50 or more yards in two of the last three games. Senior defensive tackle Dan Sheldon said the Bombers need to be disciplined and contain Emmons.

“We just have to keep our assignments,” Sheldon said. “We can’t get too far upfield or else [Emmons] will find holes to run through.”

While Emmons can scramble out of the pocket, he struggles completing passes. He has completed fewer than half his passes in the the last three games, throwing five interceptions and only one touchdown. If the Blue and Gold defense remains disciplined, and the defensive ends can contain the quarterback, Emmons will have to try and beat a Bombers defense, which has 12 interceptions in seven games.

The defense may also be without senior linebacker Brian Hardenberg who was injured during the second half of the game Oct. 26 and did not practice Tuesday and Wednesday. Senior Johnny Gorton-Parker will likely replace him at outside linebacker.

Playoff Picture Beginning to Form
The Empire 8 playoff picture is getting clearer each week. There are three teams that are either undefeated or have one loss in conference play: the Bombers, Alfred University and Salisbury University. These are the only realistic contenders for the automatic qualifier into the NCAA Tournament. Alfred will host the Sea Gulls at noon Saturday. The Saxons have won their last two games but need to win their next three. Alfred also needs Salisbury to beat the Bombers on Nov. 9 in order to clinch a place in the tournament. The Sea Gulls can end the Saxons’ postseason hopes with a win. If Ithaca and Salisbury win this weekend, their matchup will have an NCAA Tournament berth at stake.