Four Downs: Round One 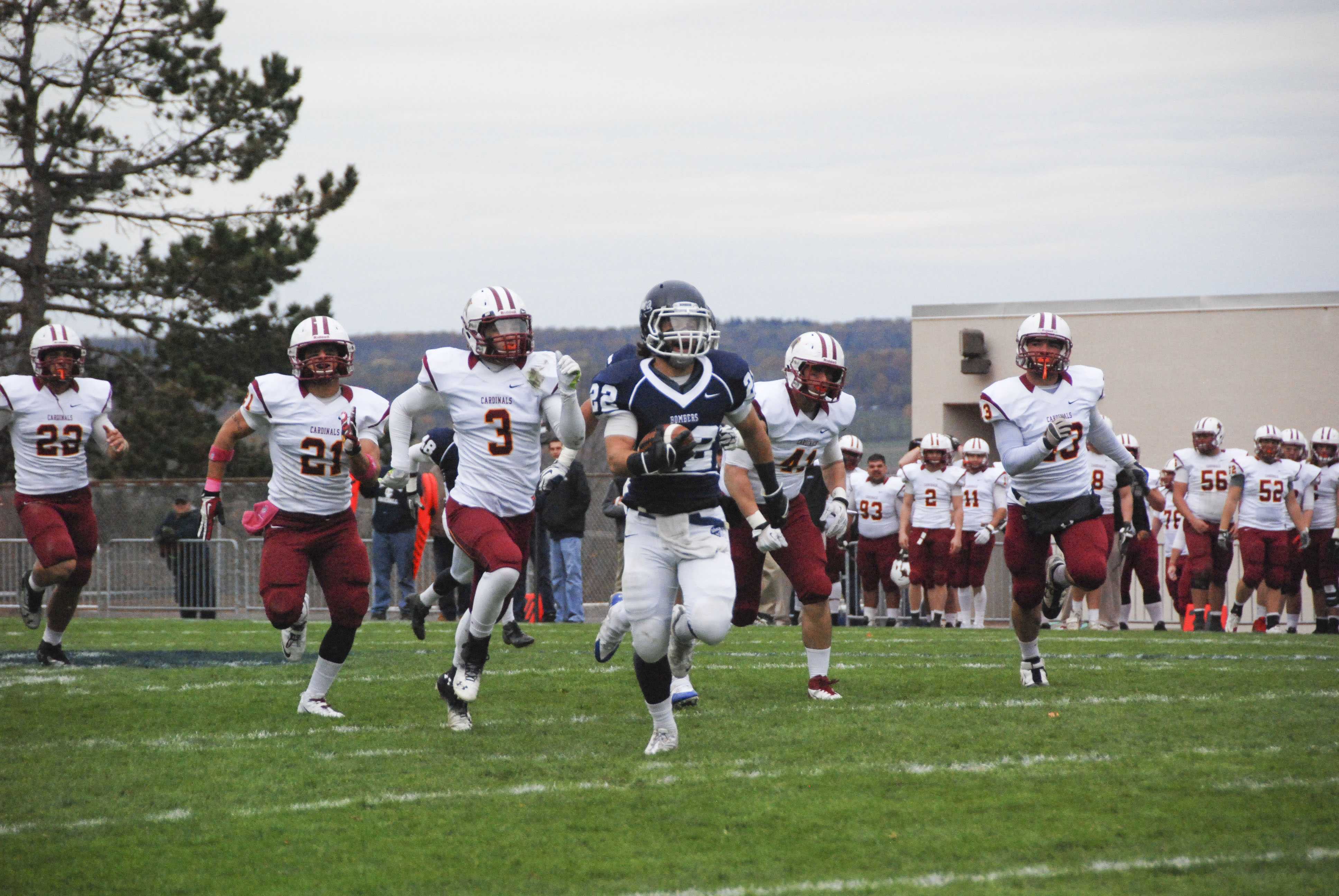 The 24th-ranked Ithaca College football team (8–2) hosts Framingham State University (9–1) in the first round of the NCAA tournament at noon Saturday at Butterfield Stadium.

The Bombers face a team making its second-ever playoff appearance in Framingham State. Ironically, the Rams have more playoff experience on their roster since they competed in the 2012 NCAA tournament when they lost to SUNY Cortland 20–19 after missing an extra point late in the fourth quarter. Then-junior running back Melikke Van Alstyne rushed for 227 yards and two touchdowns, including the touchdown that cut the Rams’ deficit to one before then-sophomore kicker Philip Clain missed the extra point. The Red Dragons ran out the clock on the next possession.

The Rams were able to bring back most of the core members of last season’s team, as they won the Massachusetts State Collegiate Athletic Conference title with a perfect 8–0 record in conference play, earning an at-large bid into the tournament. Though the MASCAC is not a well-contested conference, the Rams have a strength-of-schedule figure that is better than the Bombers’. The Rams have played two teams that are in the NCAA tournament, Rowan University and Endicott College, compared to the Blue and Gold’s one, St. John Fisher College. Rams head coach Tom Kelley said he needed to schedule tough non-conference games to prepare the Rams for the postseason.

Trying to Stop One Man (Again)

Last week, the Bomber defense focused its game plan on containing Cortland junior wide receiver John Babin. It failed. Babin caught two touchdown passes, including the game-winner with about a minute to go. This week, the defense has to focus its game plan on containing Rams’ senior running back Van Alstyne. Kelley described him as one of the best players he has ever seen.

“He’s one of those special players who comes along once in a career sometimes,” Kelley said. “He certainly has had a great four years for us, and he’s a great part of what we do.”

Van Alstyne surpassed the 6,000-yard mark for career rushing yards in his final regular season game Nov. 16. That feat is enough to make any defense take notice, but there is more to Van Alstyne’s game than just carrying the ball. He is capable of catching passes in the backfield and can run the wildcat offense. Bomber defensive coordinator Mark McDonough said Van Alstyne is not the only excellent player they have.

Van Alstyne only has 11 receptions this year, but he is averaging 8 yards per reception. He also has 18 rushing touchdowns. Still, Van Alstyne is not unstoppable. When the Rams played at Rowan University on Sept. 14, he had 63 yards on 22 carries in a 29–19 loss. The Profs finished the regular season 40th in the country in rushing defense. The Bombers are 27th.

If the Bombers can keep Van Alstyne away from the outside and the open field, they will be able to tame the Rams’ most dangerous option on offense. The Blue and Gold defense has yet to allow a rusher to have a 100-yard game all season, and it has already faced a number of excellent running backs.

When Rams’ senior linebacker Pat McGrath was asked what the first thing he noticed when he saw the Bomber offense on film was, he noted its size and its ability to confuse opposing defenses.

“They’re tough, they’re big, they’re physical,” McGrath said. “Just seeing the way they dress up, a lot of their motions and formations. We can’t let that phase us, we have to stay on our keys and know what we’re going to run.”

McGrath characterized the Rams’ defense as a fast, athletic defense that consistently performs well despite being undersized. However, if the weather forecast of snow holds true, the Rams’ defense is in trouble. Playing on grass will slow down any team. Add wintery weather, and a team’s speed is rendered useless.

If the Rams’ defense is slowed down by the conditions, the Bombers will have the opportunity to establish the run with their physical play. However, the South Hill squad needs to figure out who will play at running back. Freshman Evan Skea has had consistent success racking up rushing yards, but he also has problems with fumbling the ball. Senior Rakim Jones is fully fit, as well as junior Tommy Padula. Bomber offensive coordinator Ryan Heasley said he has not made a decision as to whom will be the featured back on Saturday.

“We rotated all of the guys in during practice, and we have for the last couple of weeks,” Heasley said. “All three of those guys are ready to play.”

It would not be a surprise for all three running backs to see time, especially if the weather conditions force each team to run the ball heavily. Bomber head coach Mike Welch might have tipped his hand when he expressed confidence in Skea’s ability despite his fumbling issues. But having a slumping freshman starting in a playoff game with poor weather conditions would be a risky move.

The Bombers had a mixed fortune with the NCAA tournament draw, as they ended up in the same section as No. 1 University of Mount Union Purple Raiders. But they also have a definite possibility of hosting two playoff games.

No. 10 Johns Hopkins University received the harshest draw of any team in the tournament. The Blue Jays went undefeated in the regular season and won the Centennial Conference, but they are paired with No. 15 Wesley College, one of two matchups between top-15 teams. Pat Coleman, executive editor of d3football.com, said on Twitter the Bombers will likely host a second-round game if the Wolverines win.

Using the d3football rankings as a reference, the Bombers are in the strongest section of the bracket, as five of the eight teams in the section are in the Top 25. The Wittenberg University Tigers are the fifth Top-25 team, as they are ranked No. 12. The Tigers host the Lebanon Valley College Dutchmen, who are making their first ever NCAA tournament appearance on Saturday.

The Purple Raiders are the defending national champions, the No. 1–ranked team in the country and just went undefeated during the regular season. They are the favorites to win the entire tournament, and they host the unranked Washington and Jefferson College Presidents in Ohio.

All four games in the bracket start at noon Saturday.