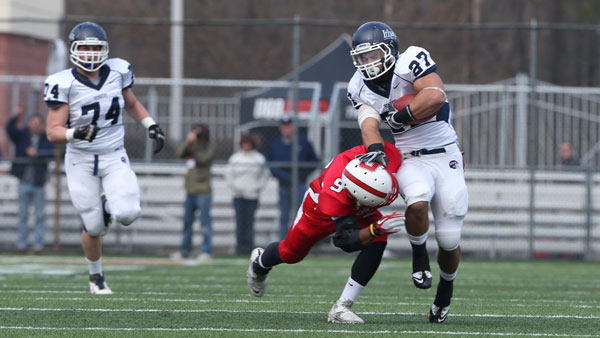 The football team (8–1) looks to end a three-year Cortaca Jug drought this Saturday as it hosts SUNY Cortland (5–4) at noon at Butterfield Stadium.

Junior cornerback Sam Carney said, during an in-studio interview on WICB on Nov. 10, the Bombers have three goals every year: to win the Empire 8 conference, to win the Cortaca Jug and to win the National Championship. The Bombers fulfilled their first goal with a 24–23 overtime win at Salisbury University on Nov. 9. Now, they have a golden opportunity to accomplish their second goal Saturday against SUNY Cortland.

The Red Dragons are a team involved in a messy transition. They have been eliminated from NCAA tournament contention and have started three different quarterbacks this season. Sophomore John Grassi was the most recent starter, as he threw for almost 350 yards and four touchdowns in his first career start last week against Morrisville State College. Grassi replaced junior Tyler Hughes, who left during the third quarter of the game against Rowan University on Nov. 2 because of an injury.

On defense, the Red Dragons have a promising prospect in freshman linebacker Tristan Laurore, who leads the team with 91 total tackles — 57 were solo. However, Laurore and the Red Dragon defense have struggled to stop the run game, allowing at least 150 rushing yards in the last four games.

Freshman Evan Skea has been a revelation for the Bombers. Skea started the last two games at running back after senior Rakim Jones suffered a foot injury Oct. 19 against Utica College. He has rushed for 100 yards or more in each of the last two games, and he is primed for another solid outing against a struggling Red Dragon defense. Skea said he has been working out and studying film unlike any game he has played before.

“I’ve never experienced anything like it,” Skea said. “We definitely had a few rivalries [in my hometown of Basking Ridge, N.J.], but nothing quite like this.”

This could be Skea’s breakout performance if he has good ball control. He has fumbled in each of the last two games, and head coach Mike Welch has not been pleased with how Skea carries the ball, which he holds too far away from his chest, allowing for defenders to jar it loose. However, Skea’s agility, vision and strength are much more natural attributes, and it helps make him a key part of the Bombers’ offense for the present as well as the future.

Win at home, to stay at home

The Bombers remain in second place in the NCAA East Region rankings behind undefeated Hobart and William Smith College. The Statesmen won the Liberty League title and are ranked No. 7 overall by d3football.com, yet they are not likely to be the top team in their bracket.

The Division III NCAA Tournament is not divided into regions, but because the NCAA aims to limit travel expenses in the first round, the bracket is designed accordingly. However, if there is no national powerhouse in a region, as is the case in the East, a team from another region, likely the North, will move into that part of the bracket. It would therefore be centered around that team, which would possibly host four playoff games.

The Bombers are, in all likelihood, not going to host four playoff games because of their record. They do, however, look set to host at least one game if they win Saturday’s game. The win would likely guarantee them no worse than second place in the regional rankings. A win and a Hobart loss to the University of Rochester could launch the Bombers to the No. 1 spot in the region. This would assure Ithaca at least one home game.

Twenty-five years ago, the Cortaca Jug established itself as a famous rivalry. On Nov. 5, 1988, SUNY Cortland hosted Ithaca at now-demolished Chugger Davis Field. Both teams were 8–0 that season, but the Bombers were the clear favorite. They had just beaten Buffalo State College and Hobart College by a combined total of 111–0. The Blue and Gold had won 14 of the previous 15 Cortaca Jug games and were the No. 1 team in the East Region — the Red Dragons were No. 3. Back then, only four teams in each region made the tournament, and a win by either team would clinch one of the four spots. This was the case for Cortland, which ended its regular season against St. John Fisher College the week after.

The game gave Cortland a chance to complete a remarkable turnaround, as they had gone 1–9 in 1986. They were coached by Dennis Kayser ’74, who played for legendary Bombers head coach Jim Butterfield. Kayser’s defensive coordinator was current Alfred University head coach Dave Murray. Butterfield also had a current Empire 8 coach on his squad, Bombers head coach Mike Welch. Welch said the ’88 Cortaca Jug was one of the best games he has ever coached because of the frenzied atmosphere.

“Typically, you play in front of two or three thousand,” Welch said. “There were 8,000 people there. It was as hostile an environment as you could imagine. It was everyone around, but there was no security whatsoever. It was wild. It was a fun game to be a part of.”

Though the Bombers scored on their first offensive play, they couldn’t find consistent success on offense. They used two quarterbacks, who each made costly turnovers, while the Red Dragons rallied behind senior fullback Gareth Greyson and a successful fake punt. Early in the fourth quarter, Keefer completed his second touchdown pass to senior Mark Houghton to give the Red Dragons a 21–20 victory against the Bombers.

The Blue and Gold would get the last laugh three weeks later, as they won the rematch with Cortland 24–17 in the NCAA Tournament quarterfinals. After that game, the Bombers won their next two games to win their second national championship.

Ironically, the 1988 Bombers only loss may be just as impactful as their championship win. Though the Red Dragons were eliminated by the same team three weeks later, the Cortaca Jug–win signified their arrival as a prominent football program.

The Red Dragons continued to draw similar attendance figures for subsequent Cortaca Jug games they hosted, and it prompted the school to build the Cortland Stadium Complex in 2002 as a part of Cortland’s initiative to improve its football facilities. The new facilities attracted both prized recruits and professional teams. The New York Jets now use the complex as their training camp home.

The Red Dragons are currently on-par with the Bombers as a football program, and it has made the rivalry a spectacle today.