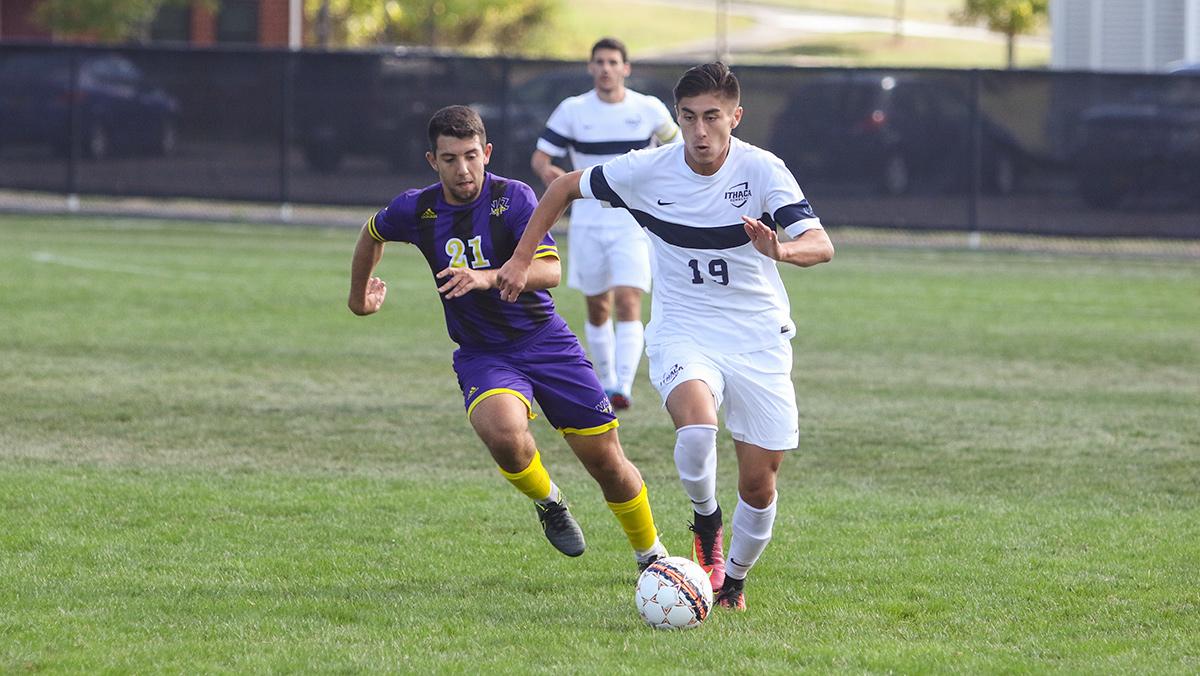 During Ithaca College men’s soccer games, mixed in among a herd of upperclassmen is a new face on the field: freshman Justinian Michaels.

Michaels has started and played in seven of the Bombers’ eight games so far this season and has only been subbed out twice. Head coach Patrick Ouckama said it is rare for a freshman to have so much playing time.

“He’s a smart player,” Ouckama said. “He has a lot of technical ability, and he competes very, very hard. He’s a player that right now finds himself playing a lot of left back, but he can play a lot of different positions.”

Michaels went to high school at Don Bosco Preparatory in Ramsey, New Jersey, an all-boys private Catholic school. He starred on the soccer team and helped it remain a perennial national contender in high school soccer. The team won the league title and was a state finalist in his junior and senior years with the Ironmen.

The year he graduated, he and six teammates went to college to play soccer for their respective schools.

Michaels said attending Don Bosco was one of the best decisions he has made in his life.

“I decided to go to Don Bosco Prep for a couple reasons,” he said. “They are a prolific sports school, and I really wanted to pursue my soccer career. Don Bosco also has prestigious academics, and I always put that before soccer, so to me that was a vital decision in the process.”

Michaels decided to make the big transition from playing high school soccer to playing soccer with the Bombers. He said his decision to become a Bomber was due to more than just continuing to play soccer.

“Committing to Ithaca College had many factors involved for me: mainly, the esteemed academics and the incredible athletic–training program here that is nationally ranked,” he said.

Ouckama echoed Michaels’ sentiment about his interest in the athletic–training program and how that influenced Ouckama to recruit Michaels.

“So I’m on the recruiting trail. He’s been in touch with us for a while. He was interested in athletic training, so Ithaca was obviously on his radar for that program, and then once I saw him play, I was immediately interested in him,” he said.

Ouckama said it is a struggle for freshmen to play as much as Michaels has played this season.

“He’s a freshman who is obviously getting a lot of playing time, so that’s always exciting but difficult at times,” he said. “He does find himself as a leader but also as a younger player. It’s tough to juggle that, but I think he and a few of the other freshmen have handled it very well.”

Michaels’ roommate and teammate, freshman Jack Ochs, said Michaels is very persistent on and off the field.

Ochs has been subbed into five of the Bombers’ eight games so far. He said since he and Michaels spend a lot of time together, they have a better connection on the field.

“I guess just being together so much off the field, we’ve sort of formed a bond and then on the field,” Ochs said. “We kind of play on the same side of the field. He plays outside back, and I play outside mid, so we kind of have an understanding of where each other is going to be and what each other’s tendencies are, so we can kind of coordinate that, and it helps us flow better in the game.”

Michaels said he hopes to see a bright future ahead of him within the next four years.

“As for Ithaca, I plan on helping the team win the Empire 8 Conference tournament and advancing to the NCAA National Tournament and competing against some of the top–ranked teams in the country,” Michaels said. “And for my future three years, I look to lead the team as a returning player and try to contribute more to the team than I am now as just a freshman.”

IC students kick back by volunteering with youth soccer teams