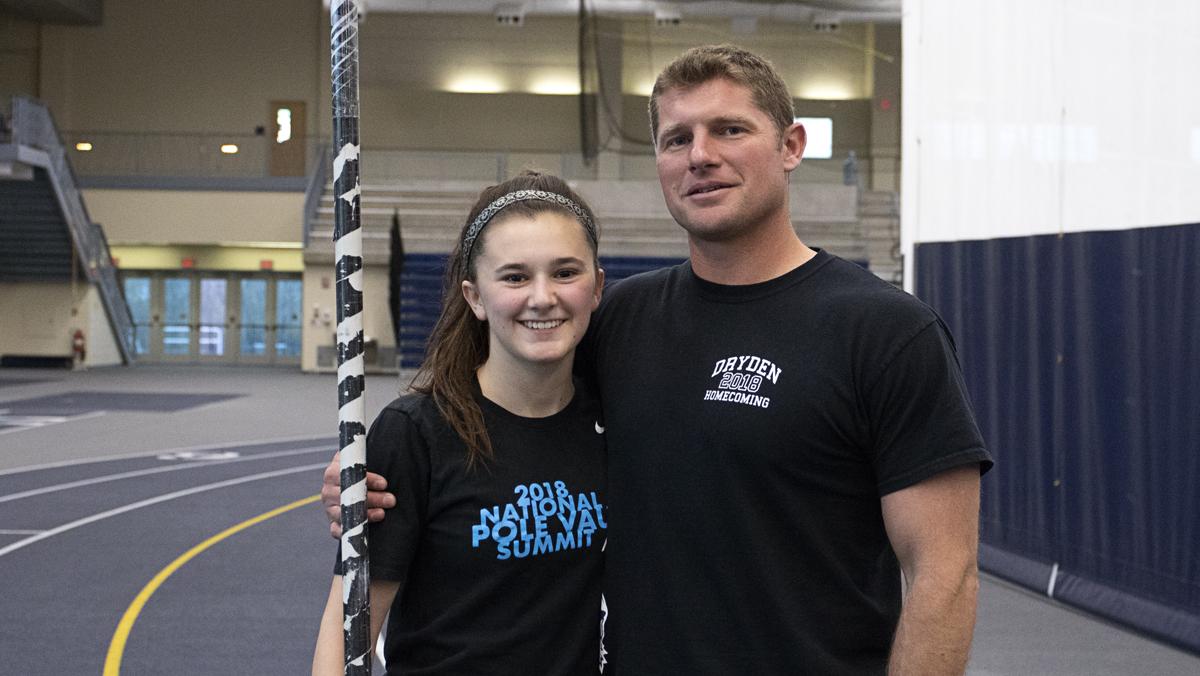 ABBEY LONDON/THE ITHACAN
Freshman Meghan Matheny began working with pole vault assistant coach Matt Scheffler in eighth grade and continued to train with him through high school. She decided to attend Ithaca College largely so that Scheffler would remain her coach.
By Mikayla Rovenolt — Staff Writer
Published: May 1, 2019

Freshman pole vaulter Meghan Matheny stands at the end of the runway, preparing to face the bar in front of her during the final rounds of competition at the All-Atlantic Region Track and Field Conference Championships on March 1.

Though it may be the biggest meet of her collegiate career to date, Matheny is calm and collected, as her entire family and longtime coach Matt Scheffler stand in the arena supporting her. She takes a deep breath, sprints down the runway, plants her pole and soars over the bar, setting a new personal best of 3.77 meters.

Throughout her track and field career, Matheny has always competed with her family and Scheffler behind her. She was born and raised in Lansing, New York — just a 22-minute drive from Ithaca College’s campus — and Scheffler coached her high school track and field team. Despite having several Division I offers, Matheny said she chose to continue competing at the college because she could not pass up the opportunity to stay within her comfort zone while striving for new heights in competition.

Before joining the college’s track and field team, Matheny worked with Scheffler, the college’s assistant coach for pole vault, for almost four years, and she has known him for even longer. His influence got her involved with pole vaulting when she was just in middle school.

“The pole vault coach here was the track coach and PE teacher at my high school,” Matheny said. “My mom worked in the building, and he said to her, ‘If she ever quits gymnastics, have her try pole vaulting. I think she’d be good at it.’ When I quit gymnastics in eighth grade, I joined track.”

The University of Massachusetts Amherst, Boston University and Boston College were in the running for potential schools for Matheny, but she finally decided on the college because of its proximity to home. She would also be continuing her athletic career with a coach who already knew her and how she operates.

“What’s different about [Scheffler] compared to other coaches is he’s really laid back and understands you not just as an athlete but as a person,” Matheny said. “He really caters to every individual’s needs and strengths. Most coaches teach pole vault one way, but Scheffler really focuses on what works for each person.”

Scheffler said he and Matheny have developed a close relationship, and he was pleased when she decided to stay close to home rather than leaving for a larger Division I program.

“I thought it was very likely that she would come here and hoped she would, too,” Scheffler said. “You know, she was a great athlete. She was a state champion her senior year for me as well. She had seen from other vaulters that were older than her go off to different programs, and they didn’t have as much success, so I think she kind of wanted to stay with me and be consistent.”

Matheny has wasted no time rising as a star for the Bombers. She has competed in the pole vault 17 times so far this year, earning a place in the top three 12 times. Her indoor clearance of 3.77 meters was higher than the top vaulters at both Boston University and the University of Massachusetts Amherst. Matheny also competed at the NCAA Indoor Track and Field Championships on March 8 and 9, placing just outside of an All-American finish in ninth.

Freshman pole vaulter Dominic Mikula said he has been a friend of Matheny’s for many years. The two have known each other since their freshman year of high school when they started pole vaulting together under Scheffler. Mikula said that he and Matheny have developed a close relationship and that he appreciates still having her as a teammate in college.

“She’s always been there for me and is family to me,” Mikula said. “As a friend, Meghan is always there when you need her. I know that I can trust her with anything.”

When practice is finished, many athletes will stop by the athletic training room to have their aches and pains treated. However, when Matheny comes in, it is usually not to have her shoulder checked out, but to have a quick chat with her father, Michael Matheny, clinical professor in the Department of Exercise and Sport Sciences. He is also the college’s head athletic trainer.

“It’s been nice having [her] here because [she] knows if [she] needs something [she] can swing by the office, text me, find me — they pretty much know where I’m at every day,” Michael Matheny said. “It’s really been nice as they’ve gotten to college age to still have that close connection.”

Meghan Matheny said that having her father so close by eased her transition into college and that having an athletic training expert in the family is a convenient resource for her.

“It’s not weird in any way,” Meghan Matheny said. “It was nice at the beginning of the year to just walk to his office if I wanted to see my dad, and, now, it’s nice because if something is bothering me, I can just ask, ‘Hey dad, can you look at my ankle?’ If I need something, I can run home or they can drop it off for me.”

Michael Matheny said he enjoys being able to attend many of his daughter’s track meets, particularly several home meets during the indoor season and those at nearby universities like SUNY Cortland. He said that staying connected with his daughters is something he values.

Staying close and connected with her family and Scheffler’s impact on her as a coach has ultimately brought Meghan Matheny to the college to continue her education and athletic career.

“In high school, he really helped me by continuing to believe in me and what I was capable of, which is not something I was very good at,” Matheny said. “He just really believes in all his athletes and cares about you as more than a vaulter which helps so much.”