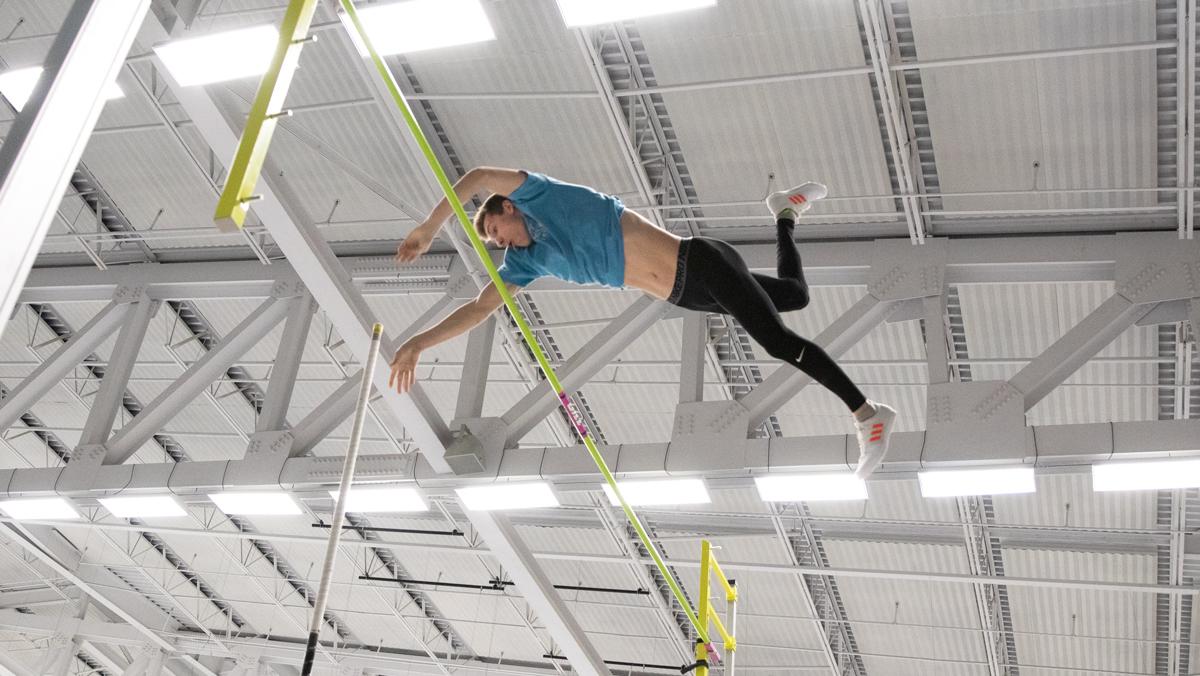 Freshman Dominic Mikula stands at the end of the runway in Glazer Arena preparing to pole vault at his second meet of the season. He breathes, takes off toward the bar and clears it, setting Ithaca College’s new pole vaulting record with a height of 4.72 meters.

While his 4.72-meter vault Dec. 7 against SUNY Cortland was his first time breaking the record, it wasn’t his last. On Jan. 26, Mikula went on to shatter his own record at the Utica Pioneer Open with a vault of 4.80 meters, ranking him No. 8 in the country in Division III track and field. The record was previously held by senior vaulter Martin Desmery, who set it at 4.71 meters during his junior season.

“I knew I jumped 4.57 meters in high school, so I was only about 20 centimeters off to start [college track and field],” Mikula said. “I didn’t think it would happen this quickly, but it’s a goal I wanted to achieve, and I got it.”

The honor of school record holder is not the only recognition Mikula has received this season. On Dec. 10, following his record-breaking jump, he was given the Liberty League Field Performer of the Week. Later, on Jan. 14, he was awarded the Liberty League Men’s Track and Field Rookie of the Week and set a new facility record when at the Utica College Invitational & Multi.

For Mikula, the transition into becoming a college athlete has been different from his track experiences in high school because his training is focused entirely on pole vaulting.

“In high school, I trained as a sprinter, and I was a pole vaulter on top of that,” Mikula said. “Here at Ithaca, I train as a vaulter the entire time, doing vaulter-specific activities.”

Desmery, the former holder of the college’s vault record, has noticed through their training together that Mikula has great team energy and possesses a willingness to help and support his teammates.

“At practice, he always puts forth his best effort and is always ready to lend a helping hand or useful tips when needed,” Desmery said. “In the end, it doesn’t matter who jumps higher; he’s right there cheering for everyone and wishing for them to do their best with the rest of us, even if that means they might get the best of him that day.”

Ithaca’s pole vaulting coach, Matt Scheffler, has been working with Mikula since 2014 when Mikula first began attending Monday night clinics for middle and high schoolers that Scheffler held at the college.

“He’s very energetic and has a positive attitude, so he fits in very well with our guy vaulters here,” Scheffler said. “He has great team chemistry and is a very talented athlete, works really hard, and he started right where he left off in high school, actually a little better.”

Moving forward with his first season as a Bomber, Mikula and Scheffler plan to keep working with positive attitudes and high energy.

“It’s a progression as we go through,” Scheffler said. “[Mikula] is still growing, and with lifting and all those things, he is going to continue to get much stronger too. He’s going to become faster and stronger, and as a result, bigger heights are going to come.”

The only goal currently in Mikula’s mind is to clear four meters by the end of his senior year. As a freshman, he is already close but recognizes that there is still more work to do.

“I have to keep pushing and continue those high expectations,” Mikula said. “I can’t be one of those people that is just OK with where I’m at. I have to keep going.”