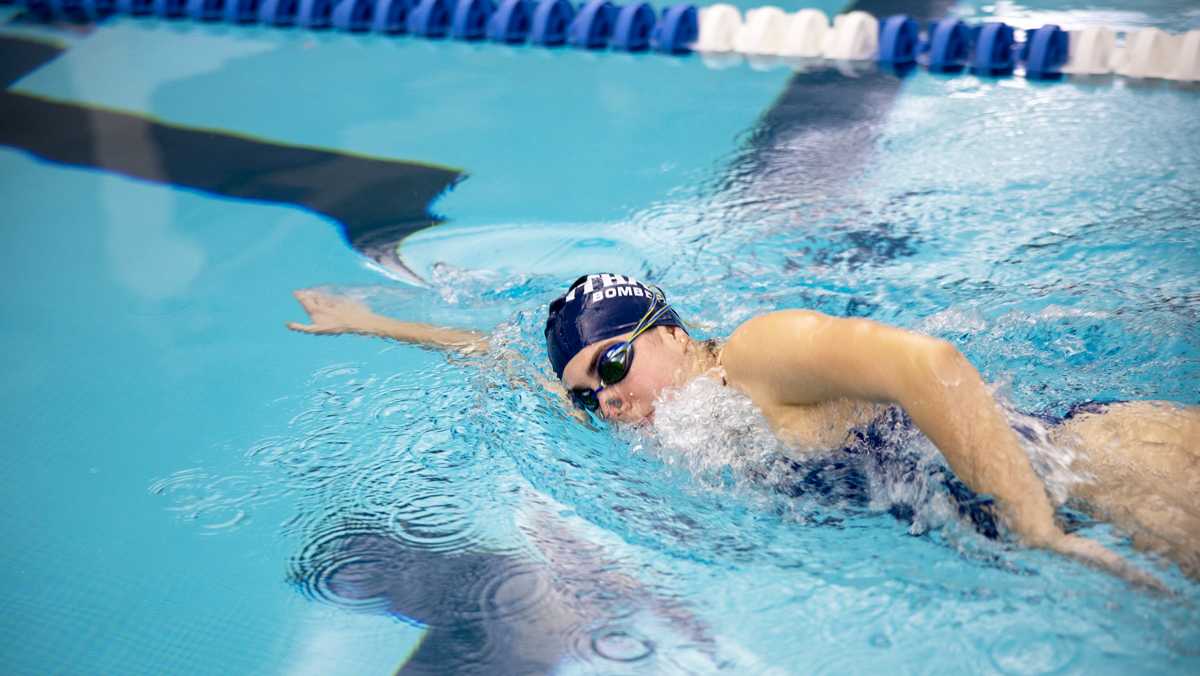 TENZIN NAMGYEL/THE ITHACAN
Freshman swimmer Jane Pfeufer has hip impingement and knee tendonitis that cause her regular pain. Despite the injuries, she is one of the fastest swimmers on the team.
By Connor Glunt — Staff Writer
Published: December 12, 2019

Freshman swimmer Jane Pfeufer rarely finishes practice without experiencing pain in her hips and her knees. However, her injuries do not slow her down in the pool, and she has established herself as one of the quickest athletes on the Ithaca College women’s swimming and diving team.

Pfeufer, who is from Georgia, was a state champion in high school in the 4×100-yard freestyle relay. She currently holds the fastest time on the college’s swim team in both the 50- and 100-yard freestyle. She also regularly sees the athletic trainers to receive treatment for hip impingement and tendinitis in both of her knees.

Hip impingement occurs when the ball of the hip does not fit the socket, resulting in wear and tear of the joints that can also lead to arthritis. This prevents Pfeufer from swimming breaststroke because of the hip motion used. Knee tendinitis is an inflammation of tissue that usually occurs when athletes increase the intensity of their training and workouts, which leads to persistent knee pain.

Pfeufer said she does not see her pain as an excuse to take extra rest but a reason to work even harder. The women’s swim team is currently 6–0, its best season since its undefeated campaign in 2016–17. However, the team has been plagued by injuries since the beginning of the season. Pfeufer said it would not sit right with her to slow down when she sees her teammates pushing through the same level of pain, some dealing with even worse ailments.

“Angelina Domena is really injured, and every time I say something hurts, she’s like ‘Go to the athletic trainer,’” Pfeufer said. “Morgan Hoffman-Smith, who’s another one of our top swimmers, is also injured right now, and just seeing her perform well and be injured pushes me like ‘I can do that even though I’m struggling with pain right now.’”

A recent study conducted by researchers at the University of Pittsburgh found that moderate levels of exercise can actually improve the healing process for overuse injuries, especially tendonitis. Pfeufer sees the athletic trainers to complete a physical therapy regimen most days on top of her regular practices to ensure that she is healing properly.

Domena, a senior on the team, deals with chronic shoulder pain. Pfeufer said Domena has helped her get treatment and kept her in the pool. The pair have also developed a bond that started at the beginning of the season. Domena said that she and Pfeufer push each other during the rehabilitation process and help each other become the best swimmers they can be.

“I’d say she’s like my little buddy,” Domena said. “I see her more as a sister. When the freshmen were fir 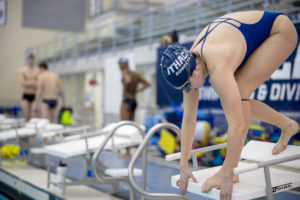 st introducing themselves, I just felt a connection with Jane. We’re able to push each other through practice because she is such a talented athlete. I use her to push me, and I know she comes to me for support and to ask questions.”

Domena said that Pfeufer is the team’s “secret weapon.” Her start to the season has even exceeded expectations from some of her experienced teammates.

“You would never guess that she’s this insanely talented athlete, but when she gets in the pool, she just shows you what she’s got,” said Domena. “I think ‘silent hard worker’ is definitely a really good way to describe Jane because she would never brag about how talented she is or say how successful her high school season was. I think she’s extremely humble, and she takes under her wing whatever the coaches ask of her and whatever us leaders on the team ask of her.”

Pfeufer said that even she has surprised herself with her results so far. She said that she has already come close to beating her high school personal records but that her priority right now is trying to get back to 100% health.

Domena said she is excited to see what Pfeufer can do when she heals up. As someone who’s dealt with pain for the past five years, Domena said, she can relate to just how grueling the recovery process can be.

“I guess just having an injury just makes you push through the hardships and the bumps in the road and makes you mentally stronger,” Domena said. “I think once she is healthy and doesn’t have to deal with these injuries on a daily basis anymore, she’ll be able to take that mental strength and physical strength that she’s had to put into rehabbing her injuries into training.”

Head coach Paula Miller said she is also looking forward to the end result once Pfeufer is healthier. Miller said she has had many swimmers before Pfeufer who chose to continue swimming competitively despite injuries. She said Pfeufer is the type of athlete who pushes through no matter what to lead the team.

“Just like many athletes have been doing for many years, they’re able to work through pain and adversity,” Miller said. “They’re very determined, that’s a personality trait. That’s what I see in her as a swimmer. Regardless if she’s not feeling well, she’s still going to do the work. She still has goals. She’s still going to get where she wants to go.”

Miller said she does not believe any level of success is off the table for Pfeufer. She said she believes individual championships, team records and making the national championship are all possible. Pfeufer said she is more invested in the team’s success this year than her own.

“I would love to see some super strong performances at Liberty Leagues,” Pfeufer said. “We’re up on top. There’s a couple of teams that may be close to us. … They’re a threat, but not anything we can’t handle.”