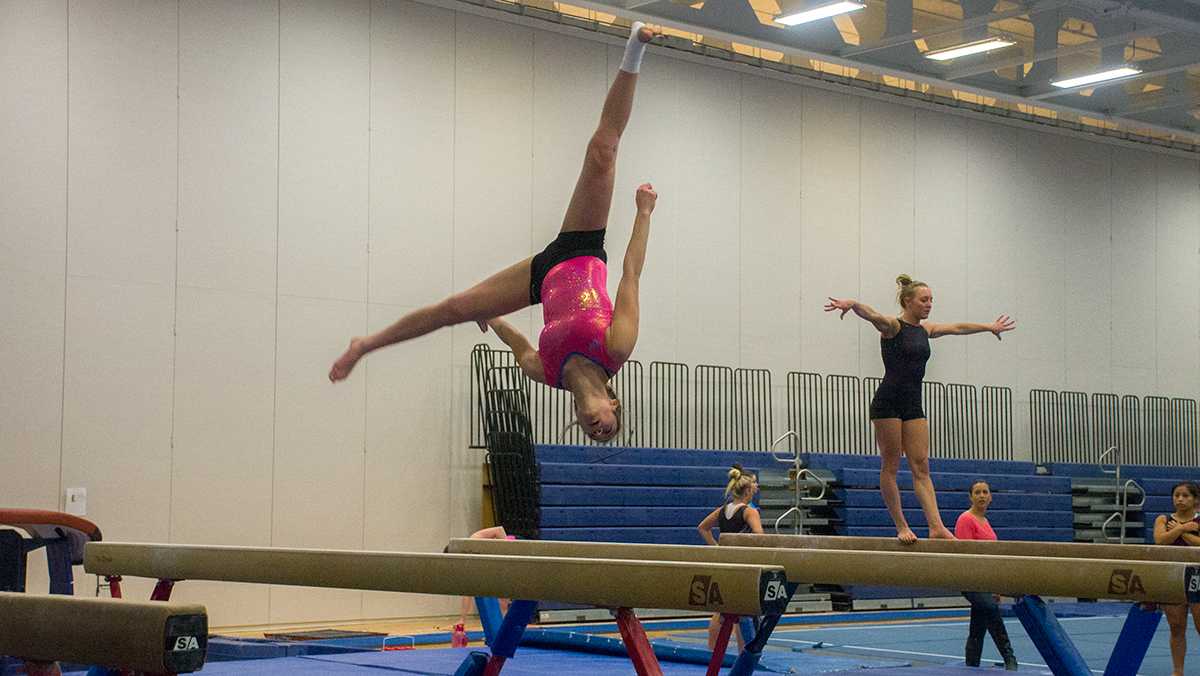 Athletes take a variety of different paths to becoming a collegiate athletes. For freshman gymnast Nina Bustamante-Nadeau, her path included stints with the Greek national team and M & M Gymnastics & Dance in Wisconsin, a team that has produced Olympians. These experiences have helped her become one of the Bombers’ strongest gymnasts so far this season.

Bustamante-Nadeau, a clinical health studies major, has lived in three very different places: Chicago, Wisconsin and Greece. However, even with moving around often as a child, gymnastics was one thing that remained stable. She said she began when she was young and never stopped.

“I’m not completely sure why I started, but I have been doing gymnastics for my whole life,” Bustamante-Nadeau said.

When she was 7 years old, her  father landed a job opportunity in Greece, so her family decided to seize the moment and move there.

In Greece, she attended an American international school, where she was a part of the club gymnastics team for all seven years of her stay.

“I [met] a lot of kids from all over the world, and that was a really cool experience,” Bustamante-Nadeau said.

Considering the difference in setting of the U.S. and Greece, there were also situations she had to adapt to in the sport she once knew very well. In her opinion, the biggest difference was how they split gymnasts up and determined what level or group they would be in.

“Here the level is based off difficulty, but in Greece everything was by age,” Bustamante-Nadeau said. “It kind of sucked because at times I would be the only one in my age group.”

Being the only gymnast in her age group was a little lonely and was at times detrimental to her success, she said.

“There was a big economy crisis in Greece when I was 12, and a lot of my teammates quit. So when I was the only one left in my age group, my coaches couldn’t just support me by myself,” Bustamante-Nadeau said.

Even in crisis, Bustamante-Nadeau managed to continue to do what she loves. Because she was the only gymnast in her age group, her coaches decided to send her to train with the Greek national team so she could practice with other people.

“The Greek national team was interesting because I was not Greek, so it was not the best situation,” Bustamante-Nadeau said. “Not being Greek affected my training because the coach did not really want to train a gymnast that was not able to compete for him due to the fact that I didn’t have Greek nationality.”

She continued with this team until she moved to Wisconsin to live with her grandmother in order to get better training. Despite the sacrifices that came with being a continent away from her parents, she said the move was worth it because she was able to obtain top-notch training at M & M Gymnastics & Dance.

“I had originally gone to that gym when I was home visiting my grandma for a month that summer,” Bustamante-Nadeau said. “From right there, I knew it was a great gym. I was a part of a very close and supportive team with amazing coaches. When I moved back, there was no question about what gym I was going to.”

Moving to other parts of the country and to new countries all together can be tough, but Bustamante-Nadeau found solace in the fact that gymnastics was something she could take with her everywhere, even to college.

“Gymnastics was always there,” she said.

Bustamante-Nadeau is usually an all-around gymnast, meaning she trains for all four events — vault, bars, balance beam and floor — but she is currently limited to beam due to an ankle injury. At the team’s first meet of the season Jan. 16 against Southern Connecticut State University, Brown University and Springfield College, she placed second on the beam, finishing ahead of Division I and Division II gymnasts.

“She’s been having some trouble with her ankle, and that’s limiting to other events, but she’s still able to excel at balance beam,” head coach Rick Suddaby said.

“She’s a very graceful and beautiful gymnast in her movements,” Gery said. “She’s very determined and hardworking and continues to work until she’s happy with how she performs. She’s doing amazing so far.”

Suddaby said Bustamante-Nadeau is a very goal-oriented gymnast and that he is glad she is on the gymnastics team.

“She’s such a great kid. Very, very talented; very, very committed,” Suddaby said. “She’s a great teammate. Everybody likes her, and she likes everyone.”

The transition from place to place could seem overwhelming, but Bustamante-Nadeau said it has been helpful and given her new perspectives, particularly when it comes to gymnastics.

“Moving has given me the opportunity to adapt to new teams, but at the same time still be a supportive teammate, and that’s an amazing feeling,” Bustamante-Nadeau said.