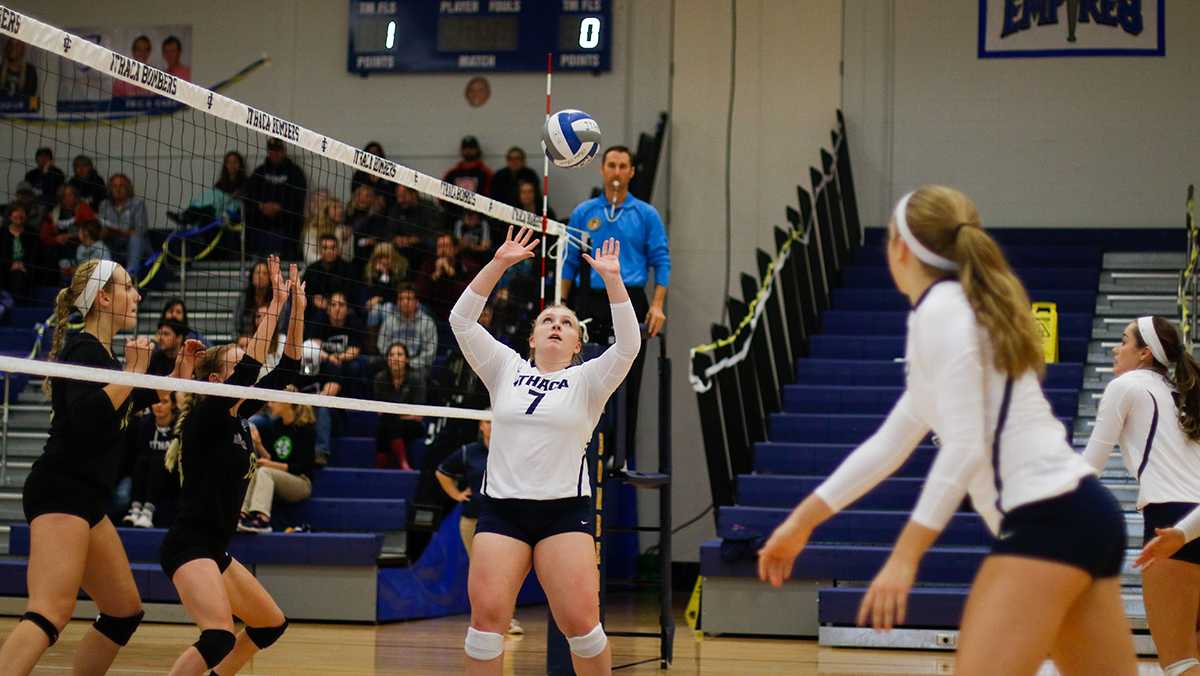 With the Bombers’ volleyball team down 11–7 in the fifth set of a crucial matchup against SUNY Oneonta on Oct. 18, freshman setter Caitlyn Floyd passes the ball to junior opposite outside hitter Caroline Gerulskis, who goes for the kill.

The kill brings the Bombers within three points of the Red Dragons, and the Blue and Gold proceed to win the fifth set and take home a victory. Floyd recorded 17 assists in the win and has a team-high of 461 assists for the season.

It is unusual for a freshman to see so much playing time early in their college sports career. However, Floyd has quickly become a pivotal member of the team.

In addition to leading the team in assists, she was named the Empire 8 Rookie of the Week after recording 51 assists, 11 kills and 10 digs at the Wellesley Invitational on Oct. 14–15.

Floyd began playing volleyball, basketball and lacrosse when she was in second grade. Once in high school, Floyd chose to focus solely on volleyball. She earned several accolades at Immaculate Heart Academy, where she tallied 956 assists her senior season. Floyd was named the 2014 Gatorade Player of the Year in New Jersey, an honor given to the top player in each state.

She said part of the reason for her success is her love of the game.

“Anytime practice is canceled, I still go to the gym to get touches,” Floyd said. “I don’t think of volleyball as a chore. It’s something that I love.”

She said college volleyball is more challenging than what she had experienced before but that that is going to help her grow as a player.

“I have never had a team where every person is so competitive,” Floyd said. “It’s nice to be in that kind of environment.”

Floyd is one of two setters on the team. She and junior Kayla Gromen alternate time on the court.

“Caitlyn has a lot of underlying skills,” Gromen said. “Caitlyn is very wise and very knowledgeable. She is a very strong player and knows the game well.”

Like the quarterback on a football team, setters choose what play the team runs. The success of the offense largely depends on the setter’s ability to pass the ball successfully. On the court, it is a setter’s responsibility to facilitate the team’s offense by frequently passing the ball.

Head coach Johan Dulfer said Floyd has continued to grow throughout the season.

“Caitlyn is getting better every week,” Dulfer said. “She is a good all-around player that can do a lot of things.”

Floyd said she has big goals for the next four years.

“My athletic goals for the next four years are to qualify for the NCAA tournament each year and hopefully vie for a national championship,” Floyd said. “I know that everything we do now is working toward that future success.”

IC volleyball picks up two wins against Utica and Houghton

Sports One on One: Junior volleyball player Kayla Gromen