From Bomber to Blue Jay 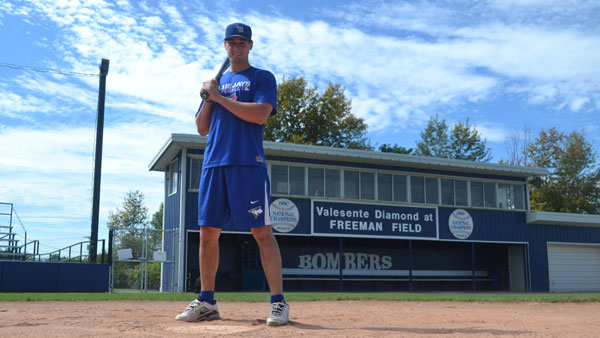 After every home baseball game this summer at Bowen Field in Bluefield, W.Va., infielder Tim Locastro walked around the field, while children and their parents approached him and his teammates asking for an autograph. With each baseball, hat or glove he signs, Locastro thinks back to his youth in Auburn, N.Y., when he was the one asking for autographs from the Auburn Doubledays, the minor league baseball team based in his hometown.

After being drafted by the Toronto Blue Jays and playing a summer of minor league baseball, Locastro returned to Ithaca College on Friday to begin his final semester.

In the spring, Locastro was a junior at the college, and he helped lead the baseball team to the Division III College World Series. Locastro set program single-season records with 71 runs scored and 40 stolen bases, and batted .436 with 13 doubles, six triples and four home runs.

After making it to the final four of the 2013 Division III College World Series for the first time since 1994, the Bombers were eliminated by the University of Southern Maine. Regardless, the Toronto Blue Jays drafted Locastro in the 13th round of the Major Baseball entry draft 11 days after the season ended.

In June, Locastro decided to forgo his senior season of baseball and accept the offer to play for the Toronto organization. Though he gave up his final year of his college playing eligibility, his plan is to finish his degree in business administration at the college this fall.

After flying to Florida to sign his contract and assorted paperwork in June, Locastro was assigned to play for the Bluefield Blue Jays of the Single-A Rookie Appalachian League, a league exclusively for ballplayers in the first year of their professional careers.

In 43 games for the Blue Jays, Locastro hit for a .283 batting average and had the second-most steals for Bluefield with 12 total. Despite his regular season numbers, Locastro struggled in the opening month of playing. He had to make the adjustment from shortstop, where he played for the Bombers, to second base, and he hit for a .235 batting average.

Locastro said the biggest contributing factor to his early season struggles was that he was trying too hard at the plate and in the field.

“When you get [to Bluefield], everything happens really fast, and you try to impress everybody around you,” he said. “The whole time I should’ve been letting the game come to me instead of trying to force it.”

Locastro said he consulted with his former head coach George Valesente for advice during the summer. Valesente, who also played professional baseball in the minor leagues and has coached more than 30 professional players, said he kept telling Locastro to be patient throughout the summer.

“I told him too many guys work themselves too hard,” he said. “I always said things will work out if you play within yourself.”

Though he had adjustments to make, Locastro said he was comfortable with one transition: using wooden bats. Locastro played in a New Jersey summer baseball league in 2012, where he used wooden bats for every game.

“It was nice to have that experience, because sometimes it takes other guys a long time to adjust from using aluminum bats to wooden bats,” he said.

Since the Appalachian League exclusively consists of players who are in the first year of their major league career, Locastro’s teammate Mitch Nay said it was easy to bond, because all the players were in the same period of adjustment.

“It’s cool getting to meet other people from around the country, hearing their story and trying to work together to win ballgames,” he said. “Guys like [Locastro] always went out there with a chip on their shoulders and went out there every night ready to play and ready to win.”

Locastro’s numbers began to rise through July and August, and he began to hit leadoff and second in the batting order for the Blue Jays. In July alone, he hit for a .360 batting average, and he said he was beginning to feel more comfortable at second base. The team was also in first place in the Appalachian League East division until the final week of the regular season.

Though Locastro only hit one home run during the season, he said it was one of the most thrilling moments for him.

“I ran around the bases so fast,” he said. “I’m not a power guy, but it’s always special hitting your first home run as a professional.”

Of all the experiences in his first year, Locastro said his favorite was playing in the Mercer Cup series against the team’s in-state and county rival, the Princeton Rays. The Mercer Cup is an annual 11-game regular season series played between Princeton and Bluefield. This season, the Jays took the trophy back to Bluefield.

“It’s an incredible experience to hold up the six-foot trophy and bringing it back for the city you play for,” Locastro said. “It’s a big source of pride for both communities, and it’s special to see [Bluefield] get so excited during the series.”

As Locastro walked off the baseball field at Calfee Park in Pulaski, Va., for the final game of his rookie season, he wasn’t given much time to reflect on the end of the first season. When he entered the locker room, he was given a bus ticket and a 40-minute warning for him to collect everything.

“That’s when you start to realize how fast everything has gone,” Locastro said. “You make a lot of memories here, and when you finish your career, you’ll always remember where it started.”

Now that he is back in Ithaca, Locastro has an off-season plan assigned by the Blue Jays that includes a workout schedule and a diet regimen. Locastro said he has not had enough time to sort through the 100-page plan or figure out how he will balance the workout plan with his schoolwork.

Even though Locastro signed as a professional player, Valesente said he will help Locastro — as he has with other professional players he has coached — through the offseason program. However, he will take most of the fall to relax and recover from the season.

“Right now, he needs to shut it down for a while, but he’ll still be around to talk to the guys,” Valesente said. “Probably what he’ll do is he’ll come back in January, February and start working out with us before Spring Training.”

It may be the offseason for Locastro, but he said he feels the season never truly ends.

“I still have a lot of things to improve before next season,” he said. “I can take a little bit of time to rest, but I know I have to keep getting better, because you never know how long you get the chance to play [professional] baseball.”