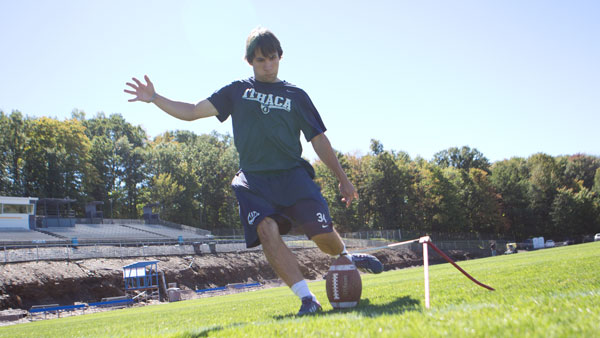 It was sophomore kicker Max Rottenecker’s first practice with the football team. He didn’t know his teammates, and the only thing his teammates knew about him was his German ethnicity. They watched him easily drill field goals from 35 yards, and after oohing and aahing at how he hit the long field goals with ease, they dubbed him “Das Booot.”

Lee Hamacher, sophomore wide receiver, was a teammate of Rottenecker on the junior varsity team last season. Hamacher said he took to the nickname and ran with it.

“He loved it,” Hamacher said. “He liked it so much, he changed his handle on Twitter to das booot. When we won our JV Empire 8 championship, his shirt on the back has ‘das booot’ on it with three O’s.”

Rottenecker was born and raised in Bochum, a city with more than 370,000 people in the west of Germany. He didn’t play football until he went to Meyers High School in Wilkes-Barre, Pa., for a one-year foreign exchange program when he was 16. He said the only prior exposure he had to football was watching old episodes of “Home Improvement” and playing an old version of the “Madden” video game series.

“I didn’t grow up with the game, and I wanted to play it at some point,” Rottenecker said. “I wanted to try out, and it turns out I kick the ball pretty well.”

Rottenecker joined the team at Meyers and became its starting kicker. He was named to the all-conference team and hit the game-winning field goal for the homecoming game.

At the end of his one-year exchange at Meyers, Rottenecker returned to Germany to finish his schooling. When he completed his final year, Rottenecker said, he chose to go to college in the United States because he would have failed the physical fitness tests required to get into German universities because of his inability to swim or do gymnastics.

Rottenecker only applied to two schools in the U.S.: Kings College, near his host family in Wilkes-Barre, and Ithaca College, for its sport media program. He said the experience convinced him to continue playing football in college.

“It was a lot of fun, and I loved that year and playing high school football there,” Rottenecker said. “I just applied to Ithaca [College] for fun, and they came back to me and accepted, and I was like, ‘Guess what? I’m going to do this.’ The year abroad definitely contributed to me ending up here.”

After enrolling at the college, he sent videos and statistics from his high school games to the Bombers coaches, who invited him to try out. Despite this opportunity and having arrived to campus in July 2012, Rottenecker said he had to wait about a month before playing because of paperwork issues.

“I was able to walk-on and be on campus pretty early, but I couldn’t play because I had to get physicals and all that,” Rottenecker said. “It was kind of bad having to do all the international formalities while I heard the airhorn during practice, and it was really tough, because I wanted to get out there and play.”

Once Rottenecker got onto the field, he impressed the coaching staff, earning a spot on the travel roster just three weeks into the season. He never had the opportunity to play with the first team but was the kicker for the JV team last season. For this season, Rottenecker will be the team’s long-range kicker and kickoff man.

Hamacher said Rottenecker has exceptional range for a Division III kicker, and it showed as he converted field goals of 37 and 41 yards in the Bombers’ opening game win against Moravian College on Sept. 5. The 41-yarder was the longest field goal for the Bombers since October 2011.

Rottenecker is still working on his consistency, but his range will make him the long-range kicker, which should give the Blue and Gold more opportunities to score. Last season, the South Hill squad only attempted four field goals of 30 yards or more and only converted two of those. Jack Mrozinski, special teams coach who recruited Rottenecker, said the German kicker expands the team’s kicking range.

“Max gives us the extra five to 10 yards that is inconsistent with a lot of kickers at the DIII level,” Mrozinski said. “Last year, Max had the leg for the distance, but it wasn’t always going through the uprights. He has honed the back end of his game and has taken the role very seriously.”

Rottenecker will split the place-kicking duties with junior Garrett Nicholson, who earned an honorable mention for a preseason All-American award from USA College Football. Nicholson said he and Rottenecker are content with sharing the kicking responsibilities for the season.

Nicholson said the two are happy to be partners but said he has been continually trying to improve his kicking range since the beginning of his collegiate career. He said he added five yards to his range from last season, which creates a grey area for the Bombers in which either kicker can be used.

“There’s a cushion between Max and I where sometimes [the coaches] have to decide,” Nicholson said. “They’re going to pick one of us. It’s all based on the wind, the distance and the atmosphere of the game.”

While both said they try to help the other improve, they each admitted that their influence is limited because of individual kicking styles.

One of the quirks to the Bombers’ kicking game is that each kicker has his own holder. Senior quarterback Phil Neumann holds for Nicholson while Vito Boffoli, junior wide receiver, holds for Rottenecker. Boffoli said Rottenecker trusts him as his exclusive holder.

“It’s funny, because as a receiver, it’s unusual that I’m holding instead of a quarterback,” Boffoli said. “There are obviously a lot of good holders, but he always wants me out there. He will always say, ‘No, Vito’s my holder,’ which is really awesome to hear from a kicker who is killing it right now.”

Mrozinski said Rottenecker has improved greatly since arriving at the college, but one uncertainty he has with Rottenecker is whether his performance could fall off.

“He has a chance to be a very, very good player and an All-Conference Player. He has the ability, now it’s just the matter of having a great mental game,” Mrozinski said. “If he is in a slump, how does he get out of it? If he misses one or two, now what do you do? … The routine has to be maintained, and if he can maintain it through his time here, he will have a very good career.”

Portions of this article were contributed by Meghan Graham.