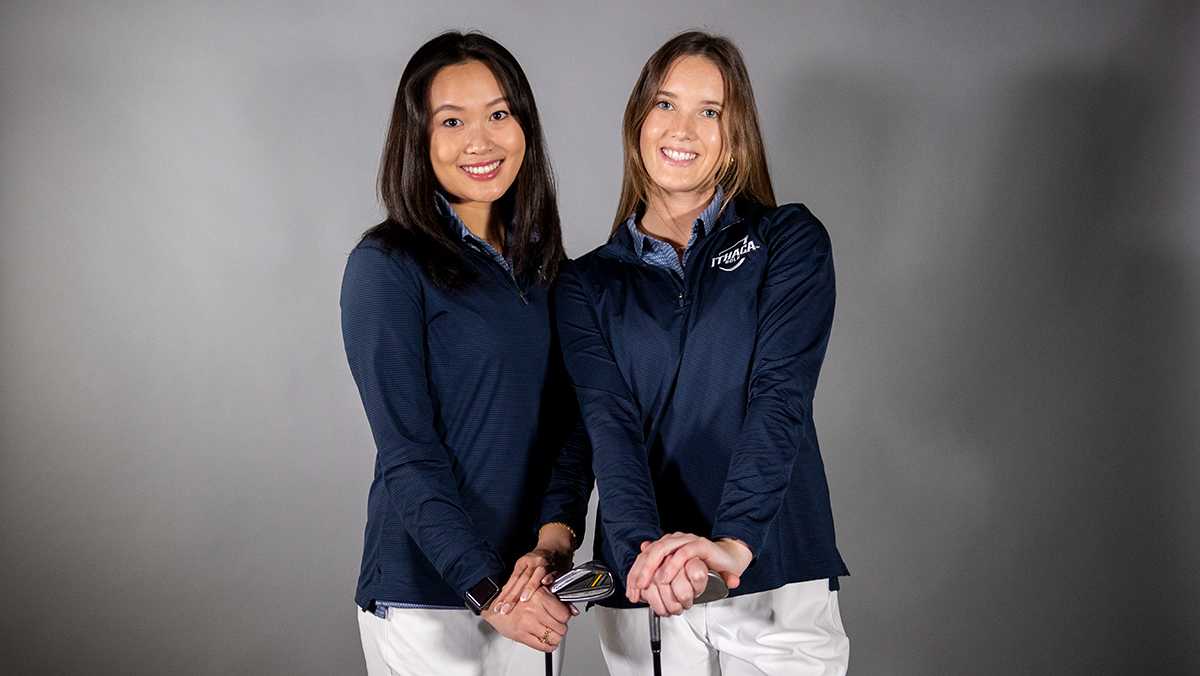 The 2022 Ithaca College golf team is a tightknit group primed to defend its 2021 Liberty League title. The tournament win was the first conference championship win for the college since moving to the Liberty League in 2017.

The team consists of five members, including two seniors, two juniors and one freshman. Seniors Katie Chan and Caitlin McGrinder have been playing for the golf team since they were freshmen. As they get set for their final season, they have also found themselves taking on mentorship roles for their younger teammates.

“This is my fourth year, so it’s nice to see my other teammates grow, especially the younger ones,” Chan said. “We do have a freshman, and it’s really nice to see how she’s going through the same experiences as I have.”

McGrinder said she hopes the younger players know they can come to her or Chan for anything, on or off the course.

“I’ve definitely learned a lot going through the years, so I’ve definitely changed from freshman year to now,” McGrinder said. “So I just always make sure to help them out where I can and avoid where I went wrong my first couple of years when it comes to games, practice and mentality towards the sport, and just hoping I can shape them into a better golfer and student overall.”

To practice for the upcoming season, the golfers have been lifting weights twice a week. Cold weather does not prevent the team from practicing because it also goes to the Athletics and Events Center to utilize golf simulator machines. In addition, during spring break, the team will travel to Florida for practices before the spring season commences in April.

Head coach Keith Batson said he expects juniors Mary Gersec and Cristea Park to have strong performances this season. He said the pair of golfers have been improving during their first two years at the college and expects even more improvement this season.

“I am really looking at Mary Gersec and Cristea Park to be our 1A and 1B players,” Batson said. “They both have continued to improve their averages during their career at [the college]. Both of them are on the cusp of breaking [below] 80 for their average score. I am expecting big things from both Mary and Cristea this spring.”

Batson also said that he has high hopes for freshman Rheanna Decrow’s play this spring and hopes that she will be an integral part of the season.

“I am expecting to see [Rheanna] really shine this spring,” Batson said. “She has a ton of potential, and she has been working hard this winter and updating her equipment as well.”

The primary goal for the team entering this season is to continue the momentum from the end of last season, McGrinder said.

“We won [the Liberty League championship], which was really exciting for us,” McGrinder said. “That was one of our biggest accomplishments as a whole.”

Chan said she wants the team to get closer so the members can provide better support for each other. Golf is an individual sport, but the team earns wins or losses based on the sum of each golfer’s score.

“Our team goals are, since golf is so individualized, for everyone to come together,” Chan said. “We are a very close team — there’s only five of us — so we know each other well and we understand everyone’s individual goals. But as a team, I think that we can work together on encouraging one another in achieving our personal goals and making sure we’re pushing each other to make sure we’re making these improvements for our personal records.”

McGrinder said a major differentiator in this season is the reintroduction of two-day competitions, where teams play the same course two days in a row and scores are added at the end of the second day. Previously, one-day competitions had been implemented due to COVID-19 regulations.

“It’ll be exciting to have those two-days back, to have two days of competition,” McGrinder said. “It really changes the playing field.”

And with this greater competition comes the return of greater rivalry. The Bombers’ tournament victory in 2021 broke the five-year streak by New York University (NYU).

“NYU will be our toughest team in our conference,” Batson said. “They won the national championship a couple years ago and are usually a top 10 team in the country.”

Guidance and lessons learned from senior golfers may guide the team to greater victory this semester, McGrinder said.

“Golf is very mental, so if you’re not mentally in it, it’s going to be the worst time of your life,” McGrinder said. “And that was one of my toughest battles freshman year. If you have a bad hole, it’s really hard to get out of it. Learning just how to approach, each shot is a new one and just moving on from a bad hole, I’ve gotten better at controlling my emotions and not getting upset about the first hole. That’s something that just comes with maturity with the sport.”

The team will start its spring season April 2 when they travel to New Castle, Pennsylvania, for the Westminster College Invitational.