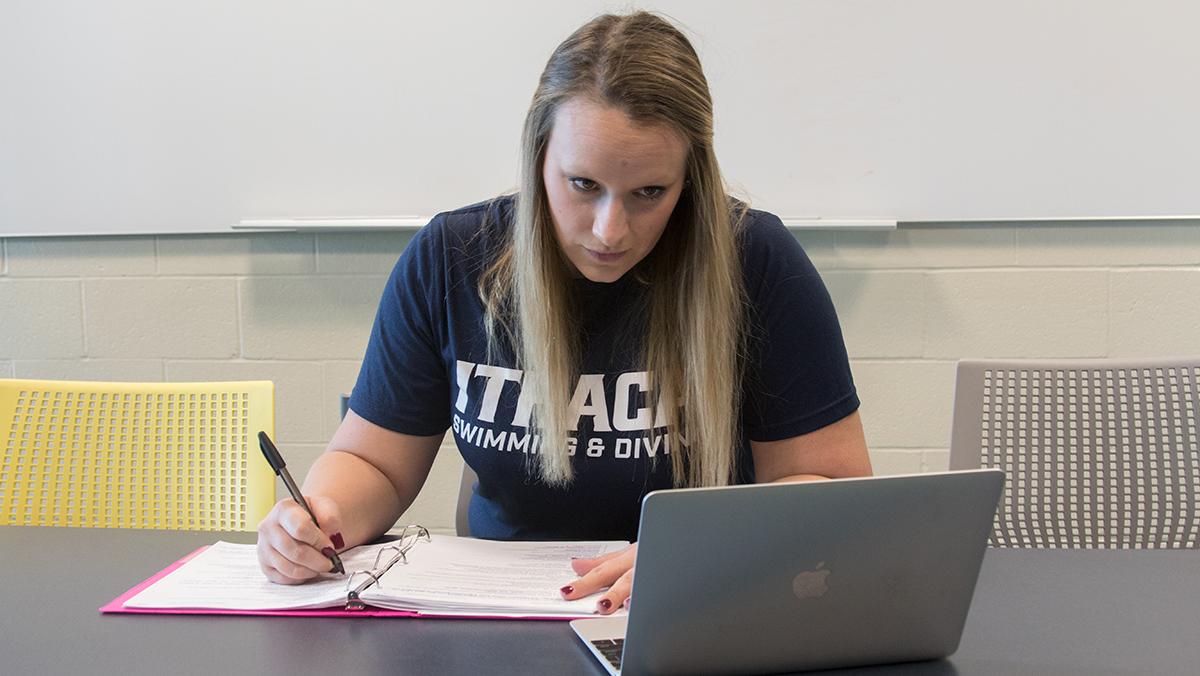 At 6:30 a.m., second–year graduate student Victoria Blakeslee’s alarm goes off, signaling the start of another hectic day. Blakeslee heads to work for five hours at Chipotle and then darts home to change and get ready to meet with the team she consults at Cornell University as part of her sports psychology master’s program. Once her hour at Cornell finishes, she heads to the Athletics and Events Center to coach the Ithaca College women’s swimming and diving team for two hours.

Despite this, many graduate coaches continue to coach even if they have to take on extra jobs on top of their busy schedules. Blakeslee said she wanted to work with the team even though she was not being paid because she knows the experience will be valuable in her career. 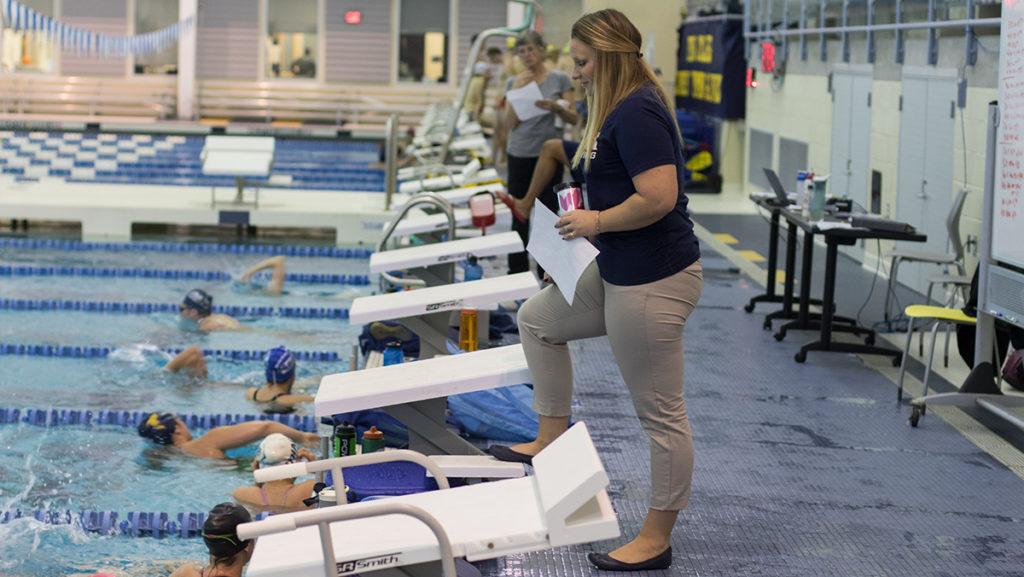 “We hope that once a student transitions from being a full to part-time student — and wishes to remain coaching — that the athletic department can find some funding for them as student employees, to maintain the coaching ranks in order to be paid for the activities they are doing,” Ives said.

Ives said there are certain factors he looks for in potential graduate assistants.

“We first select students based on their academic achievements,” Ives said. “That includes their GPA, their GRE scores, what’s on their resume, what other sort of academic achievements have they done, research projects and so forth. We select a pool of these candidates, and then we look at their coaching achievements. If we have a candidate that we think is really strong, we pass along their resume and application materials to prospective coaches.”

Out of about 20 applicants, about five graduate students are selected for the assistantship each year, meaning they will get most of their tuition paid for in addition to compensation for up to 15 hours per week. They are allowed to volunteer for another five hours a week with their team but are not allowed to work more than 20 hours a week total due to federal law.

First-year graduate students have to adjust to having a full course load, along with the 15 hours a week, and sometimes more, of working with a sports team at the college. These 15 hours can include practice, traveling to the games, game time, meetings with coaches, administrative duties and recruiting prospective students.

Those who are not selected for an assistantship can volunteer with an athletic team or seek an internship or other positions within the Office of Intercollegiate Athletics. 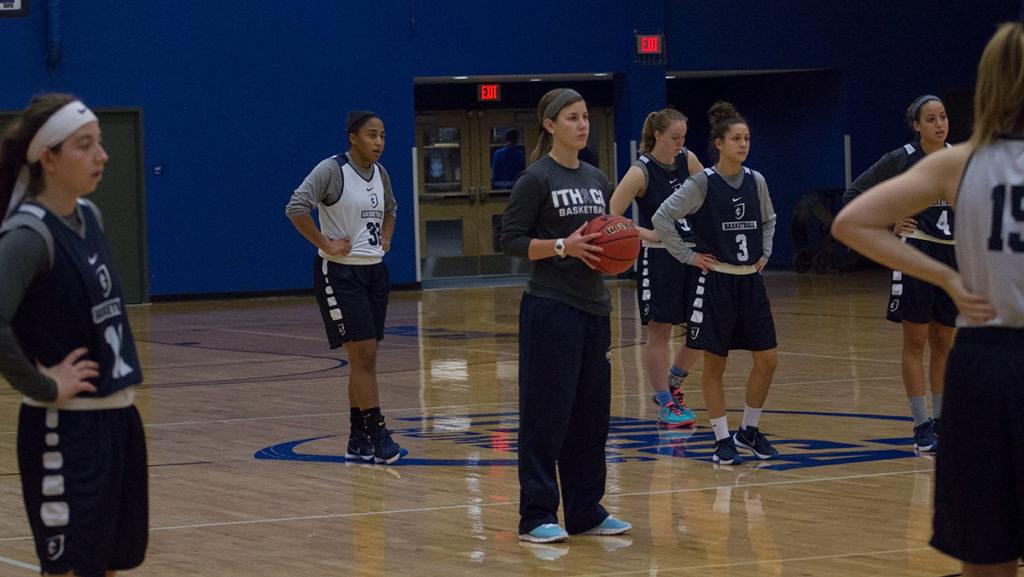 Second–year graduate student Maddie Ehrich received a paid assistantship last year for basketball, a sport she has been playing since the age of 6. She said her days usually consist of attending graduate school classes, meetings with the head and assistant coaches, and practices. After practice, she’ll meet with individual players as needed before returning to her house to begin her homework.

“I’m used to the basketball schedule now,” Ehrich said. “If there’s not practice from 3 to 5, then what do I do with myself? That’s when I’m supposed to be at basketball.”

“For me, it’s not really taking up time; it’s more of I have the opportunity to work and put in this much time into it,” Burdorff said. “I know coaching is more of a 24/7 job, and that is what I’m prepared for, so it’s not one of those things where it’s taking up my time. It’s more of I am able to spend my time doing this and learn more and more.”

Burdorff said his previous coaches had a strong impact on him, which caused him to want to pass that impact on to younger athletes. 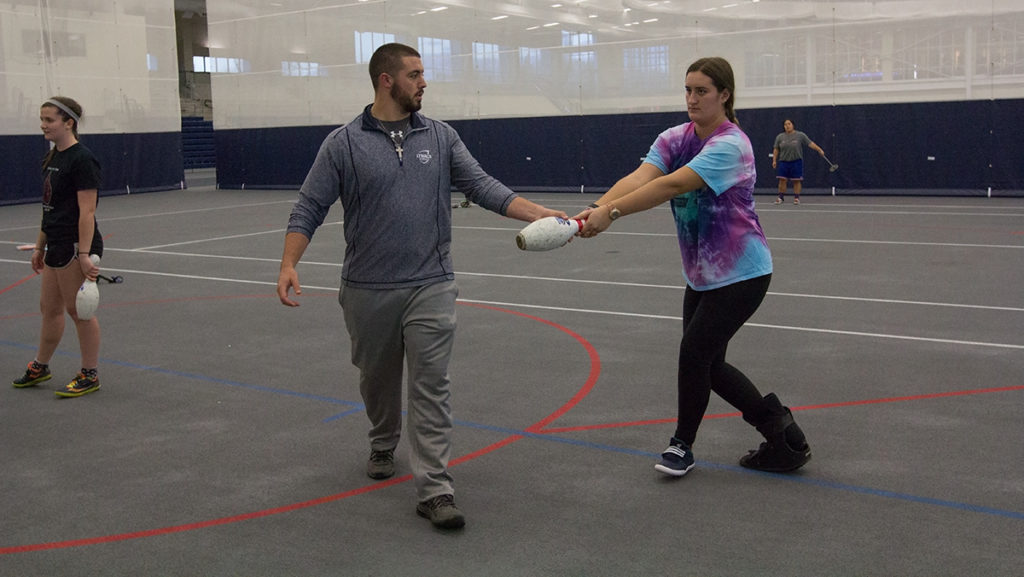 “Becoming a coach, for me, is more than just an athletic thing,” Burdorff said. “It’s more of I want to make a difference in athletes’ lives, especially in a key point in a lot of their lives, which is college, where you learn to grow over those four years into a mature person and human being as well as an athlete and a student.”

Ives said the students who complete these assistantships learn how to make a difference in athletes’ lives.

“Successful doesn’t necessarily mean, ‘Oh, now they are working NCAA Division I championship teams’ — a lot of these coaches, students, don’t want to go that way,” Ives said. “They want to stay at the Division III level or Division II level because that is the environment they feel really comfortable with. They think it’s an awesome environment, and so they are in these positions. From that perspective, I think we are incredibly successful with our GA’s.”