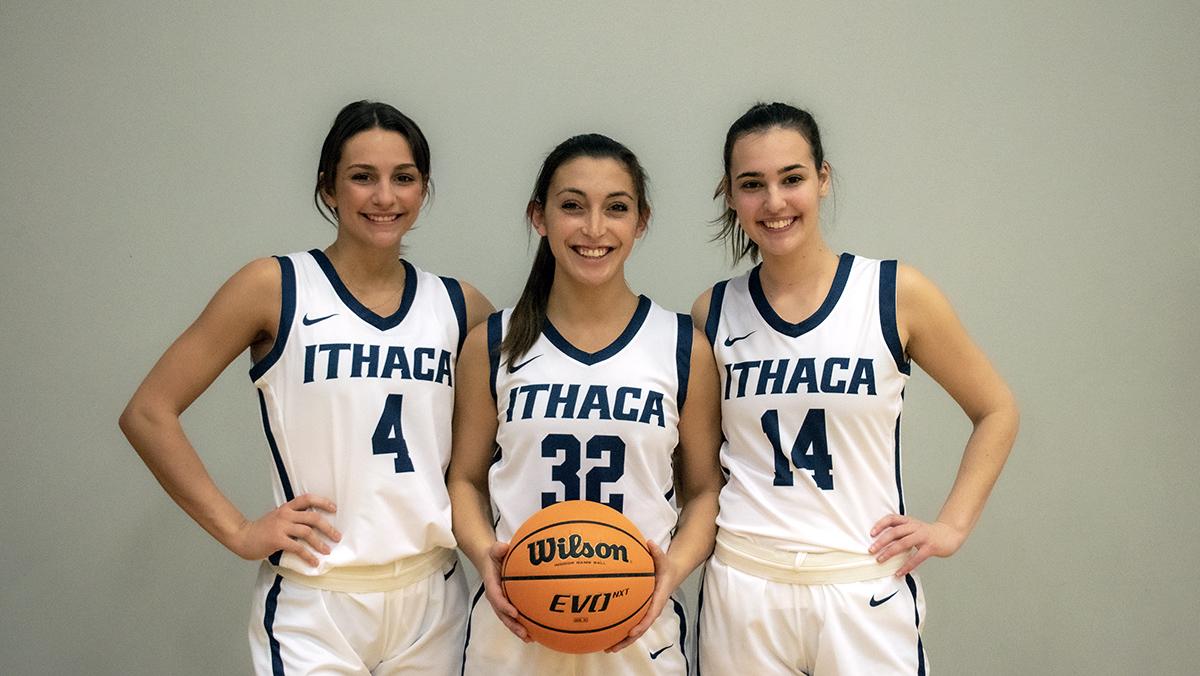 As the Ithaca College women’s basketball team continues its dominant 17–3 start to the season, the leadership off the court from the team’s graduate students has played an important part in the team’s success.

Graduate students Kelly Lamarre, Megan Yawman and Grace Cannon decided to come back for another year of basketball on South Hill. This season marks the first since the 2018–19 campaign that a graduate student was listed on the team’s roster, with current assistant coach Jordan Beers ’18 being the lone graduate student that season.

Each of the graduate students have contributed to the program’s recent success, being a part of the teams that won Liberty League Championships in 2019 and 2020. Yawman has started in every game this year. Lamarre has appeared in 20 games in her tenure and was named to the Liberty League All-Academic team in the 2020–21 season. Cannon also recently became the 15th player in program history to record 1,000 career points, in the Bombers’ 67–44 victory against Clarkson University Jan. 15.

She said she dedicates this accomplishment to coaches who helped her and trusted her along the way.

“I wouldn’t have scored those thousand points without any of them,” Cannon said. “My coaches have trusted me since I was a freshman, being able to give me significant minutes that he usually doesn’t give freshman.”

Cannon also gave credit to her former teammates, saying she is particularly grateful to her teammates during the 2018–19 team that went on an NCAA tournament run.

“They trusted me that I would deliver and produce when we made it, when we went to the Elite Eight,” she said. “Overall, just the trust and having those people trust me, it just builds my confidence even more, and I think that’s what has really increased as I’ve gotten older and gone through the program.”

Lamarre said that she admires the tight-knit connection among the team and that there is a focus on creating a family environment regardless of class year.

“We came back, yes, because we wanted to pursue more from an academic standpoint, but we also wanted to play together again,” Lamarre said. “So I think that’s just kind of a testament of how close we really are.”

Although Yawman tends to play one of the more vocal roles on the team, she said she wanted to take a step back and let more voices be heard to make sure everyone felt like a part of the team.

“I feel I’ve been able to lead in every way I wanted to,” Yawman said. “I feel I kind of took a step back before our season started and allowed people to kind of find themselves as leaders and then, once our season started, I feel I just, kind of, did what I felt like I needed to do for the team which is definitely be more vocal and lead-by-example leadership style.”

Yawman’s commitment to the game was shown by her decision to play for the Bombers for one more season. She said she made the decision to pursue a master’s degree in sports psychology last March and did not want to make the workload an excuse for her not to play anymore.

“I feel having basketball is my number one priority always,” Yawman said. “Throughout my five years here I think it has sent, like, a pretty good message about how this program should be run.”

Cannon said the biggest obstacle to coming back for another year was that her evening classes cause her to miss more practice time with the team than usual, something that Lamarre faced too. However, just like Yawman, she did not want any obstacles to play a part in her final year of playing.

“I wanted to make it a point to show my dedication to the team that when I was there for that hour that I was going as hard as I could,” Cannon said. “Making sure every rep would count and that you cannot notice when I was at practice that I had missed practice the day before … I think that really shows my dedication and commitment to the program that I could still get my classes done and miss practice, but also not have that affect my basketball in any way. And I think Kelly and I both did a great job at that.”

This year marks Dan Raymond’s 22nd season as the head coach of the program. With the strong leadership and experience amongst the graduate students on the team, he feels they have added great value to the program and its success this season.

“Having Kelly, Grace and Megan back has been invaluable,” Raymond said. “It’s really hard to put a finger on exactly how much value they brought in regards to leadership because they’re the ones that have the experience so it’s been huge to have them here.”

Junior Camryn Coffey showed admiration for their love of the game and the program itself. Knowing that coming back for one more year was not something they had to do, she said she is inspired by their dedication to the team’s success thus far this season.

“It just goes to show how much they care about the program and even beyond the personal level of wanting to finish out your career,” Coffey said. “I think sticking around for the program was really great that they did that, and I think they do play with a little bit more of inspiration to help the program since they decided to stick around.”