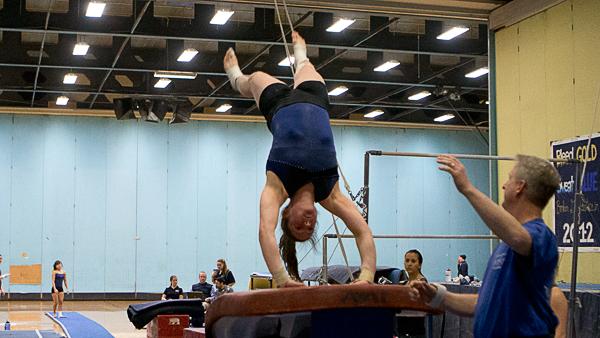 A 0–4 start may be looming over the gymnastics team, but their scores are improving weekly, and the Bombers have remained optimistic as they keep their eyes on the national championship.

Sophomore Valerie Cohen said because of the loss of a large senior class and injuries on the team, the squad has been working hard to keep up with the training and competition needed.

“We don’t have the depth we had last year because we graduated so many seniors, and we have a lot of injuries,” Cohen said. “It’s been a struggle to balance working really hard to achieve what we want to achieve and staying healthy.”

The team has lost four gymnasts to ankle and back injuries so far this season. Junior Meredith Daniels, who is a contributor on the beam, vault and floor exercise, has been hampered by a back injury, and her return to the lineup is still unknown. Daniels said while it is hard to watch from the sideline, she is happy to see the team pushing through injuries and constantly increasing their scores.

“The team has been doing well as it is, and I’m so proud to see everyone working hard with my setback in the midst,” Daniels said. “It definitely makes me eager to get back into competition and do what I can for the team.”

The South Hill squad also entered this season without six of last year’s graduating upperclassmen, including Jessica Bolduc, Ithaca College’s most decorated gymnast. With the addition of seven freshmen and multiple new lineup positions available, the team is adjusting to the pressure of performing.

To improve their routines and comply with the demand of the competition season, the team has slightly altered their training. To decrease the strain on their bodies, the team alternates between difficult practice days and fine-tuning days, where they focus on the smaller details. The training changes have benefitted the team each week, especially against Springfield College last week, where they posted a 181.100, their highest score of the season.

The Bombers have also increased their mental training to remove nerves that could stand in the way of competition. One of the most common exercises used by the team involves the women standing at each apparatus and visualizing their routine so they know what needs to be done. With the help of mental training, graduate student Tiffany Grube and Cohen were able to place 1st and 2nd on the floor exercise.

Senior Chelsea Robie said while nerves do sometimes get in the way of stellar performances, the increase in mental training has suppressed these fears and helped the team improve each week.

“Nerves are really a big deal in gymnastics, and I think they have been one of our biggest battles,” Robie said. “But the fact that we have increased our score at each meet is a good sign that we are getting better, and it isn’t hurting us.”

Along with the constant improvement because of the training changes, Cohen said the team keeps Head Coach Rick Suddaby’s words in mind to continue to push them forward.

“[Coach Suddaby] always says there are two things you can control: your attitude and your performance,” Cohen said. “Controlling what we can control, getting the rehab we need and learning our limits are what we need to reach our peak.”

With Cortland on their schedule this weekend, the Bombers can see no better time than now to shine. Robie said their improvement will continue each week, and she is optimistic that it is going to be another successful season for the team.

“It is not as important for us to win or lose as it is to improve, and we have been doing that,” Robie said. “We are happy with what we have been doing, and I think our future is really bright because we have pinpointed what the judges want from us, and we can make sure we work on those things.”