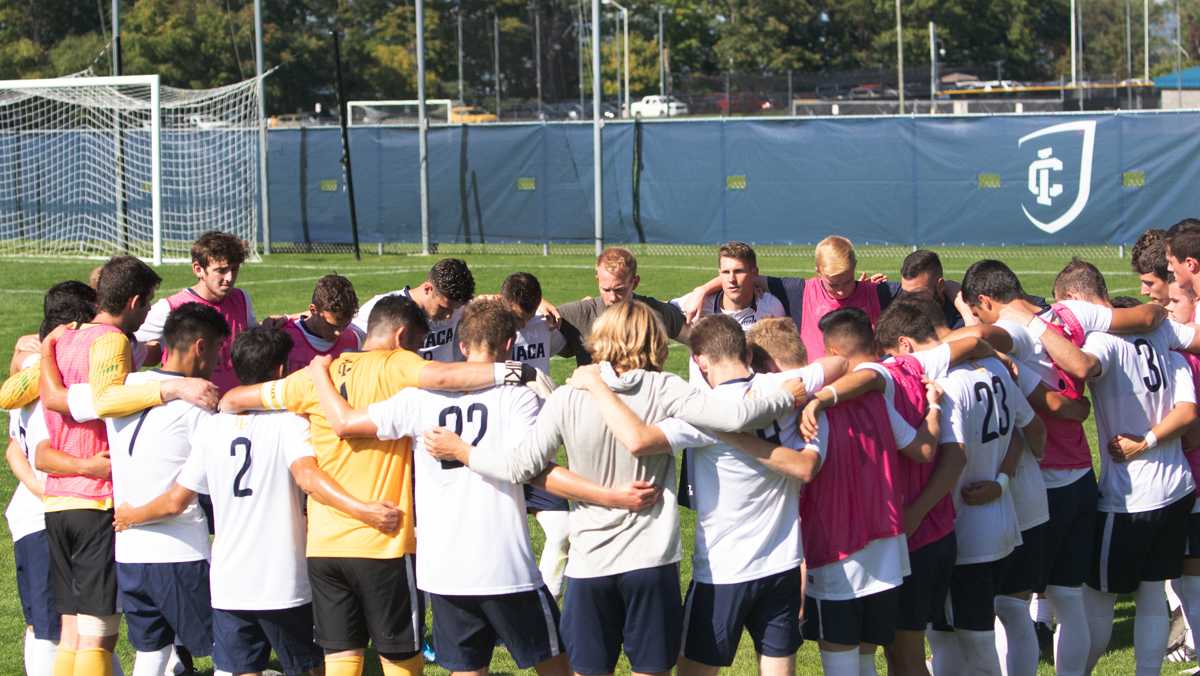 Shehanee Fernando/THE ITHACAN
The Ithaca College men's soccer team shares a motivational moment in a huddle before their game on Sept. 24, the Bombers currently hold a record of 6-1-1.
By Emily Adams — Sports Editor
Published: September 26, 2019

When Kyle Dezotell, head coach of the Ithaca College men’s soccer team, took over the program in 2017, the Bombers had not had a winning season since 2008. After just three years, the squad is ranked No. 12 in the country for Division III and has a record of 6–1–1.

Dezotell was hired in June 2017, so the incoming class of freshmen that year were recruited by the previous head coach, Patrick Ouckama, who left South Hill after two seasons to coach the New England Revolution Development Academy. Dezotell said he was drawn to the college because of the resources of the athletic department as well as the soccer team’s history of success from the 1990s and early 2000s.

“It’s a challenge to take over a new program, but it’s also a challenge from the student-athlete side, and I understand that,” Dezotell said. “I probably brought in new ideas and new expectations and standards than what was previously here.”

Dezotell’s first season was an adjustment year, both to a new head coach and a new schedule, because it was also the Bombers’ first year in the Liberty League. The team went 7–8–2, keeping the trend of Ouckama’s two seasons, which both ended with seven wins.

Senior captain Max Barish said Dezotell’s arrival during his sophomore season was a difficult transition, but he said the members of the team were involved in the hiring process after Ouckama’s departure, and this made the change easier.

“We got to meet with the candidates, and our whole team really liked Coach Dezotell,” Barish said. “We really felt like he could be a great leader for our program. We were fully in support of him and are still in support of him.”

Dezotell said his transformation of the program began with major roster changes at the start of the 2018 season. For his first recruiting class, Dezotell said, he wanted to make his mark and increase the talent level of the team. He recruited 15 members from the Class of 2022, filling nearly half of the 33-man roster at the start of last year.

The influx of freshmen in 2018 also meant significant cuts. Eight athletes from the 2017 roster were not members of the 2018 squad, including then-senior Alexander Brosnihan, who earned Empire 8 Second Team All-Conference honors in 2016.

Dezotell worked for 10 years at Norwich University, a private military college in Northfield, Vermont. The university has a cost-of-attendance price tag of $58,195. Dezotell said he learned how to recruit effectively while working at Norwich because the location, military status and cost all made it more difficult to attract top prospects.

“That showed me that there’s not a lot of tricks to recruiting,” he said. “It’s just a lot of hard work and putting yourself out there. Then when you come to a place like Ithaca College that has all the resources in the world, it’s a heck of a lot easier to recruit here than it was to [Norwich].”

Anthony Mariano, athletics director at Norwich University, said Dezotell’s experience both as a player and a coach combined with his connection to his athletes makes him a strong recruiter and coach.

“He gets a lot of respect from his players,” Mariano said. “They not only saw him as a good coach and an excellent player. He has a way about himself that student-athletes flock to, and then once they were here, he showed them a lot of respect and communicated very well with them.”

Dezotell said the coaching staff focuses on attracting student-athletes who are on the borderline of being able to compete at a lower-level Division I school or a top-tier Division III school. He said that all five members of the Class of 2023 — his second recruiting class — considered at least one Division I school during their recruiting processes.

“We try to say that as much as it’s a Division III school, we can focus more academically here than they could at a Division I,” Dezotell said. “We want our kids to study abroad and take advantage of every academic and social opportunity here. We still think we can perform athletically at a really high level.”

Dezotell said that communicating his expectations early and often to recruits and current athletes has allowed him to establish a group of players that are committed to his values and goals for the program.

“We always say we’re trying to build a program capable of winning a national championship,” Dezotell said. “We probably lose some students because of it, but we tell prospective student-athletes, ‘Don’t come to Ithaca College if you’re coming because you think it’s going to be easy and fun to play Division III soccer. Only come if you truly aspire to become the best soccer player you can be.’”

Mariano said Dezotell’s ability to communicate his goals and values to his athletes sets him apart from other head coaches.

“He’s been able to take positives from all the places [where he has coached] to build what his philosophy is today,” he said. “I think his players see from him his love and joy of the game and I think that really filters down to them as well. It’s infectious.”

Sophomore defender Thomas Pierce has been a starter for the Bombers since his freshman season. Pierce said Dezotell’s vision for the Bombers attracted him to South Hill.

“I really trusted his process,” Pierce said. “He’s a really great coach. He kind of gives it to you straight; he’s not afraid to tell you when you made a mistake, but he’s also very positive and high intensity.”

This season, the Bombers have already proven their ability to compete with the top teams in Division III. They defeated then-No. 5 Messiah College 1–0 on Aug. 31 and battled then-No. 10 SUNY Cortland to a 2–2 tie Sept. 21.

Barish said the upperclassmen have worked hard to communicate Dezotell’s high expectations to their teammates, and they have all bought into the competitive mentality. He said this intensity and work ethic are the reasons for the squad’s success this season.

“It’s definitely difficult, in a positive sense, to be a part of our team,” Barish said. “It’s very demanding in terms of what you have to do physically and mentally to compete at this level. We’ve really elevated the standards with strength and conditioning and play, and you’re seeing the results on the field.”

Dezotell said he did not expect the team to become a national force just three seasons into his tenure.