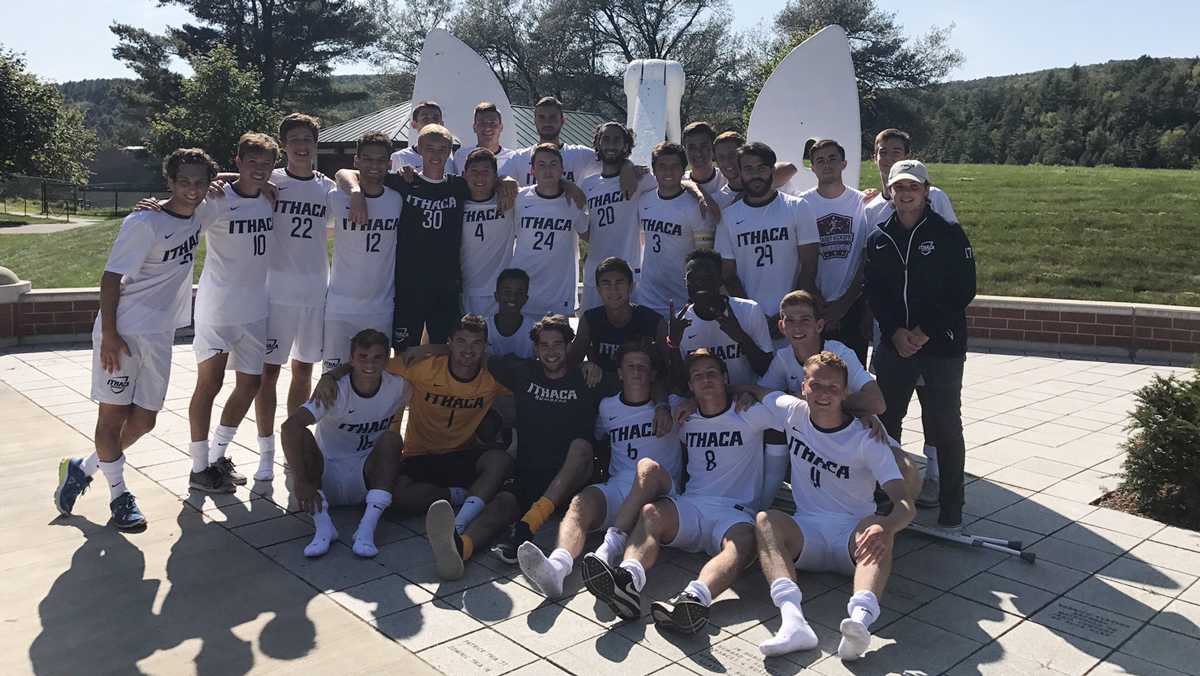 COURTESY OF KYLE DEZOTELL
The men’s soccer team kicked off their season Sept. 1 and 2 at the Cadet Kickoff Classic at Norwich University in Northfield, Vermont. The Bombers won the games 2–1 and 5–0. Head coach Kyle Dezotell started the tournament in 2012.
By Cal Dymowski — Staff Writer
Published: September 13, 2017

Ithaca College’s men’s soccer head coach Kyle Dezotell had never sat on the visitors’ sideline at Sabine Field, the soccer stadium at Norwich University in Northfield, Vermont, where he previously coached for 10 years.

Dezotell sat on the visitors’ side for the first time on Sept. 2 when he led the Bombers onto the field for a game against Southern Vermont College. This was Dezotell’s first time back coaching at Norwich, causing him to realize that a new chapter of his career was beginning and that he is tasked with rebuild a different program.

Spending 10 seasons at the helm of Norwich, Dezotell posted a 130–63–18 record to make him the program’s all-time winningest head coach. He never had a losing season and led Norwich to a Greater Northeast Athletic Conference Championship title in 2008.

The challenge with the Bombers, Dezotell said, will be turning them into winners again, since the team has not claimed a conference title since 2012. In the past seven seasons, the Blue and Gold have had six losing seasons. The Bombers have started this season 3–1–1, the team’s best start since 2012.

Dezotell said his philosophy on team culture will vary from ones in the past.

“Every coach is going to be different,” he said. “I don’t necessarily care about the past, good or bad. I’m a big believer in culture, and I think to be successful, you have to surround your program with winners.”

Dezotell said he aims to make the team more focused on winning and and that he will try to push the team in a different direction this season.

“You don’t allow yourself to lose,” Dezotell said. “When you have the culture and the winning mentality instilled in the program, it becomes part of the makeup of your program.”

On Sept. 1 and 2, Dezotell and the South Hill squad traveled to Vermont for the Cadet Kickoff Classic at Norwich University, a tournament Dezotell had started in the 2012 season while coaching the Cadets.

“We had always gone to tournaments, and we saw the possibility to host our own,” Dezotell said. “We created it with the idea that early in the season, teams might be looking for a tournament to play in. I was there for three years with that tournament, and my teams never lost a game in that tournament.”

That undefeated streak continued with the Bombers’ knocking off the Wentworth Institute of Technology 2–1 on Sept. 1 and then shutting out Southern Vermont College 5–0 on Sept. 2 to finish the Classic undefeated.

Derek Dunning, director of athletic communications at Norwich, said Dezotell’s impact was profound not only for men’s soccer but for the athletic department as a whole.

“Kyle is one of the most respected coaches we’ve had here at Norwich,” Dunning said. “He was willing to go the extra mile to make us feel that what we’re doing is helping out his program and that we’re having an impact. The day he told me he was leaving was one of my tougher ones here. He developed a really great culture here.”

When Dezotell started researching the college, he said, he was impressed by the strength of Bomber athletics.

“Just looking across the board and seeing how other programs do remarkably well, competing in NCAAs and for conference championships, I had my interest piqued,” Dezotell said. “I think highly of this athletic department and this institution, and the things they do here are top notch.”

Bombers’ junior midfielder Tyler Hiney said he got the impression Dezotell loved being back at Norwich but that Dezotell will be at the college for the long run.

“Through interviewing him and just getting to know him, he definitely came to Ithaca because he loves it, and as much as he loves Norwich, he’s here to stay,” Hiney said.

Junior defenseman Diego Sanchez said that from day one, Dezotell and assistant coach Braden Studelska have made an effort to incorporate more team activities into the program’s schedule to build team unity.

Hiney said Dezotell’s positive energy has created a family culture at the college, something Dezotell had also done at Norwich.

“I love the guy,” Hiney said. “He’s so confident, super positive. He inspires all my teammates and makes them more confident in everything they do.”

Sanchez said that with the program now gaining a winning mentality, he believes success is just around the corner.

“I think coach Dezotell has done a great job so far,” Sanchez said. “This is the best start this program has had in a while, so while the team continues to do ‘the little things,’ we are going to succeed.”