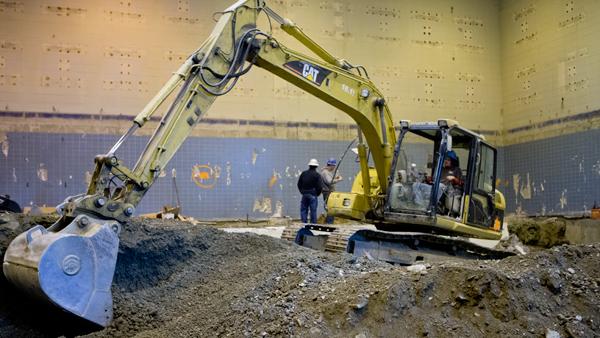 Basketballs pound the hardwood as the women’s basketball team goes through its shooting drills. Rihanna plays in the background, but the music and the balls are drowned out by the construction sounds outside the Ben Light Gymnasium. It serves as a constant reminder of the circumstances that have caused issues for the teams that use the facility throughout the semester.

Since renovations on the Hill Center began in December, some players have raised concerns about the amount of dust both in the air and that has settled on the gym floor, making it slippery. Public facilities around the gym have also been shut down. This has caused teams to alter their practice and game locations and to move all postseason games.

According to Tom Ryan, Hayner Hoyt project supervisor, the renovations are currently 15 percent complete. The project, which is estimated to cost $15.5 million, is expected to be finished in December.

Construction has been ongoing in the western end of the building, as the foundations for two floors of class and lecture space are being laid where the pool once was. Teams will receive new locker rooms and team spaces as well. Inside the gymnasium, three of its four surfaces are being completely redone beginning next week. Mike Lindberg, associate director of intercollegiate athletics, said renovations will also improve technology and aid student media.

“We’re trying to do some things with technology in regards to webcasting and more media visibility and opportunity for Park School and Sport Media and Management,” Lindberg said.

While teams are optimistic for the renovations, they have also voiced concerns about the conditions created by the construction.

Sophomore wrestler Alex Gomez and the rest of the wrestling team have had parts of their locker room and shower sealed off as construction workers worked to remove interior walls that contained asbestos. Gomez said he has developed difficulty breathing and believes the construction caused it.

“They really aren’t sealing off things that they should be sealing off,” Gomez said. “They’re really doing the most construction in the locker room, so it isn’t safe to be changing and hanging out.”

The basketball teams have dealt with other issues while using the gym, as the men were forced to share showers with their opponents after their games.

Senior guard Eli Maravich said both teams were forced to move practice to the Fitness Center during the first week of the spring semester because players were having coughing fits from dust buildup in the gymnasium. Sophomore guard Ally Mnich said the construction has also affected their practices.

Lindberg said professionals have been consulted, and there is nothing dangerous about the conditions in the Hill Center.

“We would not do anything that would jeopardize our students’ health, and if there was, we would have shut this thing down awhile ago,” Lindberg said.

Senior forward Andrei Oztemel said practicing next to a construction site made him uncomfortable, regardless of it being cleared by the college.

“It was a little uncomfortable practicing in the gym right across from red tape from the pool area with asbestos marking,” Oztemel said. “It wasn’t really an ideal situation, and they had professionals come in and say it was okay to play in. If somebody gets sick, then what they say doesn’t really matter.”

Lindberg said he consults Couture and other representatives from the school as well as project managers when making decisions about the center’s usage during the renovation. He said he relays information about the project to each coach.

“We go over what the plan is, deadlines are, what has to be moved, how’s it going to affect them, if we’re taking anything offline and access,” Lindberg said. “We meet on a regular basis. We share information with our coaching staff, and in turn it gets shared with the student athletes in general.”

The school and construction firm have made efforts to improve the conditions in the Hill Center during the semester. This included the installation of barriers and negative air machines that are designed to filter the air. Couture said problems with construction are sometimes unavoidable.

“When you’re renovating a building and people are still in it, it’s not a perfect situation, but we’re working really hard to minimize any discomfort,” Couture said.

The women’s basketball team has had to play several games on the road because of the construction. Had the gym been available for use in the postseason, the women would have hosted the Empire 8 Championships and probably the first two rounds of the NCAA Tournament, because they were the top ranked team in their region. However, Mnich said she is confident the Blue and Gold can win at any venue.

“We’re kind of bummed that we can’t host it,” Mnich said. “It’s always better to be on your home court, but it’s not about where we play. As long as we have the first seed, we’re pretty much set.”

Next week, Ben Light Gymnasium is slated to be ripped up, and the remodeling process is expected to begin. Ryan said the gym, complete with new hardwood and bleachers, will be ready for use and dust-free in August.

Men’s basketball Head Coach Jim Mullins said the renovations have been inconvenient and credited his players for going through them well. Mullins said in the end it will all be worth it.

“I’ve been waiting for this for 20 years,” Mullins said. “I think people that have been here, and quite a number of them have been here longer than I, were looking at it saying it’s about time. With that said, you have to deal with some inconveniences, and I think the good far outweighs whatever inconvenience we have. The end result is worth inconveniences at this time.”